America Went Over the Fiscal Cliff Long Ago 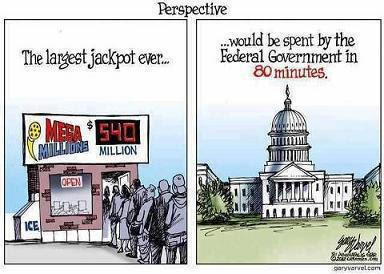 
I doubt that President Obama will compromise with the House Republicans on anything that might be done to avoid the January 2nd “fiscal cliff” that kicks in with higher taxes for everyone.


Obama has made it clear that increasing the tax rates on “millionaires” is his goal and he made that clear throughout the campaign. The income that would be generated from the increased rates would generate enough money to run the nation for about a week or so at most. In politics perception often trumps reality. And those “millionaires” are mostly middle class folks earning $250,000 or more.


As Chris Cox and Bill Archer, two veterans of the House, chairman of key committees, now in the private sector, wrote in a November 26 Wall Street Journal commentary, “The actual liabilities of the federal government—including Social Security, Medicare, and federal employees’ future retirement benefits—already exceed $86 trillion, or 550% of GDP” (Gross Domestic Product, i.e., the total the U.S. earns from the sale of all goods and services annually).


We are so far passed the fiscal cliff that the U.S. is unlikely to be able to borrow its way out of this huge debt. Cox and Archer said that “Borrowing on this scale could collapse the capacity of global capital markets—and bankrupt not only the programs themselves but the entire federal government.”


“When the accrued expenses of the government’s entitlement programs are counted, it becomes clear that to collect enough tax revenue just to avoid going deeper in debt would require $8 trillion in tax collections annually.”


By adding $6 trillion in debt during his first term, it seems to me that Obama’s goal has been to bring the nation to financial ruin. He added more debt that all the combined presidents before him. He squandered billions on bailouts of General Motors and Chrysler, loans to “green” companies, and increases in programs like food stamps. He cut off new sources of income from the energy sector and, with them, the prospect of jobs that would be generated. At one point he advocated developing algae—pond scum—as a new source of energy.


The total amount of earnings from individuals and corporations is not sufficient to cover the debt and operating expenses of a federal government that has been steadily expanding since early in the last century. Cox and Archer noted that “all individuals filing tax returns in America and earning more than $66,193 per year have an adjusted gross income of $5.1 trillion. In 2006, when corporate taxable income peaked before the recession, all corporations in the U.S. had a total income for tax purposes of $1.6 trillion.”


That’s a total of $6.7 trillion available and we have more than $8 trillion per year in liabilities. The U.S. is borrowing $4 million a day to pay the interest owed on its debt and other liabilities.


The tax system of the U.S. was created in 1913 with the introduction of the income tax and hasn’t seriously been updated since 1986, just over a quarter century ago. As Mitt Romney told a fund-raiser during the campaign, 47% of Americans pay no income tax at all. He caught a lot of flack for telling the truth.


On Election Day, responding to exit polls, 63% of Americans said they were opposed to increasing taxes. Two years earlier when the midterm elections returned power to the Republicans in the House where the Constitution mandates that all spending bills must originate, a compromise resulted in the extension of the Bush tax cuts for two years. Even Obama said it would be a mistake to raise taxes during a bad economy. He doesn’t have to compromise now and he won’t.


I have no doubt that Obama will blame whatever occurs regarding the “fiscal cliff” on the Republicans, but a January 2011 article by Paul Bedard in US News and WorldReport spelled out a plan by the House GOP to eliminate $2.5 trillion in spending over the next ten years. It’s not that Republicans haven’t a plan. It’s that Obama’s plan is to raise everyone’s taxes and keep on spending.


As Grover Norquist, president of Americans for Tax Reform and an opponent of all tax increases, wrote in mid-November, “Obama’s present demand is that the top two marginal tax rates be increased to 39.6% plus the 3.8% Obamacare tax surcharge for a top rate of 43.4%. The death tax would also jump back to 55%, capital gains tax would jump from 15% to 23.8%, and the tax on dividends would increase from 15% to 39.6%”, more than double its present rate.


“If Obama follows through on his threat,” wrote Norquist, “and refuses to extend the Bush tax cuts, then there would be an automatic $500 billion tax increase beginning on January 1, 2013, that would total $5 trillion over a decade.”


In plain words, Americans who still have jobs, who have invested in the stock market, and who have any savings, will be impoverished within a decade, if not sooner. The middle class is already paying 50% of what they earn in income taxes, payroll taxes, state taxes, property taxes, and taxes on gas, telephone use, and other levies.


Obama has not talked of cutting government spending, relying on the automatic “sequestration” that would begin in January. His Secretary of Defense, Leon Panetta, called the effect on the U.S. military “catastrophic” though the cuts would reduce what Norquist calls “the Obama debt machine” and would in theory strengthen the economy.


I say “in theory”, but federal regulations in 2011 added more than $231 billion in regulatory costs to private businesses and state and local governments, adding up to 133 million hours of paperwork, according to the American Action Forum. Tons more regulations are in the pipeline, particularly from the Environmental Protection Agency. When you add in the 28 taxes hidden in Obamacare, it is clear that there will be precious little money left over for anything than the bare necessities of life.


Americans have been ill-served by their government, composed of those elected to exercise good judgment regarding the economy. It has been going on for a very long time and now the bill is coming due.


America is living in the greatest debt bubble the world has ever seen. I suspect most are completely unaware of it.


America went over the fiscal cliff decades ago and now is in free-fall. Life here and around the world is going to get very ugly.

I honestly feel Obama does not like America and wants to take it down. He wants us to be a Communist country and still the majority of us don't see it. Your cartoon of all the Titanics hitting the iceberg said it all I believe we are a country of takers and morons.

I have beeb writing these same thoughts for several years as the outlines of Obama's intentions became clear in his first term.

Americans have been deluding themselves--with the help of the media--as to the threat he represents.

If Obama manages to raise taxes on the rich, the rich will either start hiding their money, or magically start earning less. Either way, tax revenue will drop. This has been proven over and over. In the UK, for eg, where the previous PM hiked taxes to 50% on millionaires, they 'lost' 10 000 of the 16 000 millionaires the year the tax took effect. In France where the socialist government are hiking taxes to 75% on those earning more than 1 million Euro, the rich are fleeing to more tax-friendly countries, taking their wealth and businesses with them. Socialist governments only know how to spend and raise taxes on EVERYBODY - they have no idea how to grow an economy - a foreign concept to them. They would rather make the poor poorer to make the rich less rich. And then you look at all those rich Liberal Democrats who supported Obama - useful idiots and hypocrites the lot of them. As an example, Costco (huge Obama supporters) are going into $3.5 billion debt this financial year to pay out dividends on a 'special payment' so that they can avoid the Obama tax hikes next year. Isn't this just typical of brain-dead liberals? They campaigned with Obama for the rich to pay more taxes and share the load, but avoid paying their 'fair' share any way they can when they have to put their money where their mouth is. So much for the moral high ground of these people. Anyone who listens to these frauds are as stupid as they are. I can smell the hypocrisy from here. http://online.wsj.com/article/SB10001424127887324705104578149012514177372.html#articleTabs%3Darticle

In other words, this is the end of America as we know it, which was clearly the Obama Regime's goal from Day One in office.

So what's the plan after the inevitable collapse of the economy and the destruction of the productive element in America?

It could be flight out of the country.

It could be fight and civil war.

It could be strike and the producers putting their feet up on the coffee table waiting for the inevitable collapse of federal power.

But one thing is for certain in the next several years - when the economy finally bites the dust, the only way the Feds have to sustain themselves in power is by making slaves out of the productive element of the American people and forcing them to produce a minimum to sustain federal power.

The GULAG concentration camps are already built and need only staff and prisoners.

Welcome to the United Socialist States of America where the new national anthem is the International and the parasites rule.

Lime Lite...I said the same thing about Costco to my wife when I heard of the cash payout. Nothing like Obama supporters trying to avoid higher dividend taxes!

Ronald... A little while ago you wrote that a contact of yours said there will be no civil war. I don't know what is going to happen but I don't expect it to be good. I do predict riots in this country when things get really bad and that will happen before too long. The glass is below half empty.


"Ronald... A little while ago you wrote that a contact of yours said there will be no civil war. I don't know what is going to happen but I don't expect it to be good. I do predict riots in this country when things get really bad and that will happen before too long. The glass is below half empty."

My federal friend is not a prophet.

Since 2005, I have predicted a Second U.S. Civil War at some future point, but I'm not a prophet either.

Alan's prediction is that Americans will ride the totalitarian express all the way to the end of the line like the "Good Germans" did in 1933.

The truth is that we Americans are at the mercy of events, as the political will to change the drift to Communism is not in operation.

So what will happen in the next chapter of American history?

Will it be fight, flight, passive resistance, or will we patriots be "Good Germans" and join forces with the American Hitler?

But like you said, "I don't know what is going to happen but I don't expect it to be good."