A Glimpse of the Fiscal Future 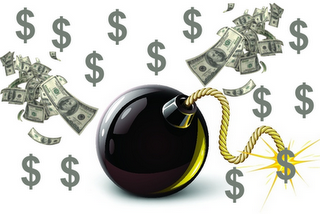 
A recent Rasmussen poll indicated that 53% of likely voters still think Obama is doing a good job. And that’s the bad news.


A majority—though a slim one—reelected Obama, but in a democracy that’s enough. As for myself, if I were a psychiatrist, I would have to conclude that I have been clinically depressed since November 6, 2012. In truth, anyone reading my daily commentaries knows that, so far as the future of the nation is concerned, I have been in a very bad mood for many years, but the pace picked up when Obama was reelected.


A torrent of words have been written and spoken about the “fiscal cliff”, a term referring to the largest increase and expansion of taxes in the nation’s history that will occur on January 1, 2013. We live in a nation with an insane $16 trillion debt and a deficit that requires the U.S. to borrow $4.8 billion every single day just to keep paying the interest on the debt and keep the government functioning.


It’s like being in a bullring and only having a spoon to defend yourself as the beast charges in your direction.


Kimberly A. Strassel, a columnist for The Wall Street Journal, has one of the sharpest minds when it comes to politics. On December 7th, she had some thoughts about “Obama’s Famous Tax ‘Victory’” and they are worth sharing in part. “To read the current fiscal-cliff coverage,” said Strassel, “President Obama holds the upper hand is poised for the ‘victory’  of winning an increase in tax rates”, but “few have stopped to consider how paltry that victory is likely to be. For a short-term win on this ideological issue, President Obama may well cede most everything else.”


Putting it in perspective, Strassel noted that Obama “has argued his entire presidency that America’s debt hole could be filled by soaking the rich. He’ll now get his way, in a bill that likely provides $800 billion in revenue over 10 years, or $80 billion a year…that’s 7% of the $1.1 trillion deficit Mr. Obama ran in fiscal year 2012 alone.”


Sequestration will require a number of cuts to domestic and defense spending, but the nation’s debt is not going to go away without substantial reforms to the tax code and the so-called “entitlement” programs, Social Security and Medicare. The name applied to them is typically misleading. They are not entitlements because workers are required by law to pay into them and are, in theory, only getting that money back when they become senior citizens or ill. I say, in theory, because they are going broke to a point where they may cease to exist without changes.


As for taxing “the rich”, the income that will generate will only pay for about a week’s worth of what the government is presently spending.


Then, on January 1, says Strassel, “He then faces four years and 20 days of a presidency marked by his ownership of a faltering economy, a spiraling debt problem, automatic sequester cuts, no prospect of further spending or tax revenue, and a debt-ceiling bomb. If that’s the president’s idea of ‘victory’, maybe it’s what he deserves.”


And maybe what Americans deserve for electing and reelecting him to the highest office in the land without the mainstream media never once vetting his resume for the job or the truth about his life, his affiliations, and his ideology. If Obama had been a Republican, he would have been savaged for the past four years for his many failures regarding the economy and a foreign policy that has seen the Middle East turn into a region that threatens the peace of the world. The scandals of “Fast and Furious” and Benghazi have been swept under the rug while those who voted for him watched “Glee” and “Dancing With the Stars.”


If you want to better understand what has gone terribly wrong with America, I recommend you read Stephen Moore’s new book, “Who’s the Fairest of Them All? The Truth about Opportunity, Taxes, and Wealth in America.” ($24.95, Encounter Books)


Moore, who is a member of the editorial board of The Wall Street Journal and a frequent guest on Fox News, asks the following questions:


Is it fair that those who work forty, fifty, and in some cases, sixty hours a week to make ends meet, have to pay taxes to support an unemployment insurance system that pays those who haven’t worked in two years?


Is it fair that big banks got huge government subsidies because they bought trillions of mortgage-backed securities, but the small community banks they compete against got nothing?


Is it fair that the richest 3 percent of taxpayers now must pay more in federal taxes than the bottom 97 percent—and yet they are disparaged for not paying enough taxes?


Is it fair that after the first two years of Obamanomics, the poor are poorer, the middle class has shrunk, and median incomes have fallen?


Is it fair that nearly four out of ten American households now pay no federal income taxes at all?


No, it is not fair, but one of the President’s themes throughout his first term and during the 2012 campaign was about fairness. It made sense to a lot of people who have no idea how their lives, their investments, their savings, their medical care, and their future has been put in jeopardy in his second term and for many years to come if major reforms are not made.


If the record of Congress is any indicator, they will not be. Now that you have looked over the cliff at the future, perhaps you may have cause to be as depressed as I am.

Since misery loves company you need to know that you are not alone in your depression following the election. I think we would have been filled with hope if Romney had been elected but that is not to be. Nero fiddled as Rome burned and Barack will be golfing in Hawaii as the USA burns.

Nicely put, Hugh. It still ends up being a disaster.

Alan, I understand you being depressed about America's future. I don't even live there and I'm depressed for you. However, what will be will be. Maybe America needs to bash her head to learn from her mistakes. Obama ruling the country on fairness is exactly what liberals do - they rely on emotion to make decisions instead of their heads. The only thing liberals know about business is sticking their noses in everybody else's. But, you're stuck with this status quo for the foreseeable future so sit back, relax and get the popcorn ready. Make peace with the fact that the Republicans WILL be blamed for whatever is coming to America. Obama can do no wrong. He has the MSM on his side, covering his tracks, and making this all about the Republicans. If it were me, I would have asked the House to vote present on Obama's tax hike bill and let him own something for once. By standing up for the 'rich' the Republicans are only playing into the hands of these stupid liberals who still believe in unicorn farts and fairy dust. So, head up Mr Caruba, and stop making yourself sick about this. It is out of your control. Just keep doing what you're doing and stay safe, and let the cards fall where they may. There is much to say and predict about America's future and unfortunately it's nothing good. The Founding Fathers are probably scratching their heads and asking how this all turned out so badly - for what they fled has now come to pass in America.

It is not about fairness, it is about class warfare, the same old tried and true method that has been tried by all socialist and communist countries. It will not owrk here either.

Only when the entire system comes crashing down on everyone and we all have to earn a living will the chattering classes realize they have been duped.

This is what it 'feels' like to be in the rational minority. And in this case, I would say that 'depression' IS a rational response. Each and every day, I am dumbfounded by what the political/media 'class' is capable of. The latest of which is the illustrious 'divider-NOT-uniter' standing in front of the goons in Detroit. Thanks so much LimeLite for that upbeat prognosis of yours...I always wonder just WHERE 'they' are talking about when 'they' say the makers will just take their business elsewhere...WHERE pray tell, would that be?

Is it fair that my ENTIRE take-home pay last year (plus some) went to pay income taxes for myself and my husband? And I have no idea where the extra couple thousand of extra taxes being added on in 2013 will come from. I honestly feel I know how it felt to be a feudal serf; there is no escape from the nobility demanding their payment for letting you exist.

Chipmonk: I doubt that most Americans realize they are paying out half their earnings in federal and state taxes at this point.

I hope that 2012 brings them out into the streets with torches, tar and feathers for the political class.