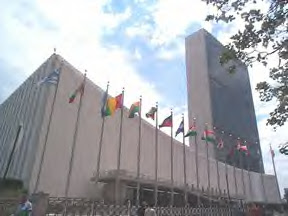 
Following the end of World War II in 1945, the idea of a United Nations, an international body devoted to avoiding future wars must have had a lot of appeal despite the fact that, not that many years earlier, the League of Nations that emerged after World War I had proven to be a toothless failure.


In the years since, the United Nations has prevented major world conflicts, but it has done little to curb others. It seems to exist to give its blessing to them and the U.S. has long acted as if it could not engage in a war without its permission. From the Korean War in the 1950s to Vietnam in the 1970s, to the wars in the Middle East, the U.S. has ceded its sovereign right to pursue wars in what it regarded as its national interest. Korea and Vietnam were proxy wars during the period of the Cold War between the U.S. and the Soviet Union.


The wars in the Middle East have been a response to 9/11, first in Afghanistan and later the need to remove the Iraqi dictator, Saddam Hussein, who had waged war against Iran and Kuwait. The U.S. actually lent support to the war against Iran because we have technically been at war with Iran since 1979 when our diplomats had been seized and held hostage. Kuwait is an oil-rich nation and, if Saddam had been allowed to take over, he would have turned his attention to Saudi Arabia and other Gulf nations. In the Middle East, it is always about oil. And now we must add to that equation, the rise of fanatical Islam.


In all the cases cited, the United States has had to do the heavy lifting, the bulk of the fighting. World War II left us the only superpower in the world and the only one with atomic bombs. We put Western Europe back on its feet as a counterweight to the Soviet control over Eastern Europe.  When it collapsed in 1991, the balance of power changed, but by then China was already on the rise economically, having embraced capitalism, but retaining Communism as its governmental system. The dictators who ran the Middle East, many of whom the U.S. either tolerated or lent support, ran into a buzz saw of discontent from their oppressed populations.


One of the largest cliques in the United Nations is made up of Middle Eastern, African and other largely Muslim nations. They and others like the Chinese and Russians have no love for democracy or freedom. The result has been the rollout of treaties intended to (1) generate enough income to make the UN financially independent and (2) exert a centralized global control over commerce and the individual lives of people worldwide.


The UN is the center for the entire global warming/climate change hoax and its Kyoto Protocols to reduce so-called greenhouse gas emissions. It is the home of the Intergovernmental Panel on Climate Change which just finished its 18th conference to continue its intention to transfer money from the developed nations to those that are not. The U.S. Senate unanimously rejected this treaty in 1997 when it was initially proposed.


There is, however, a Law of the Sea Treaty (LOST) that is seeking ratification by the U.S. and is supported by the Obama administration. It would give the UN control over offshore drilling, requiring the U.S. to pay half of its royalties to unelected UN bureaucrats who could spend it any way they want. Moreover, it would require the U.S. to make our offshore drilling technology available to any nation that wanted it and to do so for free despite the millions spent to develop it. One fears that a lame duck Senate might ratifies it. The most recent effort to ratify it was rejected in July.

What most Americans do not know is that international treaties trump the U.S. Constitution. They have the same status as constitutional law and must be enforced by U.S. Courts. Thus, our most sacred right as a nation, our sovereignty, is eroded by such treaties. It was the reason that the Congress rejected membership in the League of Nations. We should have done the same with the United Nations, but for decades since we have provided a quarter of its budget while having just one vote in the General Assembly.


There is no doubt in my mind that the worst of the UN treaties is the current effort to exert control over the Internet. This month, representatives of the 193 member countries of the International Telecommunications Union will meet in Dubai to discuss ways to control the international exchange of Internet traffic across countries and how to extract money from it.


Gorden Crovitz, writing in The Wall Street Journal on November 25th summed up the danger this represents. “Having the Internet rewired by bureaucrats would be like handing aa Stradivarius to a gorilla.”


He noted that “The Internet is made up of 40,000 networks that interconnect among 425,000 global routes, cheaply and efficiently delivering messages and other digital content among more than two billion people around the world, with some 500,000 new users a day.” More importantly, “The self-regulating Internet means no one has to ask permission to launch a website, and no government can tell network operators how to do their jobs.”


It is an irony that the Internet had been the platform by which Egyptians came together to overthrow its longtime dictator, Hosni Mubarak, but which has led to the takeover by the Muslim Brotherhood and a new constitution that is based on sharia law; a huge step back to the seventh century that makes women chattel and endorses slavery. One step forward, ten steps back.


There are other UN treaties that need rejection and the U.S. Senate this week did reject the Convention on the Rights of Persons with Disabilities which former Sen. Rick Santorum, joined by Sen. Mike Lee (R-Utah) denounced as a “direct assault on us and our families.” It, too, was an attack on our national sovereignty and the rights of parents to determine how their children are educated and cared for. It was signed by President Obama in 2009, but the Senate’s action avoided its ratification. A treaty on small-arms control would render the Second Amendment null and void.


For years conservatives have called for the withdrawal of the United States from the United Nations. That act alone would likely collapse this evil international institution. It won’t happen so long as the current administration is in power.

Ref:"In the years since, the United Nations has prevented major world conflicts"

Thats news to me??? Can you be specific and name one world conflict that the UN has prevented.
Thanks, Norm

Ref:"When it collapsed in 1991" (regarding the Soviet Union)

Storm'n, I used the term world conflicts to reflect WWI and WWII, as opposed to more narrow proxy wars like Vietnam and Korea.

Storm'n, you make a good point, but the former satellite nations have done what they could to maintain their independence. Originally they were a buffer zone against a resurgent Germany, but now that has been resolved as far as the Russians are concerned.

Alan, you ended with this:
"It won’t happen so long as the current administration is in power."
Is there one good thing any of us have to say about the current president? I think not!
Thanks for bringing up LOST as that is insane. All that is going on makes me think the earth in an instant started spinning in the opposite direction.

We should withdraw incrementally. For an organization that owes so much to us they sure are ballsy. Each time the UN sends us some ridiculous proposition it should be rejected and a portion of the funding we give them should be slashed. At $10 million a mistake they may be a little more diffident when dealing with the hand that feeds them.

I wonder how Al Gore feels about them trying to hijack his invention.....

Well said Alan. I have always maintained that the UN are a bunch of Mafia bully boys with only their interests at heart. And isn't it ironic that most of their so-called committees are filled with Dictators and radical Islamists - even on the Human Rights committee! What a joke. ALL Western countries should withdraw from this farce.