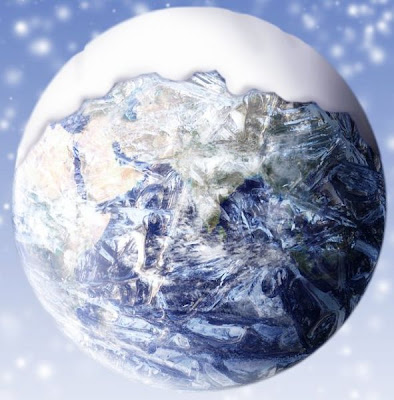 
Winter doesn’t officially begin until December 21, but winter has a mind of its own as does all of nature. While the United Nations charlatans gathered in Doha, Qatar to try to save its global warming hoax by first calling it “climate change” and then by fashioning a funding mechanism to transfer the wealth of developed countries to those who are not, winter has arrived “early” around the world.


That might just have something to do with the cooling cycle that has been active for the past sixteen years, “inconveniently” blowing a big hole in the global warming lies we’ve been hearing and reading since the late 1980s.


From IceAgeNow.info, a site by Robert W. Felix, the author of a book about ice ages (the Earth has been through quite a few in its 4.5 billion years), here are some recent news stories:


On December 1, “Heavy snowfall severs Russia” told of “Hundreds of drivers (who) were caught by surprise in a 40km traffic jam after an unexpected snowfall and heavy winds.”


On November 30, “Finland snowstorm causes blackouts” reported that “Tens of thousands of households were without electricity on Friday as the result of a storm that dumped heavy snow across southern Finland and sent winds gusting up to 27 meters per second, felling trees and downing power lines.” That same day, across the former land bridge between Russia and North America, “Fairbanks – Coldest back-to-back November on record” was a news item what reported “The mercury hit 30 below for the first time this winter at Fairbanks International Airport…”


On November 29, the news was about a “Severe snow storm hits northern Japan” during which it was “blasted by an intense snow storm causing widespread havoc to residents of Hokkaido and Northern Honshu.”


On November 28, “Snowfall paralyzes life in China” was the headline of a report that “China has experienced the biggest snowfall in 52 years. Snow caused power outages in 57 villages, brought down thousands of trees and killed numerous domestic animals. Temperatures fell by as much as 14 degrees below zero in some areas.”


You don’t have to be a meteorologist to connect the dots. It is getting colder in the northern hemisphere of the world. To those who would dismiss this, saying that Russia has always been famous for its winters, that is the equivalent of whistling past the graveyard.


In England, a November 29 report in The Telegraph, reported that “Councils are gearng up for what could be Britain’s coldest winter in 100 years, as sub-zero temperatures and snow follow days of downpours that have devastated large parts of the country.” The Met Office, England’s equivalent of the U.S. Weather Bureau, warned that “The forthcoming cold snap, caused by clear skies and northerly winds, could herald the start of a freezing winter.”


This was not unforeseen, however. In late January 2012, the British daily, The Mail, reported that “The supposed ‘consensus’ on man-made global warming is facing an inconvenient challenge after the release of new temperature data showing the planning has not warmed for the past 15 years. The figures suggest that we could even be heading for a mini ice age to rival the 70-year temperature drop that saw frost fairs held on the Thames in the 17th century.” England and much of the northern Europe and North America was gripped by a mini ice age that lasted from 1300 to 1850.


It is no secret to climate scientists that the sun is in what they call a “grand minimum” by way of describing relatively few magnetic storms, also known as sun spots. Few storms means less solar radiation and, since the sun is the primary source of heat for the Earth that means things get colder here. This is worth keeping in mind when the Secretary General of the United Nations or any other lying politician or alleged scientist tells you otherwise.

In a new book worth reading, “The Whole Story of Climate” by E. Kirsten Peters, the author brings a wealth of knowledge to the subject from the standpoint of a geologist. As to the claim that carbon dioxide emissions are the “cause” of a warming that is not happening, she points out that “The fact is, if human beings had remained hunter-gatherers throughout our entire history, never producing a single molecule of greenhouse gases through agriculture or industry, climate today would still be changing. It would be lurching toward higher temperatures, crashing toward vastly colder temperatures, or at least swinging toward something different from what has been. That’s just the nature of Earth’s climate.”


Preceding the introduction and rise of humans was an age known as the Pleistocene Epoch about 1.8 million years ago. It “was not a time of only monotonous cold. In fact, it alternated between long periods of cold—lasting roughly 100,000 years—and short periods of considerably warming times—lasting about 10,000 years.”


We humans are the result of the Holocene Epoch, a much more temperate, warmer period that followed the Pleistocene and, writes Peters, “From the Earth’s point of view, the Holocene is no different at all from other brief, warm intervals in the Pleistocene…” We are now about 11,500 years into this warmer cycle and, if the current cooling cycle continues and gets colder, we are knocking on the door of the next ice age.


Nor is this a problem only for the northern hemisphere. Southern hemisphere polar sea ice expanded in September 2012 to its greatest extent since satellites began measuring the Antarctic ice cap in 1979.

That’s what Robert W. Felix has been warning about in his book, “Not by Fire, But by Ice”, published initially in 2005. He’s not alone. Habibullo Abdusamatov of the Pulkovo Observatory of the Russian Academy of Sciences predicts that there will be a sharp drop in the temperature of the Earth starting in 2014. He’s predicting it will last about 200 years.


Just as the recent weather reports indicate, lower temperatures, greater snowfall, and other miseries of a colder Earth are in the future of the billions who live in the northern hemisphere. Bundle up.

Alan, don't you know all of this cooling is a result of the Australian Carbon Tax??? It is no coincidence that all this cooling has taken place since we started paying our great new tax in July this year. Why, even the Antarctic ice levels have been at record levels. Just let us know when we should stop paying the tax as we wouldn't want the world to cool down too much!