Forced to Live in Obama's World of Fantasy 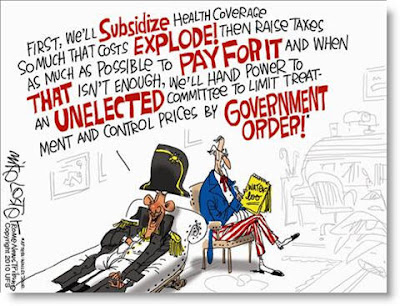 
The most difficult of times are when we are forced to live in the fantasy world of those granted the power to govern.


Obama’s primary fantasy is Marxism and it is summed up in his belief that a country prospers when it “redistributes” wealth from those who have prospered to those who may not even wish to work. It has brought down every communist/socialist nation that tried to make it work and it was most evident in Obama’s constant use of the phrase “millionaires and billionaires” during his first term along with the demonization of Mitt Romney as an evil capitalist. By Marxist standards, Obama was successful in the way the auto industry, banking sector, and, of course, the nation’s health system were essentially nationalized.


Yet another of Obama’s fantasies was rubber-stamped by the Supreme Court’s decision that Americans are now expected—required—to accept that it is permissible and reasonable for a man to marry a man and a woman to marry a woman. Anyone with an ounce of common sense knows that marriage has always been between the opposite sexes. To degrade the definition of marriage to mean it applies as well to two people of the same sex because they love one another, it the kind of sin that a greater power will not forgive.


Gay marriage is a corruption of the most fundamental rules of society—of any human society from the earliest days of civilization. Thirty-five States have banned it.


The other fantasy, the creation of the Marxist United Nations, is “climate change”, originally called “global warming” until it was exposed as a hoax. It is the instrument with which to destroy the economy of the nation in the name of saving it from “climate change.” Is there anyone in their right mind who actually believes that a tiny amount of carbon dioxide (CO2) in the atmosphere (0.038%) is responsible for all the hurricanes, tornadoes, droughts, floods and forest fires? One might as well declare that CO2 is responsible for red hair, for the chicken pox, for termites, or anything else you want to blame on it.


This Obama fantasy is authorizing the Environmental Protection Agency to generate a ton of regulations that will destroy the mining of coal and its use to produce electricity. Have we suddenly decided we don’t need electricity in America? That we can replace nuclear, coal and natural gas with sunshine and wind?


The Obama fantasy of the Patient Protection and Affordable Care Act—also known as Obamacare—provides far less protection and is far from affordable. In the future, patients will be given far less time with their physician and spend far less time in a hospital. They will become mere units to be processed.


Everything Obama told us about it before its passage late night on Christmas Eve 2009 was and is a lie. Why must we live with a law that is based entirely on lies? A law that is a tax though we were told it was not until the case was argued in the Supreme Court and miraculously became one. There are so many things wrong with Obamacare that whole books are being written about it, but it will ultimately cost some people their lives unless it is repealed.


If the government has technology that can store and analyze billions of phone and Internet communications, why can’t it develop technology to track those here on visas and work permits? In practical terms, every few years we need to provide a more functional path to naturalization and clear the books. As for the southern border, augmented border patrol capabilities are the only practical response. Yes, let’s keep out those who try to sneak in as best we can.


Yet another fantasy was Obama’s announcement that the war on terrorism is over, declaring that all wars have to come to an end. Most surely surrender is one way to end a war, but the Islamic Jihad is continuing and will for many years to come. His initial fantasy was that his election, articulated during his “apology tour” of Islamic nations, marked a change, but his support of Egypt’s president, Muhammed Morsi, indicates a strong tilt toward the Islamic Brotherhood and its mission of worldwide domination.


Finally, it is a fantasy that Barack Hussein Obama has any legal right to hold the office of President. His birth certificate is a fake. His Social Security number is a fake. Much of his personal history is a fake—nobody from Columbia University where he is said to have been a student recalls meeting him or having him in their classes. He is a fraud and he is being allowed to be President. That’s not just a fantasy. That’s a nightmare for all of us.

You do realize? Barack Hussein Obama is delusional, and quite likely one the verge of insanity..

I'm not a clinical psychologist but I stayed at a Holiday Inn a few years ago.. :)

Hey, that works for me.

The clear insanity on the Left (they were, after all, insanely deluded to adopt the unknown, characterless Obama as their leader) is a scientific fact. (And note that America has been repeatedly called upon to "adopt the unknown" without question, time and time again, ever since--always based upon Obama's airy, empty promises of only good results.) People have to understand:

The System Is Broken

Re the allegation that Obama's birth certificate is "a fake."


Obama’s birth certificate is not "a fake."

Only birther “experts” have called it forged, and they have not shown that they are even experts, much less fair and impartial. Those are two reasons why they are not believed by Ann Coulter, Glenn Beck or the National Review (or by Mitt Romney or Paul Ryan or Gingrich or Santorum or Huckabee).

Short-form birth certificates are created by a clerk reading the information from the document in the file, and filling out the computer form that generates the printed short-form birth certificate. The officials in Hawaii have confirmed that they sent a short-form to Obama. So, unless they are lying—and they were Republican officials–the only way that Obama’s birth certificate could have been forged was that it was forged in 2007 and slipped into the file just before the clerk looked at the file. That is not very likely, is it? And it is especially unlikely since at the time Obama was not even the candidate of the Democrats. He was still in the primaries at the time, and he was only a junior senator from Illinois.

And birther sites have not shown you these real experts.

Dr. Neil Krawetz, an imaging software analysis author and experienced examiner of questioned images, said:“The PDF released by the White House shows no sign of digital manipulation or alterations. I see nothing that appears to be suspicious.”

Nathan Goulding with The National Review: “We have received several e-mails today calling into question the validity of the PDF that the White House released, namely that there are embedded layers in the document. There are now several other people on the case. We looked into it and dismissed it.… I’ve confirmed that scanning an image, converting it to a PDF, optimizing that PDF, and then opening it up in Illustrator, does in fact create layers similar to what is seen in the birth certificate PDF. You can try it yourself at home.”

John Woodman, independent computer professional, who is a member of the Tea Party (who says that he hates Obama’s policies but found no evidence of forgery) said repeatedly in his book and in various articles on his Web site that the claims that Obama’s birth certificate was forged were unfounded.

Ivan Zatkovich, who has testified in court as a technology expert, and consultant to WorldNetDaily:“All of the modifications to the PDF document that can be identified are consistent with someone enhancing the legibility of the document.” And, by the way, when WND received Zatkovich’s article that said that he found nothing wrong with Obama’s birth certificate, WordNDaily simply did not publish it.

Jean-Claude Tremblay, a leading software trainer and Adobe-certified expert, who has years of experience working with and teaching Adobe Illustrator, said the layers cited by doubters are evidence of the use of common, off-the-shelf scanning software — not evidence of a forgery.“I have seen a lot of illustrator documents that come from photos and contain those kind of clippings—and it looks exactly like this,” he said.

Birthers’ claim that Obama’s birth certificate is false is well understood to be caused by their own motives—they hate Obama and would like to harm him.


And it is irrational (to say the least) to think that Obama’s relatives had enough money (Obama’s grandfather was just a furniture salesman and his grandmother a low-level employee in a bank at the time; and his father came to Hawaii on a free flight) or crazy enough to spend LOTS of money on a long and expensive and risky (incidents of stillbirths were high at the time) overseas trip for their pregnant daughter—–when there were perfectly good hospitals in Honolulu, Hawaii.

(Oh, and the government of Kenya has said that it investigated the “born in Kenya” claim, and that it did not happen.)

And, I'll bet you birther sites have not shown you this:

Nor have they even told you whether or not Obama's mother had a passport in 1961---did they? (And, most likely she didn't, very very few 18-year-olds had passports in 1961, and, if they had them, very very few pregnant women traveled late in pregnancy in 1961, and even fewer traveled out of the country ALONE---since WND has proven with a FOI Act request that Obama's father stayed in Hawaii throughout 1961.