Too Much Trayvon and George 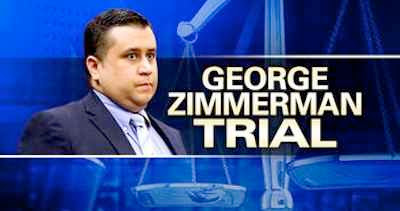 
From all that I have read and heard, Trayvon was a wannabe street thug with a taste for drugs, tossed out of school a couple of times, and George was a wannabe police officer who ended up on his back, getting his head pounded into the cement, and concluded Trayvon might just kill him. George should have left after calling the police. Trayvon should have kept going too. But people make bad decisions and it sometimes gets them killed or on trial.


The trial was a self-defense case from start to finish. That’s what the jury found even though Florida’s “Stand Your Ground” law wasn’t even introduced by Zimmerman’s attorneys and, even though race was not introduced as a factor during the trial by either the prosecution or defense.


The trial, though, was all about race.


As a student of history, I and others can tell you that race has always been a factor in the life of the nation. In America it divided the states and required a horrendous war to resolve. Even then, after the end of the Civil War and for a century more, despite Constitutional amendments to end slavery and extend full citizenship, race remained an ugly factor, especially in the South where Jim Crow laws were especially obnoxious. In the 1960s the nation had to revisit the issue of civil rights.


I know all that, but I still want the endless discussions about race to end now that the jury has arrived at a perfectly common sense conclusion that Zimmerman, straddled—not by a “child”, but by full grown young man—had no real option other than to shoot him or risk suffering further injury and possibly death.


It is passing strange to me that the killings of white men and women, boys and girls—often killed almost randomly—have not evoked such supposed “outrage” in neither the black, nor white, community. Indeed, they are treated as little more than brief local news. Why do we expect, barely report, and not even publicly condemn such killings when the racial component is reversed? 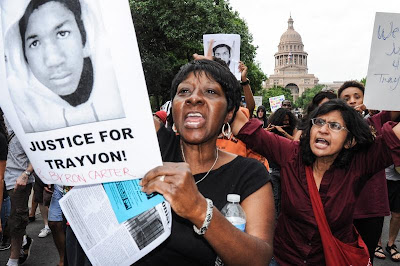 Whites watched the Saturday protest rallies in cities across the nation with the resignation that comes with having concluded that nothing they say or do is going to have any effect on this kind of political, racial, kabuki theatre. Indeed, the Zimmerman-Martin affair was deliberately turned into a political event even though local police investigating it had concluded no crime had been committed. That was the jury’s conclusion as well.


What rankles are the “Justice for Trayvon” posters and chants. Trayvon Martin got justice. George Zimmerman got justice.


What Zimmerman has not gotten is a President who should not have intruded himself before and after the trial. I don’t really care that Obama is the first black President, even though he is half-white. He should have kept himself out of the discussion. Instead his community organizer instincts and not his degree in law kicked in. Nothing he said before and after the trial was helpful and all seemed to have little purpose than to stir up the divided passions on both sides, black and white.


This nation is on a runaway train to the kind of bankruptcy that we just saw occur in Detroit. If it isn’t reversed—insane government borrowing and spending—then it won’t matter what color you are.

You always say it better... I don't know how many times my wife and I have shared the same in our discussions of the Zimmerman case. If Trayvon had not confronted George, assaulted him, and pounded him, he'd be alive today. He may have had regrets about walking away, but he'd be alive today.

Thank you, Travis. My job is often to express what others like yourself are thinking so you can know you're not alone.

and if George had stayed in his truck after calling the cops like he was advised to do, none of this would have happened.
What does, "we don't need you to do that" mean, after George told the dispatcher that he was following the kid?
It means, stay in your truck fool, we'll be there in a few minutes.

And if Trayvon had just kept on his way to the apartment there and not turned around and not punched George in the face...and that is how life is, a series, of "if's" that cannot be resolved.

This Zimmerman witch Hunt is about one thing only - the puffing up of a smoke screen to hide President Obama's treason on 9/11/12, when he allowed our patriot-heroes to be murdered by Islamic terrorists in Benghazi, Libya.

Where was Obama on the night our people were being murdered in Libya?

As usual Mr. Caruba, you are right on the money.
I'm having a real problem with the way our fearless leader handled this.
It stinks of racism on his part. I thought he was suppose to work and represent all of us, not just his black side.

They want Justice for Trayvon? Justice was served...

A jury was picked and approved by the defense and prosecution, evidence was presented, both sides made their case, the jury deliberated and a verdict was rendered... THAT is American Justice... Get over yourselves with this Justice for Trayvon BS...

I am done with Trayvon, but I will never stop going after the RACE PIMPS that perpetuate this division in America...

So now, the Liberals use this as an excuse to take my gun away. Stand your ground laws will be repealed so I can't fight or kill some young punk gaboone that is bashing my head on the pavement without going to jail. This is too much and it goes beyond Trayvon and George.

@ Ron Stabb. No, I don't think your gun will be taken away or the Stand Your Ground laws will be repealed. This is more like a summer storm that is quickly gone.

As a career police officer, it is clear to me that this trial was completely politically driven. The result was right, but never should have been tried. Shame!