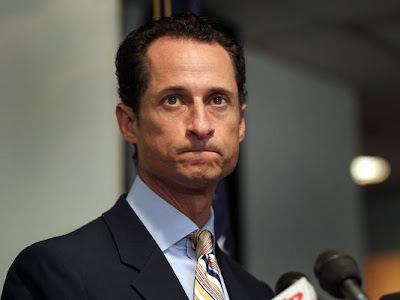 
The stars have aligned to present two of the most loathsome Democrats we have witnessed in a long time, Twitter-sex addict, Anthony Weiner who at this writing is still running for Mayor of New York and Bob Filner, Mayor of San Diego, a serial groper who gives no sign of resigning.


Democrats seem to fall prey to sex addictions and peccadillos more than Republicans.


In 2001 before leaving office Clinton pardoned Rep. Mel Reynolds, an Illinois Democrat who was convicted of 12 counts of sexual assault with a 16-year-old. He took a job with Jesse Jackson’s Rainbow/PUSH Coalition. And Rev. Jesse made news for fathering an out-of-wedlock child. Jesse Jr. is currently in jail for misuse of campaign funds.


I am not saying that only Democrat politicians get caught in such situations, but I am saying we tend to hear more about them than their Republican counterparts. Perhaps this is due to the traditional values that conservatives embrace?


A short stroll down memory lane reminds us that the late Sen. Daniel Inouye was accused of sexual harassment in the 1990s by numerous women. The Senate Ethics Committee dropped its investigation. The same committee decided not to pursue disciplinary action in 1990 when Rep. Gus Savage was accused of fondling a Peace Corps volunteer in 1989 while on a fact-finding trip to Africa.


Who can forget that former Rep. Barney Frank had a male prostitute running a service from Frank’s residence in the 1980s? Frank was openly gay and from Massachusetts where the schools these days are becoming platforms for indoctrination about homosexual and transsexual sex. Rep. Gerry Studds, also from Massachusetts, was censured for sexual relationships with an underage male page in 1983. The voters returned him to office for six more terms!


The 1970s were filled with news of Democrat office holders who couldn’t keep their pants zipped. Rep. Fred Richman was arrested in 1978 for soliciting sex from a 16-year-old. And he won reelection even though he eventually resigned in 1982 after pleading guilty to tax evasion and drug possession. The most famous Congressman from that era was Wayne Hayes from Ohio who hired a “secretary” who couldn’t even type, but who reportedly provided him with sex.


In more recent years, New Jersey’s former Governor James McGreevey resigned in 2004 after acknowledging a homosexual affair with one of his staff, but he has done an admirable job of redeeming himself through good works.


Back across the Hudson, when Anthony Weiner isn’t hogging the headlines, former Governor Elliot Spitzer is running to be New York City’s comptroller. Spitzer gained fame for patronizing prostitutes.


After a bogus campaign against Republicans, accusing them of waging “a war on women”, the Democrats sat on a bill for more than a year that would help law enforcement quickly track down violent sex offenders. It had been introduced in March of 2011 by Sen. Jeff Sessions (R-AL) as the “Finding Fugituve Sex Offenders Act to give the Marshalls Service the tools it needed to track down sex offenders. It was finally passed in November 2012.


One notable Republican let love and lust got the better of him. Former North Carolina Governor Mark Sanford fell for an Argentinian beauty. It cost him the job and his marriage, but the voters forgave him and sent him to Congress. There may be other Republican office holders who have yielded to their desires, but they appear to be far fewer than their Democrat counterparts.


For now, Weiner will provide enough fodder for the late night TV comedians and all others, but the fact is that the more you see and hear him, the more he makes your skin crawl.

My suggestion to solve the problem is to neuter the whole lot of Dem's. Not sure if it would solve the problem, but maybe slow the desire down a bit.
I would perform the surgery like we do when we fix calves during branding season, with no anesthesia, just a very sharp knife. Maybe then these wild males would learn.

I never saw anything in the guy that impressed me before the 1st set of scandals...

I say again; IF NYC is so desperately stupid that they would elect this clown, NYC deserves whatever fate that lies in store..

But then, most of these guys have no balls to begin with.

I've read about this moral degeneration of politicians before in the Roman history by Tacitus concerning the early Emperors like Caligula and Nero.

I wonder which Democrat president will be the first to appoint his horse to the Senate, declare himself to be a god and marry his sister?

The ghost of Caligula smiles...

I grew up in a world of decent human beings.

Today I live in a world of dogs.

Not only does it seem like more Democrats are guilty of such transgressions, it also seems that the members of the Democratic Party have no qualms about voting them back into office.

It is more than a little hypocritical, if you ask me. The first sign of trouble from a Republican and the Democrats declare they should resign his office, whatever that office may be. If it is a Democrat who goes off the rail, that seems to tickle their fancy and they keep voting for them.