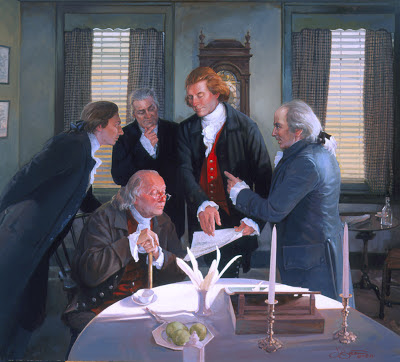 
On the Fourth of July it is traditional and proper that we pay tribute to the nation’s Founding Fathers. The names of Washington, Jefferson, Adams and Madison are well known to Americans, but far less of the names of the conservative founders who, in many ways, saved and created the nation through their efforts and sacrifices.

They include Robert Morris, Gouveneur Morris, John and Edward Routledge, James Wilson, Philip Schuyler, and John Dickerson. Their achievements have been mentioned in passing by many historians, but it took David Lefer to do them the full justice they deserve in his new book, “The Founding Conservatives: How a Group of Unsung Heroes Saved the American Revolution.”


For conservatives today, it is testimony to the tenacity, fortitude, and sacrifice these men demonstrated during the long years of the Revolution and it is also the story of the way the colonies, later states, often failed to meet their obligations to fund the soldiers who fought for freedom from England, often suffering horribly at Valley Forge and elsewhere. When the fighting ceased, they just as often found themselves without pay or pension.


From the Declaration of Independence in 1776, to the peace treaty in 1783, to the ratification of the Constitution in 1788, and the inclusion of the Bill of Rights in 1791, Lever notes that “The Revolution was a time of war without end; of real estate crashes, rampant speculation, and mounting public debt; of popular outrage at bankers and merchants who grew rich while the rest of the nation struggled; of bitter disputes over taxation; and of such animosity between left and right that it left Congress paralyzed for months on end.”


In short, times not unlike our own today.


In the years following World War II, historians of that time “made a conscious decision to downplay any hint of strife among the Founding Fathers”, but the reality can be found in Lefer’s book and it is far from what a generation or two of Americans were taught. America’s economy was based largely on agriculture, but it was the conservative Founders who were the first advocates of a banking system, corporations, and large-scale industry. It was the conservatives who set in motion the rise of America.


Today it is fashionable among liberals to depict the Founding Fathers as slave-owners and many were in an era where their labor was needed, but many of the conservatives chose to free their slaves after the nation was established.


Of the men mentioned above, all could be considered the “elite”, wealthy men who nonetheless risked their wealth and their lives in the cause of establishing a new nation and, indeed, many lost everything as they risked the investments in a wide range of land speculation and other enterprises.


At the heart of their endeavors was the 17th and 18th century concept of virtue which was very different from how we interpret it today. “It implied manliness as well as selflessness, an ability to fight for the state, and a willingness to place its interests about one’s own.” None perhaps exemplified this better than George Washington whose tenacity kept together the ill-clothed and fed army that ultimately defeated the most powerful empire of its time.


The Founding Fathers were extremely distrustful of the concentration of power as was seen in the concept of monarchy and today Americans are distrustful of a government whose powers of surveillance and thus control are seen in the revelations about the role of the National Security Agency, the Internal Revenue Service, and the Department of Homeland Security. Most particularly, Americans fear a presidency that ignores the Constitution and Congress, preferring to rule by executive orders.


By April 19, 1775, “the stench of gunpowder and dead men filled the air between Boston and Concord” and soon enough the Second Continental Congress “which met for the first time three weeks later, found itself in charge of a war it had not authorized and did not know how to run.” Their job was made easier by an arrogant George III who refused any efforts at compromise.


“By the end of the Revolution, writes Lefer “Americans were toppling old patterns of deference as relentlessly as gilded statues of King George. A new world of greater social mobility and political participation was rapidly coming into being. And while hostility to the rich continued to exist, the changes taking place in American society were far more democratic than radical. It wasn’t that the lower classes wanted to limit wealth. It was that they too now demanded the right to earn it.”


It was the belief among the conservative Founders that large-scale capitalism would be the engine that drove America to greatness. They were right.


Of those who met in private and in secrecy to draft a Constitution to replace the Articles of Confederation, “thirty-nine were lawyers and judges. Two were college presidents, and three were or had been professors. Almost half had served in the Continental Army or the militia…American conservatives were well represented at the convention.”


The threats to the new republic were not so different then as they are today and the future of the United States of America was no more in question then as now.

In the early 21st century ideas like limited constitutional government, individual rights and capitalism are as radical as they were in late 18th century.

So it is a badge of honor when 25% of American Leftists think Tea Party Patriots are terrorists.

Its Ironic that your basiclaly casitng the Loyalists, and Kign Gorge, in the riolw of modern Liberals, with a beleif in Unlimited Government, no such thing as Individual Rights, and of coruse a rejection fo Capitalism, since the Realityis the Government was smaller and had fewer restructions on eithwr individual Rights or the Marketpl;ace under the Crown Government than under the New Republic.

By the way, King Gworge was a COnstitutional Mpnarch, not an absolute one, and the idea of a Constitutionally Limited Government is a British one, not uniquely American, and Indivisual Rughts were protected in English COmmon LAw...

You thoughts are welcome, but you need to work on your spelling! :-)

I am actually Dyslexic.

Dyslexia affects me to some extent as well...And writers learn that their minds may read an error as what they are thinking, but not what they actually wrote.