What "Phony" Scandals is Obama Talking About? 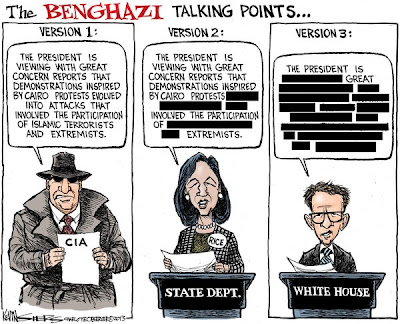 
It is absolutely astonishing that Obama could refer to “phony scandals” when the list of genuine scandals keeps growing. Despite the best efforts of the mainstream media to deflect attention from them, they have become a constant factor from Obama’s first term to his second. To dismiss them as “phony” is a display of arrogance that is breathtaking.


In May, writing about the revelations that the Justice Department (DOJ) had seized the telephone records of Associated Press reporters and editors without informing them, Wall Street Journal columnist, Peggy Noonan, observed that “A President sets a mood, a tone. He establishes an atmosphere. If he is arrogant, arrogance spreads. If he is too partisan, too disrespecting of political adversaries, that spreads too. Presidents always undo themselves and then blame it on the third guy in the last row in the sleepy agency across town.”


This DOJ’s actions are not a “phony scandal.”


Noonan was particularly prescient because, when the Internal Revenue Service scandal involving the deliberate denial of tax exempt status to conservative groups became known, the White House said it was the work of a few rogue employees in the Cincinnati office. That has since unraveled to reach right up into the office of the highest political appointee in the IRS and, in all likelihood, it reaches into the White House.


The IRS scandal is not a “phony scandal.”


Already filed and forgotten is the “Fast and Furious” scandal, the name taken from an ATF program intended to track weapons bought in the U.S. and “walked” into Mexico. In the process, the ATF lost track of hundreds of firearms, some of which were used to kill a U.S. Border agent and countless Mexican citizens. “Fast and Furious” was back in the news on July 5 when the Los Angeles Times reported that “A high-powered rifle from Fast and Furious was used to kill a Mexican police chief in the state of Jalisco earlier this year, according to internal Department of Justice records.” To stop further investigation of the program, Obama issued an executive order.


“Fast and Furious” is not a “phony scandal.”


The signature legislation of the President’s first term is Obamacare, a two-thousand-plus page law that was passed with a straight Democrat vote by Senators who had obviously not had enough time to read it. Since then, virtually all the promises made by the President have been proven to be lies. Not only have premiums risen, but its impact on employment has been catastrophic, leading companies to either not hire or to lay off workers to avoid a key element of the law. Without any legal right to do so, the employer mandate element was then delayed until 2015, after the 2014 midterm elections.  Health and Human Services Secretary Kathleen Sebelius was found to be soliciting donations from companies HHS might regulate to fund the signing up uninsured citizens.


Obamacare is not a “phony scandal.”


To the tune of billions, many of the “alternative energy” companies that received government loans went bankrupt throughout the first term, sticking the taxpayers with the losses. Similar losses accrued from the bailout of General Motors whose stockholders and bondholders were left with nothing for their investment while the auto unions and the government took a major position in the company’s ownership.


Green energy company failures are not a “phony scandal.”


A similar loss occurred in the “Pigford” scandal in which an Agriculture Department program that began as an attempt to compensate black farmers who had allegedly been discriminated against turned into a program in which billions were disbursed to thousands of additional minority and female farmers who had little or no grounds for claiming discrimination.


Pigford was not a “phony scandal.”


There are so many scandals and breaches of judgment and behavior by federal employees and management during the first and second term that there is even a website exclusively devoted to tracking them. You can visit it at http://obamascandalslist.blogspot.com.


The greatest scandal of all in the minds of many Americans is the terrorist attack on a U.S. consulate in Benghazi, Libya in which our ambassador and three members of his security team were killed on September 11, 2012. Staged on the anniversary of 9/11, the White House claimed it was “spontaneous” and the result of some video no one had seen. Ongoing House investigations have since revealed that orders were given that closed down any effort to protect and rescue those under attack. The White House has refused to say what the Commander-in-Chief did the night of the attack.


Benghazi is not a “phony scandal.”


The ultimate scandal may well be the election—twice—of a man who lacked the credentials to hold the office; a man whose birth certificate and Social Security number have been independently investigated and are alleged to be fraudulent. Virtually all other records of his life have been sealed from any inspection. A man who apparently had a lot to hide is now holding the highest office in the land.


The sheer weight of these scandals and the continuing revelations disputing the facts put forth by the White House may yet lead to Obama’s removal from office or, at the very least, see another transfer of power in the Congress to the Republican Party should it gain control of the Senate and hold onto the House in the 2014 midterm elections.


For now, the greatest phony in the U.S. government is named Barack Hussein Obama.

Barack Hussein Obama is a megalomaniac in EVERY sense of the word. He is mentally unbalanced and should be removed from office ASAP...

If only the Congress and Senate had the BALLS to do so..

In my sixty years on this earth, I cannot remember a time when Congress and this nation have been this divided. Viet-Nam is a close second.
The arrogance of this man is beyond my comprehension.

What's the big deal with Obama?

You elect a Communist to the White House and you get Communism.

Wait to the GULAG is up and running!

I didn't vote for him but I know a lot of white people that didn't vote at all.
If Obama gets impeached we're left with Slow Joe.

What I find amazing is that the questions about obama's birth certificate and social security card have been completely shut down by simply marginalizing those that bring it up as "birthers". Why is everyone afraid of being labelled a birther?

I have never seen more blatant forgeries and honest go God damn good questions about these that need to be answered, yet no one is going after this for fear of being labelled.

If we can prove obama is not born of this country and his SS number is fake, then he and all of his legislation are removed...is it not. Every bad law by obama gets rescinded if we all find out he did not have the authority to enact them.

From what I understand, obama never lived or worked in Connecticut, had no friends or family there, and was not even in the state when his SS card was issued. There may be a good excuse, but no one seems to care about what that excuse is.

And as for the birth certificate, there are just way too many questions about it that come into play and need to be looked at. I watched that video about the layers and all that, and it seemed to make sense and bring up some darn good issues. If there is a reason that negates this, why is it not sought?

Then there is the document where obama is listed as a foreign student, and the book publisher notes where it says obama was born in a foreign country.

Either way, we can't even ask the question, for fear of being labelled. It seems to be a big tactic to shut people up that oppose obama by simply calling them names...and it works.

@sdkar. I agree. It is astonishing that serious investigations that have found his birth certificate and SS number to be fakes have yielded no action.

Phony scandals would have phony results. Some of these scandals resulted in deaths. Others affected business and still others stifled political action. The elephant in the room whenever Obama charges anything to be phony is Obama himself.

It's like this - Napoleon wasn't a Frenchman, Stalin wasn't a Russian and Hitler wasn't a German.

The upside is that I don't think Obama plans to invade Russia.

I went on HuffPo today and read some comments. Boy has the mood changed on there. For as long as I can remember, the liberal progressives on there would defend Obama with everything. It was rare to see a comment from a conservative. Well, today it was the opposite. Most of the comments were against Obama, and even the liberals are starting to see that Obama is a god with clay feet. Boy was I surprised. So, Obama is in big trouble with his base. No wonder he's back in campaign mode, drumming up GOP-hate and class warfare. He needs his base back and nothing does it like pandering to them. Not sure it's going to work though, seeing as most are disgusted with him because of his lies, the NSA/IRS scandals, and this non performance in the economy. Buyers remorse comes to mind!

Lime, you're right. Obama is losing his base and it will continue as Obamacare kicks in with high premiums and other problems.

Watching Obama's speech at Knox College was a lesson of a man in trouble and he knows it.