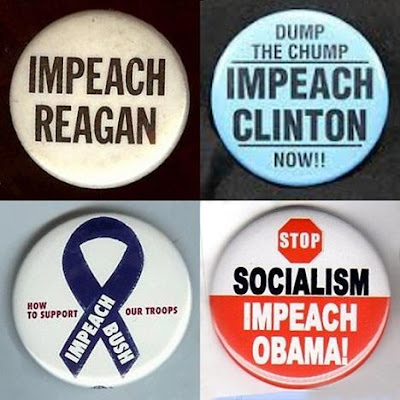 
I have been trying to remember a president that someone did not want to impeach. An effort was made to impeach Andrew Johnson but failed by one vote. Nixon resigned when he was informed that he would face impeachment for the Watergate scandal. Bill Clinton faced impeachment, but even Republicans did not want to vote for it, fearing the blowback and the prospect that Al Gore, his Vice President, would replace him.


The general feeling of anger and impotence that opponents of Obama feel will gin up renewed efforts to impeach him with some believing he has engaged in treasonous acts. It will not succeed, nor will Obama’s new insistence that all the scandals emerging from his administration are “phony.” But is it treason?


The Constitution is quite clear about treason. It is consists “only in levying war against” the United States “or in adhering to their enemies.” There is no evidence that the President has engaged in either of these activities although one can, by inference, conclude that he has by action or inaction aided the nation’s enemies.


The failure, as Commander-in-Chief, to send military assistance to the U.S. Ambassador in Libya when informed he was under attack and then concocting a false story about the reason for the attack surely raises some questions, but does it rise to the definition of treason?


Is failing to take appropriate steps to revive the economy, thereby leaving millions unemployed or underemployed a high crime? If that were the case Franklin D. Roosevelt would have been removed from office because, from his first term in 1933 until he died in office in 1945, the nation was stuck in the Great Depression that was relieved only with the advent of WWII.


Obama’s failure, now into his second term, cannot be attributed entirely to bad judgment. The steps he took in his first term added trillions to the national debt and deficit, caused the nation’s credit rating to be reduced for the first time in its history, and squandered billions on “renewable energy” loans to companies that did not produce much electricity or many jobs as one after another declared bankruptcy.


What raises my deepest suspicions, however, was his recent speech in which he elevated doing something about “climate change” at a time when the nation faces far greater, actual problems.


On June 25, an editorial in The Wall Street Journal, “The Carbonated President”, led off saying “President Obama’s climate speech on Tuesday was grandiose even for him, but its surreal nature was its particular hallmark. Some 12 million Americans still can’t find work, real wages have fallen for five years, three-fourths of Americans now live paycheck to paycheck, and the economy continues to plod along four years into a quasi-recovery. But there was the President in tony Georgetown, threatening more energy taxes and mandates that will ensure fewer jobs, still lower incomes and slower growth.”


If Obama was deliberately trying to crash the economy, he could not have found a better way to do it. It may not be treason, but it surely comes close to being a high crime. Addressing climate change at a time when, despite an increase in atmospheric carbon dioxide, the Earth has been in a cooling cycle for going on seventeen years is a thorough-going deceit. It would cost billions to absolutely no effect.


Moreover, Obama has declared a war on coal. As the editorial notes, “Coal accounted for more than half of U.S. electricity as recently as 2008 but plunged to a mere 37% in 2012. In part this tumble has been due to cheap natural gas, but now the EPA will finish the job and take coal to 0%.


It is not treason to deliberately single out the production and use of coal for destruction, but it surely is misfeasance; the improper and unlawful execution of an act that in itself is lawful and proper.


At this point I have not even mentioned the misuse of the Internal Revenue Service for political purposes, the executive order cover-up of the “Fast and Furious” program to run guns to Mexican drug cartels, the failure to investigate what occurred in Benghazi or hold anyone responsible, and other questionable actions encouraged or taken by the President.


Unless some unforeseen event should occur, we will have Obama for the next three and a half years.


I am inclined to believe, however, that Obama will continue to lose the support even of his base with the exception of some thirty percent of hardcore liberal voters.


As for those who, by the 2014 elections, will decide that change is needed, he can forget about the support of Catholics, offended by his efforts to undermine their moral objections to abortion. He can forget about evangelicals who may have stayed home during the last election due to the fact that Mitt Romney is a Mormon, but each of these faith groups and others will be reinvigorated by their opposition to gay marriage.
Those who fear his efforts to eviscerate the Second Amendment will vote for change. A lot of the unemployed may be inclined to vote for anyone who offers an alternative to their present plight.


His poll numbers are dropping and, if this continues to be a trend, he will spend the next years as the most unpopular President to have ever held the job.

It looks like President Buchanan (1857 to 1861) has real serious competition for being "The Worst President" in American history.

...Buchanan's efforts to maintain peace between the North and the South alienated both sides, and the Southern states declared their secession in the prologue to the American Civil War. Buchanan's view of record was that secession was illegal, but that going to war to stop it was also illegal. Buchanan, an attorney, was noted for his mantra, "I acknowledge no master but the law."

By the time he left office, popular opinion was against him, and the Democratic Party had split. Buchanan had once aspired to a presidency that would rank in history with that of George Washington. However, his inability to impose peace on sharply divided partisans on the brink of the Civil War has led to his consistent ranking by historians as one of the worst presidents in American history. Historians in both 2006 and 2009 voted his failure to deal with secession the worst presidential mistake ever made.

Obama trumps all competition for worst president in my view. Like all Democrats, he has shown how to make a bad situation worse.