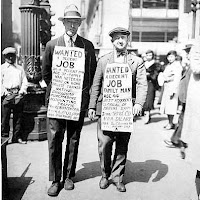 The nation’s economy is caught in a perfect storm. We are looking at an international tsunami of fear. Investors are dumping their stock holdings. Credit has hit a choke point making it difficult for banks and lending institutions to make the loans that are the ocean of trust and optimism upon which our economy floats.

When the supply of money dries up, every kind of business enterprise grinds to a stop. Meanwhile, we bystanders watch as large banking operations seek to gobble up those in trouble. We watch as the Dow deflates. A category five hurricane is about to hit and we have no where to run.

For decades we have stood by and watched the federal government grow in size and reach under both Democrats and Republicans. The “bailout” is, in effect, the nationalization of the banking and financial industry. We have acquiesced in the federalization of the nation’s educational system. We have permitted Constitutional protections be put in jeopardy by the Patriot Act.

Not only are we looking into the eye of a storm that threatens to become a worldwide depression, we have been left vulnerable to power and energy losses as the result of a relentless attack on our oil industry since the days of the Carter Administration. The result is our dependence on foreign oil. Add to that the attacks by environmental organizations on coal and nuclear energy, both of which combine to provide the bulk of the nation’s electrical power.

We have debased both our fuel and our agricultural sectors with mandates for ethanol. To the tune of millions, the government is subsidizing the least effective and most inefficient forms of energy, wind and solar power, and biofuels.

None of this has happened overnight. It has been the result of incremental bad decisions made by Congress and/or put forth by various administrations. We know now that it was pressure from the Clinton Administration that required Fannie Mae to begin purchasing sub-prime mortgages and requirements imposed on banks and lending institutions to make these loans. When the housing bubble burst, so did the illusion that housing would always continue to increase in value.

There are some extraordinary demographic shifts that only occasionally gained public interest and concern. One example has been the resistance to the flow of millions of illegal aliens into the nation. Sanctuary cities are now rife with crime.

What is generally unknown, however, is that the Caucasian population of most Western nations, including our own, has stopped breeding. Europeans are not reproducing themselves and neither are Americans. What population growth we’ve had has come from both legal and illegal aliens. And this is happening as millions of baby boomers are starting to retire. Who will support our huge entitlement programs of Social Security and Medicare if unemployment increases?

Cheap credit and cheap imported goods have fueled our economy and lifestyle, but if foreign nations begin to protect their own industries and exports, life in America is going to become unpleasant. We are seeing early signs of this occurring. Nations, for all the talk of international trade, will act in what they believe is in their own interest.

The last Great Depression in the 1930s was a combination of trade protectionism and the imposition of higher taxes at the very time the nation needed to be able to export more of its goods and allow more money to remain in people’s pockets. If money becomes scarce prices will fall, but unemployment will rise in a cascade of business failures.

For Americans, it did not end until well after World War II. That war literally saved the American economy which had been stagnant for a decade. It also killed millions of people around the world. Since our national infrastructure was intact, Americans not only had jobs in the converted war industries, it was also positioned to begin an unprecedented spate of economic growth.

If history is any guide, a thoroughly corrupt and criminally partisan, i.e. divided, U.S. Congress, having thrown $700 billion of taxpayer’s money at the current crisis will find lots of other people to blame for the crisis they put in motion.

We are on the cusp of electing the product of pure public relations, Sen. Barack Obama, a man whose greatest influences in his life have been Muslims and Marxists. A product of the Chicago political machine and a man who gives every indication of having a messiah complex, Barack Obama is the worst possible choice to lead a nation at risk. If that happens, the liberties the Constitution guarantees can be gone in an instant.

It happened in 1930s Germany and Italy. An imperialist Japanese Empire was already gobbling up China and the rest of Asia. Substitute a hundred million Muslims eager for a new caliphate, armed with nuclear weapons, and you have global turmoil that will make the last century look tame.
Posted by Alan Caruba at 1:57 PM

Thoughtful and "spot on", Alan!

Yes, it does seem that way, but I am holding out hope we can dodge that bullet.