New Fears of the Red Menace 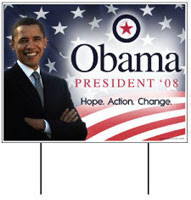 What I am hearing among my friends and colleagues, and what I am reading as we close in on Election Day is fear of the red menace.

While vast numbers of Americans, out of ignorance or indifference, choose to ignore Barack Obama’s long family and developmental history of associations with hard-core Marxists, those that have taken notice believe that, once elected, he will not let loose the reins of power and the change he promises will mark the end of the American republic.

One friend and fellow blogger put it this way: “Our fellow Americans, (on the left side of the American political spectrum) have mistakenly read the Right’s current state of mind as “fear of losing the election.” They could not be more wrong. It is not fear of losing the election. It is, however, fear of losing our country and the growing resignation that It is already too late to stop the sprint toward an inevitable conflict between citizens of what used to be the greatest country on the planet.”

Equally outspoken has been Sher Zieve, a popular commentator whose work appears on a number of conservative websites. In a recent piece, she asked, “Is the USA ready for an American Stalin?”

Most conservatives know by now that Obama was “a red diaper baby” raised by a mother with Marxist sympathies and, after she left him with her parents, they continued his education by having a Communist Party U.S.A. representative in Hawaii, Frank Marshall Davis, serve as a mentor. He started his political career in the living room of former Weather Underground terrorists, William Ayers and Bernadine Dohrn.

Standing out from this group was Saul Alinsky, a Marxist who wrote a seminal book on how to use “community organizing” as a guise to introduce communism “by lulling the middle class into a false sense of comfort with the organizer’s ideas.”

Zieve predicts that “You will not be able to vote him out of office.”

I have lived more than seven decades at this point and I do not recall such a palpable sense of fear in the conversations I have had of late.

Some fear the end of Second Amendment protection of their right to own guns. Some 80 million Americans own guns and it is doubtful many will voluntarily give them up. We could see militias spring up on this issue alone.

Others fear the complete restructuring of the U.S. economy because of Obama’s constant criticism of corporations, CEOs, Wall Street, and the need to tax the “rich”, and to change other key elements of our capitalist economy. A major restructuring is likely what he has in mind when he talks about change. With a Democrat controlled Congress, he can make it happen.

Most Americans, particularly of a younger generation that grew up reading textbooks that made little or no mention of the millions who died under Stalin’s Soviet regime in the 1930s or after Mao Zedong’s Chinese communist regime seized power following World War II. Confiscation of wealth, deportations, famines, and the outright execution of anyone deemed “an enemy of the people” characterize communist takeovers. Fidel Castro did it on a smaller scale when he seized power in Cuba in the late 1950s.

One wants to think such fears of unjustified, but a look at campaign posters for Obama reveal a red star over the words, “Obama. President ‘08.” For my generation, a red star means only one thing, communism.

So, maybe we have a reason to fear a President Obama. We only have a few days left to make sure that does not happen. After that, all bets are off.
Posted by Alan Caruba at 6:50 PM

Dead on the money, Alan!

Interestingly, a couple years ago one of my children came home from school with the impression that communism worked well under Mao Tse-tung.
As I explained what communism really entailed and how millions have suffered and died under that system.
That part was touched on on the third day of instruction. My child told me that the first two days left her feeling that communism was good and the negative aspects were minimized. This instruction was at the junior high level!

I was left to wonder just what other children were left with after those three days of instruction.

It was not long after that when I explained what Obama stood for, the response from my child.
"Oh my God! He's a communist!"