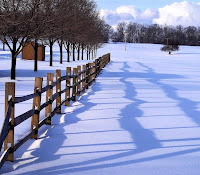 Some folks in my home state of New Jersey woke up to a blanket of snow the same week as Halloween. The state’s largest daily headlined the story as “October Surprise: Snowfall snarls traffic and cuts power to 62,000 homes.” In a swath of northern counties, snow fell as if it were mid-winter. Fourteen inches of snow fell at High Point State Park.

Snow in October is, indeed, a surprise to most, but not to those of us who, for years now, have been both debunking the “global warming” hoax and warning about a coming ice age. It may be one of short duration as in the case of the Little Ice Age that gripped the northern hemisphere from around 1300 to 1850 or it could be another like previous, major ice ages that alter history.

If you visit http://www.iceagenow.com/2008_Other_Parts_of_the_World.htm you can read about scores of weather events occurring right now that attest to the way the entire world has gotten much colder of late. Meteorologists track the latest cooling cycle to 1998, making it a decade old at this point with no end in sight for decades to come or longer.

From Austria to Australia, in places like Costa Rica and New Zealand, all around the world the Earth is getting cold and snow is occurring. To ignore this is pure folly.

To continue passing legislation to reduce the emission of carbon dioxide (CO2) or other “greenhouse gases” isn’t just stupid, it is lethal. What people are going to need more of is the energy to heat their homes and workplaces. Thwarting the building of more coal-fired or nuclear plants to generate electricity is suicidal.

That is, however, exactly what Congress intends to do and we can anticipate blizzard of legislation, instituting “cap-and-trade” requirements, increases in ethanol requirements, and a host of other poisonous legislation that will severely handicap any recovery from the current financial crisis and inflict a host of allegedly “unintended” consequences.

One of those consequences were the food riots that occurred earlier this year around the world when the price of corn rose in response to U.S. mandates that ethanol be used along with gasoline. Proposed increases in such ethanol use will require engineering changes in new automobiles and likely damage to current models. It is highly corrosive, to the point where it cannot be transported by pipeline, but only by truck. The public is never told that ethanol increases the cost of each gallon of gasoline while at the same time reducing the mileage it gets.

Both candidates for the presidency profess to believe in global warming. Both are wrong. Both need to visit northern New Jersey or any one of a swath of northeastern states that could well be under a blanket of snow on Election Day.

A lot of scary ghosts, goblins, and other creatures will go trick or treating on Halloween, but future Halloweens will likely be scary for the early arrival of winter conditions similar to those experienced this week.
Posted by Alan Caruba at 12:03 PM

Great to read that there are some people with some sense. Keep up the good work!

Thank you, Karl. All I do is look at the actual science, the actual data. After that, it's easy.

It's never easy. When it comes down to it...it's all effort.