At the Core of Election Corruption 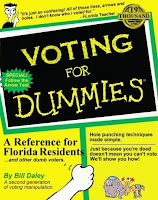 A lot of people who know politics far better than I are beginning to openly worry if John McCain can close the gap with Barack Obama. At a time when voter registration investigations and scandals are erupting in more than a dozen states, McCain insists on calling Obama “a decent man”, but his record suggests otherwise.

At the heart of the voter registration abuses is an organization called ACORN, an acronym for Association of Community Organizations for Reform Now, and Obama has a long history with it.

ACORN is officially a taxpayer-supported “non-partisan” organization. The truth, however, is that ACORN has an anti-free market, radical socialist agenda.

1992 - Barack Obama was director of “Project Vote” which coordinated with ACORN.

1993 - 02 Barack Obama was on board of directors of Woods Fund which gave hundreds of thousands of dollars to ACORN.

1995 - Barack Obama was attorney for ACORN in a “motor-voter” case.

1995 – 99 - Barack Obama was chairman of the board for former Weather Underground, domestic terrorist, William Ayer’s Chicago Annenberg Challenge which gave millions of dollars to ACORN.

2000 – 02 - Barack Obama was on board of directors of William Ayer’s Chicago Annenberg Challenge funneling money to ACORN.

The Chicago political machine is virtually the template for political corruption and Obama has been a part of it now for decades. The fact that this raises no doubts or questions in the minds of his supporters is a serious cause for concern for the rest of us.

It well may be that the financial crisis gripping the nation may so distract voters that the wish for “change” will be sufficient for them to ignore some very ugly truths about Obama. If that proves true, the real losers won’t just be John McCain and the Republican Party. It will be the American people.
Posted by Alan Caruba at 1:54 PM

Allowing Obama to deny his deep involvement with basically a "ballot stuffing paid machine of the hard left" organized as the nonprofit ACORN is just the latest in a series of journalistic derelictions.
I too have written about this fraud, I believe it may lead to the total loss of our freedom and liberty as Americans.
http://libertyforus.blogspot.com/

I second that comment. The MSM has abandoned all pretext of objectivity in favor of outright cheerleading for the Obamessiah. 95% of the media are shills for democrats and they don't even pretend to be even-handed. Ex.-Why don't they string up Mahoney they way they did Foley? Because they are determined to deliver the presidency to Obama and nothing will be allowed to rock the boat. At this point, Obama would have to get caught raping a male child for the press to report anything, anything negative about him.

Former Louisiana Governor, Edwin Edwards, once quipped that he'd have to be found in bed with a dead girl or a live boy to lose the election.

So, yes, the Mahoney mess will be swept under the carpet by the Democrats and the MSM.