When You and Everyone Else You Know Are Crazy 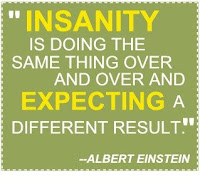 We are now entering the final two full weeks of the campaigns and, if you feel like you and everyone else you know is crazy, you’re right.

Elections bring out the worst in everyone because, without close friends and family with whom we can share our real feelings, we are required to be very polite and tolerant of the views of everyone who is voting for the other guy who is not your choice.

To make matters worse, if you are passionately devoted to one candidate, getting through the final two weeks requires that you mute all of the other candidate’s commercials, stop listening to the news on television, and read only the sports section of the daily newspaper.

By the way, both candidates think you’re a moron.

This election will be further exacerbated by (1) the vast contempt voters have for Congress in general and George W. Bush in particular; (2) the vague feeling that either candidate is unqualified for the job based on their positions on the issues; and (3) the sure feeling that the nation is in a Recession that is going to get worse.

You’d have to be nuts not to be nuts by the time Election Day arrives.

Many voters have been nuts for a very long time. They include people (1) who think the Earth is warming even though it has been in a cooling cycle for a decade; (2) those who think that electricity that is generated by coal or nuclear power is a bad thing even though those two sources currently produce over 70% of all electricity; and (3) those who think a Black President will convince the rest of the world that America is not as racist as every other nation.

Invariably, all families have people who will vote for the other candidate. This ruins the Thanksgiving Day dinner every election year.

The point being that elections are a period of mass psychosis in which candidates make appeals to the reason that has long since deserted us after months of listening to the candidates, their surrogates, and the pundits telling us what the polls mean and which states are in play.

Since the craziness affects Democrats and Republicans equally, the few people who dislike both parties and their candidates are left to decide who wins for the rest of us.