No Joy in Mudville 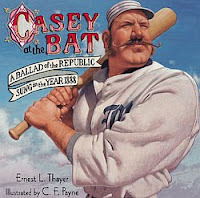 As in the case of Mighty Casey at the Bat, unless John McCain comes out swinging for the remaining two debates, there will be no joy in Mudville after Election Day.

I cannot recall when I have seen Republicans so dispirited by events and by their candidate. Forget about the entertainment value that Sarah Palin brings to the ticket, nobody votes for vice presidents. The primaries seem so long ago that it’s hard to recall how he managed to get the nomination. Republicans were asked to choose from a relatively uninspiring group.

They worried over Mitt Romney’s Mormon religion, former Arkansas Governor Mike Huckabee, an unabashed evangelical, and virtually ignored former New York Mayor Rudy Guiliani, Rep. Duncan Hunter, and the somnambulant former Senator-turned-actor. Fred Thompson, and finally a guy that just sounded a bit loony, Rep. Ron Paul. Paul has turned out to be more right on most of the issues of our time than the others.

That left Sen. John McCain, a genuine war hero with a long history as a “maverick” Republican. This turned out to mean he preferred political compromise to confrontation. Everyone agrees he is a decent, good man, even if he is a decent, good, old man by today’s standards. Age didn’t hurt Ronald Reagan’s candidacy, but John McCain is no Ronald Reagan.

When you add in the financial crisis—one that came along at a time that was very convenient to the Democrat Party—it almost doesn’t matter that their candidate, Sen. Barack Obama, remains a virtual enigma to everyone. He has a simple message of hope and change that appeals to the simple-minded, neglectful of the fact that we live in a very complex world.

There is only one thing that could change the drift that seems to be lifting Sen. Obama’s campaign and that would be another terrorist attack on the homeland. I don’t think Osama bin Laden is that stupid. I think he thinks he’s got his dream candidate at the top of the Democrat ticket.

The Republicans had pretty much owned Congress and the White House from the days of the Civil War until the days of the Depression. After that, the Democrats owned them with time-out for Eisenhower, a Republican war hero, and, following the debacle of LBJ, Nixon. Then following the debacle of Nixon, they gave us Jimmy Carter. Then it was back to the GOP until “Bubba” came along to turn the Oval Office into a bordello.

In bad financial times, voters turn to the Democrats even if, as is the present case, they are the cause of the bad times. The fact that Sen. McCain wants to keep this as much a secret as does House Speaker Pelosi, is one of those great mysteries.

There are four weeks left to the campaign. Republicans are looking for a good fight. They are not likely to get one from their party or their candidate.
Posted by Alan Caruba at 1:14 PM