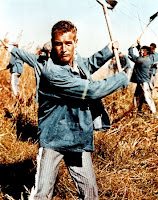 In one of the movies that made the late Paul Newman famous, “Cool Hand Luke”, one of the characters, a prison warden, utters the line, “What we have here is a failure to communicate.” His point being that he is in charge, not the prisoners.

The various members of the U.S. government, our elected legislators and the President, have failed to communicate—some have said misled—Americans regarding the reasons we are trying to cope with a financial crisis based largely on an issue of trust. We do not trust our government and we do not trust our banking and investment community, and they don't appear to trust each other.

It is at times like this that conspiracy theories and rumors abound.

Take, for example, one put forth by Wayne Madsen, a former naval officer who was assigned to the National Security Agency as well as being a former executive at a Fortune 500 company. Wayne now fashions himself a citizen journalist at WayneMadsenReport.com. That pretty much constitutes all that I know about Madsen other than he does some radio with something called the Republic Broadcasting Network.

On October 9, Madsen reported that he had learned from “knowledgeable Federal Emergency Management Agency (FEMA) sources that the Bush administration is putting the final touches on a plan that would see martial law declared in the United States with various scenarios anticipated as triggers.”

Were that the case, President Bush would become the nation’s warden. The triggers, according to Madsen, would include “massive social unrest, bank closures resulting in violence against financial institutions, and another fraudulent presidential election that would result in rioting in major cities and campuses around the country.”

At this point, let it be said that talk of rioting and martial law always circulates in times like these. It’s worth taking careful note of who is doing the talking.

There have been times when rioting occurred, but it has usually involved racial discord. One has to reach back to the days of the Hoover administration for protests regarding the economy, but in that case it was a government riot in which WWI veterans who had descended on Washington, D.C., to demand promised payments for their service were forced from their improvised “Hooverville” shacks by the U.S. Army.

Speculation that the present government and whichever one takes over in January would be dusting off plans in the event of such discord is predictable as well. It is not unlikely that the geniuses who created this financial mess, Congress in particular, are looking at contingency plans in the event the U.S. was to default on its loans and other debts. The fact that the current crisis is international in scope would portend military conflicts if not brought under control.

It is extremely doubtful events would come to that.

All one needs to do is recall the calm with which Americans waited out the Florida vote count and the result of the Bush-Gore election. No riots. Just a giant collective shrug.

What is happening is likely some kind of restructuring of how the international financial system operates in a new age in which a depositor can transfer funds with the click of a computer key. This new crisis is based on very old human error; spending too much, promising too much, pretending a problem does not exist until it can no longer be ignored.

The government has to ramp up its communication skills and programs to reassure Americans and others that, indeed, a rescue plan is in place and will begin to function soon. That’s really what people want to hear.

If John McCain continues to “name names”, i.e., Barney Frank, Chris Dodd, Nancy Pelosi, et cetera, he might just get elected. He was once famous for “straight talk” and Americans are hungry to hear more of it.
Posted by Alan Caruba at 2:44 PM