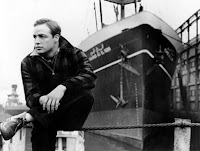 It’s one of those things that only someone who has devoted their life to writing would understand and it is inherently unfair. Budd Schulberg was a great writer and, though the word is widely used, a genius.

Genius leaves its mark on the world and Schulberg’s novels and, in particular, his screenplays did that. While it is true that great actors breathed life into the characters he created and the words he gave them, it is also true that he had created them out of the extraordinary talent he possessed.

If Brando, as Terry Malloy in On the Waterfront would make “I could have been a contender” immortal, the words first flowed from Schulberg’s pen, as did Malloy and the host of other characters he created in that alchemy of taking real people and transforming them into larger than life representatives of mankind.

Raised in Hollywood as the son of B.P. Schulberg, the chief of production at Paramount Studios, his mother, Adeline Jaffe, was a respected literary agent. Schulberg lived in a veritable hothouse of creativity.

Someone else might have returned to civilian life and written pulp fiction about the war, about tough detectives and beautiful blondes, but in 1941 Schulberg made his debut with a novel, What Makes Sammy Run? Sammy was a backstabbing, ruthless climber who became a Hollywood boss out of sheer ambition. It was a sensation.

In 1934, Schulberg had gone to the Soviet Union and when he returned home had joined the Communist Party. In the depths of the Depression, many others had done the same, thinking that communism was a superior system to capitalism, but either not seeing or just denying its totalitarian basis for existence. It was never about the common man, but about concentrating power in the hands of the few.

Schulberg, however, was always drawn to the common man as the center of the universes he created in films like On the Waterfront in which he revealed the mob’s control of the longshoreman’s union and followed that with The Harder They Fall about the mob’s involvement with professional boxing.

In both cases, the films had a real life impact, encouraging law enforcement to clean up both situations. Then he wrote A Face in the Crowd about how a country boy starts out in radio, moves on to television, and becomes a demagogue on the basis of his popular personality, a mask he hid behind.

That one man could have written just one of these now classic films would have been an achievement, but that one man wrote all three, plus powerful novels and everything else to which he turned his hand is astonishing.

He was still at work at age 95 on Wednesday, August 5, when he passed away. That's what writers do. They write up to the minute they die. Few, however, leave a legacy of work that changed their society while providing great and enduring moments of drama.

I suspect that Schulberg’s work will be even more respected and renowned now that he has died. He had to fight for respect all through his life because his integrity would not let him turn a blind eye to the wrongs he saw around him.

Or maybe his work will live on and he will be forgotten? That could happen, too. In the end, it is the work. He made it look easy. That’s what genius does.
Posted by Alan Caruba at 5:26 PM

Just a quick correction, A Face in the Crowd starred Andy Griffith, not Arthur Godfrey.

I have deleted the reference to Arthur Godfrey because you have reminded me that a generation or two of Americans have no idea who he was.

And, yes, Andy Griffith played the "Godfrey" character in the film, but the character was presumably based on the real life radio-tv personality.