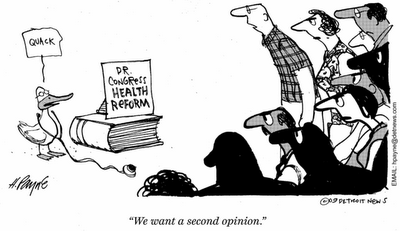 From http://www.theospark.net/ with a hat tip to Shelly and Peter Dunn:
Obama's health care plan will be written by a committee whose chairman says he doesn't understand it, passed by a Congress that hasn't read it and whose members will be exempt from it, signed by a president who is a closet smoker, funded by a treasury chief who did not pay his taxes, overseen by a surgeon general who is obese, and financed by a country that is nearly broke. Great role models.

What could possibly go wrong?
Posted by Alan Caruba at 8:41 AM