Lots of Taxes, Lots of Spending 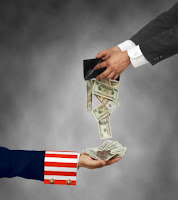 We sometimes forget that the primary reason we live in the United States of America and not some British Commonwealth nation is that the people who fought our Revolution got fed up with all the taxes that King George and Parliament kept imposing on them. No taxation without representation was the rallying cry.

Now all we seem to have, whether at the federal, state or local level is endless taxation on virtually everything we purchase, use or own. In many cases those taxes have risen obscenely in recent days.

The new tax on tobacco products is, we’re told, intended for our own good, making them so expensive we will give up smoking. Other proposed taxes on “fast food” and even soda are passed off as being an incentive to eat in a more healthy fashion. Our personal health is our business, not the government’s and surely not an excuse to tax us!

There have always been “sin” taxes on things like tobacco and alcoholic beverages, but thanks to the profligate spending of all legislatures everywhere, these taxes are rising to obscene levels, unrelated to anything than a desperate effort to fill gaps in the budget.

Neither the states, nor the federal government seem to understand the need to STOP SPENDING. Every new “entitlement” program, like the proposed healthcare “reform” just imposes more and more taxation, and creates larger debt.

Here’s a list of just some of the taxes we pay:

In my home state of New Jersey, the tax per gallon of wine and spirits increased 25% this month. That’s about $5.50 for liquor and 87.5 cents per gallon of wine. New Jerseyeans are famous for being among the most taxed citizens in the nation. No wonder some of us drink! We have exorbitantly high property taxes, along with income and sales taxes. Born and bred here, I remain mostly out of inertia and old age.

Now, in President Obama’s words, “we’re broke” and the answer he and Congress propose is to raise taxes while increasing the national debt by trillions so that your children’s children will be born having to pay it off.

The history of the Great Depression and sheer common sense argue against this.

At the same time, the federal government is taking ownership of a large piece of the automotive industry, owns a majority interest in a huge insurance company and is owed billions in TARP money by banks, investment houses, and AIG.

The Democrats want to take over healthcare in America.

The Democrats want to put a tax on all energy use.

The Democrats are even proposing to set how much executives can be paid.

There is a word for this. It’s communism.

There has long been talk of “a flat tax” and a “value-added tax.” The former is advocated by Steve Forbes and, if he’s for it, it is probably a good idea. The latter is favored by European nations and is a form of sales tax.

The great problem with all taxes is that, once imposed, they are rarely, if ever, repealed. The profligate spending by state and federal legislatures is the problem.

What is wrong with this picture? EVERYTHING!
Posted by Alan Caruba at 10:52 AM

Alan, we need a "Cash For Congressional Clunkers" program--and quick! I'll trade in BOTH my New York Senators AND my Representative for--for...NOTHING!!! You can have all three. No charge!

Thanks for employing the C-word lately, Alan. I'm sick and tired of these politically-evasive terms that the COMMUNIST left employs to deflect attention from its real motives. These monsters are not "liberal," or "progressives." Hell, they're not even "socialists." They are out and out COMMUNISTS, and I, for one, refuse to call them anything "nicer" anymore.

Obama is a Communist.

Pelosi is a Communist.

Reid is a Communist.

Barney Frank is a limp-wristed Communist.

These people want to kill me and mine with their damned government takeover. No more Mr. Nice Guy. They are the ones who have declared war, so they'll get an in-kind response from me!

I miss the good old days when you could call a Commie, a Commie!

We just had a special election here in Columbus, Ohio. Apparently, the City of Columbus couldn't figure out ANY way to balance their budget, and had to ask the taxpayers for another half of a percent income tax. This is despite the fact that their revenue has been constantly increasing ever since I've lived here. Columbus is one of the few cities in the US that has enjoyed steady growth over the years, with few, if any, bumps in the road. But as is the case with our Federal government, they just can't seem to restrain themselves from blowing more than they take in, and this downturn in the economy caused them to bottom out hard. Of course, the first thing they threatened to cut was Police and Fire protection, unless we approved more money. They blew almost a MILLION dollars of our tax money on this special election, when we just had a regular election a few months back, and have another regular election coming up in November. They also blew hundreds of thousands of our tax dollars on ADVERTISING, spewing their threats all over television and radio for weeks prior to the election. I could go off on a tirade about that, but that's not my point this time. My point is that throughout the weeks leading up to the election, I heard countless people say things like "I don't mind paying more taxes if it will make our city safer" and "people in other cities pay a lot more than we do, so I don't mind paying more". Needless to say, the levy passed. I feel so overwhelmed. I simply can't believe there are so many people who cannot see where we are going with this. Until we can get through to the minds of these people, we're sunk. How can so many people be so conditioned to just keep paying and paying, more and more? They don't even seem to mind being threatened. It's flat out extortion, and they apparently don't even recognize it for what it is. It's sad ...

I wish you had not shown that list of taxes! Our resident Commies-in Charge in the UK have not thought of some of them, yet.