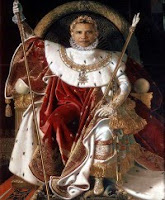 All during the long campaign leading to his election and inauguration, the media kept telling us what a genius Barack Obama was. He was a lecturer on the Constitution at the University of Chicago. He was in the Illinois State legislature. He had graduated from Harvard Law School and, before that, Columbia University. Curiously, throughout all that time, few of his fellow students or faculty had any recall of him.

No records from those days exist or are available. He was (and is) a cipher.

When you’re the President of the United States, however, everything you say and do is under close examination. Obama must like that part of the job because he has held five prime time press conferences in the first six months, about the same amount as his predecessor held in eight years.

Unfortunately for Obama, the number of people tuning in became less and less with each press conference. The last one blew up in his face as he made an offhand remark about the arrest of a friend of his. At a recent town hall meeting to promote his healthcare “reform” plan, he compared it to the U.S. Postal Service, thus inadvertently telling the truth for a change.

None of these suggests a finely tuned sense of political reality and, in particular, the introduction of two pieces of legislation, Cap-and-Trade and Healthcare “reform”, that just about everyone hates except some brain-dead Democrats in Congress, now seem a very bad idea and very bad timing.

What many are concluding is that Obama wants to utterly transform the United States of American into a totally socialist state similar to Great Britain and other nations that have chosen that route. What appears to be a lack of attention to political reality is actually a single-minded determination to ignore what Americans want and to use the tools of community organizing, intimidation, coercion, and, most importantly, deception to achieve his goals.

Cap-and-Trade bill will drive up the cost of electricity for everyone at precisely the time when Americans want to save money during a recession. He topped that with a push to pass a bill for universal health insurance, but everyone knows that Medicare and Medicaid are running out of money and the bill has countless unsavory elements that run counter to the American credo of a free market economy, competition, choice, and privacy.

Members of Congress who are now meeting with the constituents they prefer to ignore are discovering that a vast majority of them want nothing to do with either bill. A lot of them will find it prudent to not even be photographed with Obama.

Some “Blue Dog” Democrats are fearful for the party and, in particular, the 2010 midterm elections. The natives are restless.

I’m betting that a million of those constituents will show up in Washington on September 12 when a tax protest march is scheduled. At that point, even the mainstream media will be unable to pretend, as they did with the July 4th tea parties, that the public isn’t aroused and angry. For information about the event, visit http://www.freedomworks.org/.

There’s a reason Obama’s performance approval ratings are heading south in the polls. He’s displaying all the attributes of a bully or an infant who needs a diaper change. Americans of all political persuasions are uniting in their opposition.

Add to that, the resentment people are feeling as he continues to blame Bush and everyone else for the problems he keeps reminding us he “inherited.” Ronald Reagan inherited Jimmy Carter’s recession. August 13th marks the day in 1981 when he signed the largest tax cut in U.S. history. It took two years to dig out of that one. I don’t recall his ever saying an unkind word about Carter, at least in public.

Neither Obama nor the people with whom he has surrounded himself want the robust economy that made this nation a superpower. They think wealth should be “redistributed.” It IS distributed, but to those who WORKED for it, paid into the Social Security system, invested wisely, and, yes, those who inherited it from others who worked hard.

He is a demagogue. Americans are uniting to defeat his goals.
Posted by Alan Caruba at 11:14 AM

If Obama is so damned smart, then how come he insists on sequestering ALL of his school records? He makes W look smart in comparison. I say the guy's as dumb as a box of rocks.

And these artificial "crisis" moments that politicians — of both parties — gin up. My relationship with my healthcare insurer was perfect until Nov. 5, 2008. Suddenly, it was "broken" and a state of emergency existed. Why? Because they say so?

How dare you question the wisdom of our Young Oracle, Alan. Are you prepared for a visit from our friendly goons at the SEIU for some re-education?

Dem' a gogue' !! Funny, Alan. Didn't get it at first. Where's that pacifier?
Doug
Alan is hopeless and an unlikely candidate for SEIU.
I think they would classify him and some of the rest of us for the clause in the Obama health care
provision under the term 'euthanasia'.

The "Dem" in demagogue was not intended as a pun, but did turn out that way.