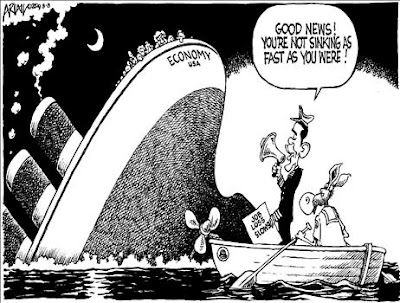 If you had purchased a stock in January of this year that had lost as much of its value as Barack Obama, you would be desperate to sell it by now. The problem is, the only buyers would be the mainstream media and their stock has been falling too.

I cannot think of a single President in our 233 year history that was so disliked by so many Americans in so short a time. His polling numbers drop daily and he is poised to make history by losing the confidence and support vital to the ability to lead, let alone to administer the federal government.

It is his judgment that is the issue and, concurrent with that, his actions. If anyone would have predicted that he would impose so much debt on the nation in so short a time they would have been called mad. Barely seven months into his administration the estimated national deficit will be reset at nine trillion dollars between now and 2019.

The federal government now owns General Motors after advancing $60 billion to avoid bankruptcy and then standing by as it went into bankruptcy. We own a huge insurance company, AIG. The recent “Cash for Clunkers” program swiftly ran out of cash and may end up bankrupting participating auto dealers. It has already severely impacted the sale of used cars, a major part of the auto market.

Under Obama, an ever-increasing shadow government of “czars” has been established; people who are presumably not encumbered by the laws that govern appointed Cabinet secretaries. Most have not been vetted, nor approved by Congress and too many have unsavory backgrounds and beliefs.

The current attempt to take over one-sixth of the nation’s economy by socializing the healthcare system is being resisted by millions of Americans, some of whom are showing up at town hall meetings and creating “tea parties” to air their grievances. As many as a million will likely fill the streets of Washington to protest on September 12.

With the exception of liberalism’s “true believers”, some 28 percent of whom will always think Obama is doing a great job, people are wondering if there is some way to remove him from holding the office for the remainder of his term, doing even more damage.

Can a President resign? Yes, Richard Nixon did; the first in the history of the nation, undone by his own paranoia and over-zealous White House henchmen. That scenario is beginning to loom large in the minds of Americans when they give thought to those “czars” and White House chief of staff Rahm Emanuel, the man who never wants to “waste” a crisis.

Americans want to clean house. Congressmen returning from a stormy recess are going to assess the value of supporting the President, the Senate Majority Leader, or the Speaker of the House. The Democrats have near total political power in Congress, but there is a limit to party loyalty and it’s called getting re-elected.

America has demonstrated the ability to right itself after making bad decisions such as Prohibition and previous poor leadership. It is being put to the test again by Barack Obama.

Well, on the surface of it, the resignation of '0' might seem a good thing though it's not likely to happen. Be careful what you wish for however, as we have waiting in the wings.......the Joe Biden Show. We are, obviously, at the point of diminishing returns as the successor to Biden would be Pelosi. If somehow the so-called health care deform bill and the cap and tax bill can be defeated then '0' would essentially be a cipher and hopefully the associated stigma would get some Democrats removed in 2010. Lots of 'what ifs' and 'let's hope' in there, but the American people have always been hopeful. Oremus.

And now Holder appointing a prosecutor to investigate the CIA - and the disclosure of the CIA Report? All with the knowledge and support of this president. Is he intentionally ruining this country or is it the normal consequence of his ultra-leftist views and policies that he has picked up during his protected and insulated academic/political life?

He has a lot of time left to do a lot of damage.

I'm thinking that Biden would be something along the lines of Gerald Ford when he replaced Nixon.

Alan, it really is time for him to resign, but his ego is far to enormous for him to ever do something good other than for himself.

I have agreed with you and others about this President being on a commited course to dismantle America. He literally hates this nation. You can hear it in every speech he gives and see it manifested in everything he does!

The hatred he has for our country is being returned to him. The old saying "what goes around comes around" applies to this president. More than likely he will leave office with the worst approval rating in our country's history.

If he continues on his socialist rampage regardless of public anger, I would not be surprised if the American people take more agressive action than protest rallies.

This post was and is more rhetorical than realistic. I have no expectation that Obama will resign, but given the mood of the nation, he should.

Alan...great post!!!
I have to agree with you about 'the obamanation' not resigning. His ego is so big that that wouldn't happen. He reminds me of the movie 'Titanic' where Jack Dawson played by Leonardo DiCaprio went to the bow of the boat and declared "I'm the king of the world! " We all know what happened with the 'Titanic' and Jack.
I know it's a common belief that the 'Obamanation' is purposely trying to destroy the economy and thus the power of the US. I try to give this man the benefit of the doubt and say that he is listening to these 'reprobate' minds for his decisions. But, if he is purposely trying to destroy us through our economy whether he is a socialist or commie. Then the Constitution clearly states this.

Article II
Section 4. The President, Vice President and all civil officers of the United States, shall be removed from office on impeachment for, and conviction of, treason, bribery, or other high crimes and misdemeanors.
What counts as a high crime? Could the collapse of the American economy be a high crime?
And where does it ever talk about czars in the constitution? This is a form of dictatorship.
Certainly, this man does not like the Constitution (isn't he a supposed Constitution professor?).
Only a fool would destroy his own house.

Jesse, you raise some interesting points. The deliberate destruction of the economy would seem a high crime to me.

But how does one prove it is "deliberate" as opposed to just stupid?

Mr. Obama has chosen to not uphold the constitutional law by proving his citizenship status beyond a shadow of a doubt. By doing so he is acting illegally and should be physically removed from office or arrested. There is no impeachment for an illegal non-American and he should be treated as such. A new Presidential election should be held since Obama's election is entirely null and void along with any appointee's and public policy he put in place during his fake Presidency.

This Country needs to get on board with this or we can all kiss our freedom goodbye.