When One Picture is Worth a Thousand Words 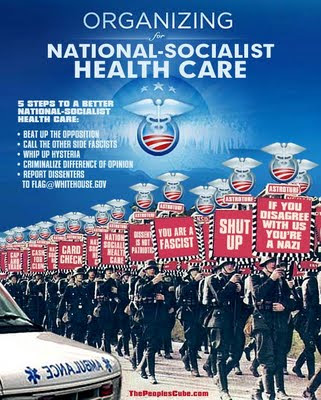 In 1930's Germany, the new socialist government of Adolf Hitler (NAZI National Socialist Workers' Party) began indoctrinating children in the quasi-military organization, the Hitler Youth, to inform on their parents should they overhear discussions subversive to the policies of the Leader. As the noose was tightened, local COMMUNITY ORGANIZERS were appointed to watch their neighbors and were told to report subversive comments to the bureaucrats above them. Neighbors informed on neighbors, some for reasons of patriotism or loyalty, some from fear. A modern inquisition ensued; a terror to free thought and expression. Increasingly harsh penalties were meted out to those who dared to dissent.

Now on the White House website comes an eerily similar request for citizens to inform on their neighbors. It states;

"There is a lot of disinformation about health insurance reform out there, spanning from control of personal finances to the end of life care. These rumors often travel just below the surface via chain emails or through casual conversation. Since we can't keep track of all of them here at the White House, we're asking for your help. If you get an email or see something on the web about health insurance reform that seems fishy, send it to flag@whitehouse.gov."

It is apparent that the current administration is either unaware (not likely) or disdainful of the law of the land.

"According to 5 U.S.C. § 552a, United States agencies, including the Executive Office of the President, shall 'maintain no record describing how any individual exercises rights guaranteed by the First Amendment unless expressly authorized by statute or by the individual about whom the record is maintained or unless pertinent to and within the scope of an authorized law enforcement activity.'"

Thus, the White House request for us to spy/inform on each other is blatantly in violation of the U.S. Code. Why am I not surprised?

The "One Picture" may, unfortunately, be prophetic Alan.

Oh Mr. Caruba I love it. Thanks. Mind if I post it on my blog? God Bless~

Yes, Caroyln. You are free to "borrow" anything from this blog and share it with others.