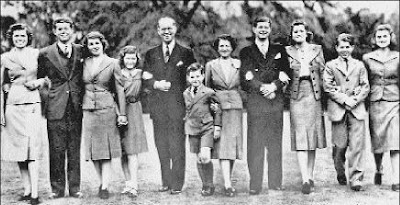 The Kennedy’s have acquired a mythic quality despite the fact that this was and is a deeply flawed family. John F. Kennedy’s time as president was quite brief, but it was enough to engage in one of the great blunders of the post-war era, the aborted invasion of Cuba by a CIA-trained and funded group of mercenaries.

JFK was later able to redeem himself in the confrontation with the Soviet Union over the placement of missiles in Cuba. As Dean Rusk, his Secretary of State, put it, “The other side just blinked.” It was, however, Kennedy who signed off on the growing U.S. involvement in Vietnam. Military “advisors” metastasized into more than 50,000 dead when Lyndon Johnson assumed the presidency in the wake of his assassination.

Unquestionably the most liberal among his Senate brethren, we can thank Teddy for the ghastly “No Child Left Behind Bill” and all others that have advanced the interests of the National Education Association. His support for Obama critically turned the tide against Hillary Clinton’s nomination. He has worn Big Government blinders for years, eager to see it grow for any reason.

Most famously, the drowning of Mary Jo Kopechne on July 18, 1969 became a scandal etched into the political history of the nation. What is not in doubt is that Kennedy was at the wheel of a car that went off a bridge in Chappaquiddick, Massachusetts, trapping the girl, a campaign volunteer for brother Bobby, while Teddy was able to extricate himself. The details of what followed seem to confirm that he was more concerned with avoiding responsibility than for the victim.

The incident mercifully ensured he would never be able to secure the Democrat nomination for president.

His death will occasion 24/7 news coverage, endless colleagues and journalists blathering away and striving to out-do one another in lavishing praise on the old sot. It's rumored that sailors used his bulbous, glowing nose to guide themselves through the waters off Hyannisport.

His brain tumor would appear to confirm “the Kennedy curse” because almost all the prominent members of the family have fallen to some awful end; Joe Jr., the oldest son, died in World War II, John and Bobby were both assassinated, and, in 1999, John Jr. managed to nosedive his plane into the Atlantic Ocean off of Martha’s Vineyard.

Bobby Kennedy Jr. lives on as an environmental wacko who is far too comfortable shilling for Venezuelan despot Hugo Chavez than any Kennedy should ever be. Caroline embarrassed herself in an aborted effort to become a Senator from New York.

The Kennedy’s always seemed to find ways to shorten their lives or to end their marriages after begetting still more kin. The women born to this family or married into it suffered greatly. Only old Joe Kennedy of infamy (he was an admirer of Hitler’s Germany and made no secret of it) managed to live to a point of antiquity. His wife, Rose, did as well.

A graceful and beautiful Jackie Kennedy Onassis alone managed to bring some real glamour and style to this ragged group of ambitious and libidinous power brokers, though her marriage to the Greek shipping magnate took some edge of the legend.

I will have to keep the television turned off for days after his passing in order to avoid the din of coverage. His casket will surely be rolled to the center of the Capitol rotunda to ensure that some final moments of worship can be lavished on him. He may be buried in Arlington in the plot where his older brothers reside in perpetuity. The cameras will follow every lugubrious moment of the ceremonies.

I am willing to bet that future historians will be less forgiving of his role and his contribution to the nation, particularly as regards his voting record. If the nation ever erects a monument to those who have benefited overly from their family connections, the name of Edward Moore Kennedy surely will be engraved on it.
Posted by Alan Caruba at 10:16 AM

His passing will simply give the PTBs an excuse for a another circus. After all, this is what we crave, as Juvenal put it around 200AD,
"Already long ago, from when we sold our vote to no man, the People have abdicated our duties; for the People who once upon a time handed out military command, high civil office, legions — everything, now restrains itself and anxiously hopes for just two things: bread and circuses"

And that is what we'll get. Something to take our mind away from serious thought about affairs of state and the state of the Union. We get what we deserve. Serious thought is passé and Teddy will be transformed at the closing of his eyes into a saint, and a saviour. His legacy remains, however, Chappaquiddick.

Your talking about the infamous old Joe Kennedy reminded me of a book that I read thirty years ago called, A Man Called Intrepid, by William Stephenson. According to Stephenson, in 1975 the thirty years British Secrets Act expired and a ton of shocking information poured out, including the information about the Enigma machine.

Stephenson, code named Intrepid, was the head of British Foreign Intelligence during the war and he wanted to explain why they did what they did with the intelligence they had. As an example…they knew ahead of time which towns were to be bombed by the Luftwaffe.

He also talked about old Joe Kennedy, as he was the U.S. Ambassador to England, who Roosevelt dismissed as Ambassador quite unexpectedly. As I recall, Kennedy was making sounds about running for President when FDR called him back to Washington where they had a private, unrecorded and extended meeting. Kennedy left the White House and nothing more was heard about his running for President.

Unless my memory fails me, I believe Stephenson claimed that Kennedy was passing intelligence to the NAZI’s and the Brits knew it. He implies that this was what FDR had over Kennedy.

What I find most interesting about this book is that there was also a Fifty Years Secrets Act. I waited expectantly for that information to be released. Since the thirty years act and the fifty years acts were created to protect those who made the decisions and they would be dead by then, it makes you wonder how startling and enlightening the information is that is being protected by a fifty years act. To the best of my knowledge it was extended indefinitely. I wonder who it is protecting now. What individuals or families are shielded by this? Just a thought!

Every time that man has opened his mouth, I've cringed. He symbolizes everything I despise about the liberal left. And, just like they've done with Michael Jackson, the media and the leftists will heap mountains of praise upon him when he passes. I've heard that he recently launched a campaign to change Massachusetts law to allow the governor to appoint an immediate replacement for him when he passes, in order to maintain the Democratic majority in the Senate. Never mind the fact that the current law requiring a special election was HIS idea, enacted back when it looked like John Kerry was going to be elected President. Mitt Romney was all set to appoint a Republican as Kerry's replacement, so Kennedy worked to enact the current law, requiring a special election. God forbid they lose a seat....

Mr. Caruba- I will not be watching TV for about 2 months after he passes. Even then, I will most likely see glowing tributes to this man who stands against everything I have ever held dear. I am sorry for the tragedies of this family, but millions of honest, decent hard working and Godly people pass almost invisibly every day. I am no longer interested in the post tributes. I was shocked into the feeling after watching Reagan's funeral. The back biting when he was alive- only to be mourned over later?! It made me quite sick and sad.
Thank you Mr. Caruba

yeah.....that's exactly what I felt like when Saint Ronnie died.

Every time a Kennedy dies, the country is improved.

Sykes, that is a bit harsh.

I disagree with the current batch of Kennedy's politics, but I don't wish them ill.

Rich - the author and 'Intrepid', the head of British Intelligence, are separate persons. One is William Stephenson and the other William Stevenson - I am not certain but think that Stephenson is the author. Either way it is a good book.

You know, Ted Kennedy has died... just a sad day for America don't you think?

Finally, a "shovel ready" project that conservatives can agree upon.