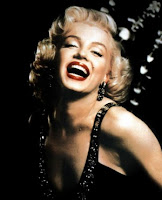 On August 5, 1962, the world was rocked by the news that Marilyn Monroe had died from an overdose of barbiturates. The conspiracy theorists have been at work ever since. She was only 36 years old at the time.

There was nothing comparable until the death of Princess Diana.

Marilyn Monroe had transcended her earthly existence even when she was alive. She was a sex goddess. My generation of young men worshipped her as much as an Athena or Isis had been worshipped in earlier eras and why not?

The camera loved her and we loved the images the camera delivered. Look closely, this is not some pencil thin little girl, but a fully rounded woman with real curves; a famous nude calendar photo of her literally launched Playboy magazine.

I was in my mid-twenties when she died and was familiar, of course, with the movies in which she starred. What people then and even now tend to forget was that she was a very good actress who could sing well too. She had excellent comedic skills. We got to know her in Gentlemen Prefer Blondes, How to Marry a Millionaire, and The Seven Year Itch.

She will live forever, though, for her performance in Some Like It Hot which earned her a Golden Globe Award.

Marilyn Monroe started life as Norma Jean Mortenson but was baptized Norma Jean Baker. A natural beauty with a dazzling smile, she was recruited first as a model. She got a film contract in 1946. Having spent much of her childhood in foster homes, she followed a path in life that seemed more like a Hollywood film script than reality, but it was real and behind the image of the dumb blond was an excellent mind.

I have always thought it takes a very smart woman to play a dumb blond and this has been demonstrated over and over again.

Unseen by the public was her determination to become a very good actress. Her dramatic performance in William Inge’s Bus Stop was proof of her talent.

Her greatest creation, though, was the transformation of Norma Jean into Marilyn.

That transformation and that woman dazzled baseball legend Joe DiMaggio who, despite their marriage and divorce, was said to have remained in love with her. Her last marriage—there had been an earlier one before DiMaggio—was to playwright Arthur Miller; two very different, very accomplished men and both drawn to her because something extraordinary lay behind the Hollywood imagery.

In 1999, Marilyn Monroe was ranked the sixth greatest female star of all time by the American Film Institute.

For those of my generation, she was the star who fulfilled men’s fantasies. Only Elizabeth Taylor could challenge her for breathtaking beauty.

I actually feel sorry for more recent generations whose female stars lack the magic that Marilyn possessed. You could see it in her final film, The Misfits. Her co-stars were Clark Gable and Montgomery Clift, both of whom turned in stellar performances. These were truly well-matched superstars.

One friend said of her, “She was always feminine.” And she was. She possessed the mystique of a truly feminine woman. There were no rough edges, just those fabulous curves.

It is 47 years since her passing and yet, for a certain fortunate generation, she lives.
Posted by Alan Caruba at 7:25 AM

And it would be fitting, wouldn't it to name a newly found planetary body after her. Goodbye Norma Jean.

She was a beautiful woman, no doubt. Natural beauty too. She didn't seem to need to work at being glamorous and classy, it was who she was. What a difference a few decades make in what makes a woman attractive. I'm too young to have known many of these ladies from when they were on the big screen, but when I look at ladies like Marilyn, Audrey Hepburn and Ingrid Bergman, I think they were beautiful. Not just looks, but like you say, they had talent and brains too. They were real, they were class. The women these days make me cringe to be one sometimes. Crass, loud and dress like, well... I'm too polite to say that here! I guess I'm old fashioned. Thank you though Mr. Caruba- for another glimpse at a star that will never stop shining.

Now here is something we do agree on. MM was gorgeous, probably the sexiest women ever.

I never tire of "Some Like It Hot",and "Gentlemen Prefer Blondes".

I think the only one in Hollywood these days who comes close to the past beauties is Catherine Zeta-Jones, but that's just MHO.