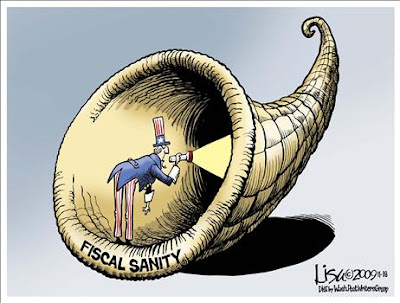 Founded in 1990, The National Anxiety Center, a clearinghouse for information about “scare campaigns” designed to influence public opinion and policy, has periodically issued a list of the top anxieties Americans will experience in the coming year.

“The list,” says founder Alan Caruba, “is subjective; based on an analysis of the past year’s headlines and anticipated events. It incorporates on-going, often long term concerns that Americans have expressed.”

1. Out of Control Government Spending. It is evident to everyone except the White House and Congress that America cannot spend its way out of the deepest recession since the Great Depression, but both have embraced programs that will increase the level of taxation facing Americans, while engaging in “stimulus” programs that only stimulate more anxiety. The lack of job creation in the private sector will be the major anxiety Americans encounter in 2010.

2. Iran. It is evident to Americans and the world that Iran is intent on acquiring nuclear weapons that can be used in a missile attack on Israel and which can reach Europe and other nations throughout the Middle East. The only option available is an attack on Iran’s nuclear facilities and there is considerable anxiety regarding its timing and outcome.

3. Afghanistan War. Eight years after the initial effort to rid Afghanistan of the Taliban, Americans are war weary and increasingly wondering about the benefit of further involvement, its costs, and the possibility that leaving would embolden Islamist enemies there, in Iraq, and worldwide. The Middle East remains a powder keg of instability.

4. The Economy. There is anxiety concerning how long it will take for the American economy to recover from the housing and credit bubble created by Congressional programs such as Fannie Mae and Freddie Mac. No steps have been taken to eliminate these programs and, indeed, other federal programs have been introduced to assist imprudent mortgage holders already in default.

5. Inflation. The raising of the nation’s debt limit, the printing of vast amounts of paper currency by the Federal Reserve, and other comparable actions portend an inflation of prices and a possible default. Moody’s Investor Service has warned both the U.S. and British governments they are in peril of losing their triple-A ratings.

6. Medicare. Medicare, like Social Security, will be insolvent within a few years and Americans of all ages are worried, not only about solutions to this prospect, but about proposals to vastly expand Medicare at the most inopportune time.

7. Illegal Immigration and Amnesty. The drain on the nation’s economy and problems associated with illegal immigration, now estimated to number more than 12 million, as well as yet recently proposed amnesty program continue to worry Americans.

8. Education. The continued failure of the nation’s school systems to meet international standards of scholastic achievement has resulted in the decline in the ability of American’s children’s to acquire basic skills and the knowledge required to compete in a global economy.

9. Diet and Health. The growing number of overweight and obese Americans is a personal and national concern for the overall health of everyone struggling with weight problems and their potential for diabetes and other diseases.

10. American Culture. The increasing vulgarity found in films, on television, in music, fashion, and other elements of American culture remains a concern for many, particularly as it affects the younger generation.

“The good news is that more Americans are no longer concerned about global warming and carbon dioxide as they become aware that the claims justifying these fears are based on deliberately falsified computer models and the fact that the nation and the planet are now a decade into a natural cooling cycle,” says Caruba.

“2010, the end of the first decade of the 21st century, is likely to be seen in retrospect as a tipping point that will determine either a return to traditional standards of fiscal prudence,” says Caruba, “or will plunge the nation and the world into a Depression of cataclysmic proportions.”

The National Anxiety Center maintains a website at www.anxietycenter.com. Caruba blogs daily at http://factsnotfantasy.blogspot.com.
Posted by Alan Caruba at 10:32 AM

This is the most salient article on the subject I've read. There is SO much fluff in the Main Stream Media I no longer watch or listen

Thank you! I sent this to the MSM, but I have strong doubts they "get it" in terms of the issues and concerns of real folks.

Those of you who want war SHOULD PAY FOR IT-why saddle the taxpayer with this nonsense again?
DEMAND a larger cut be taken from your paycheck to pay for it-lets not borrow another dime from the crooks in the FEDERAL RESERVE

Those who want war can VOLUNTEER to fight it-we are WAY too short of men already-or else write Congress and DEMAND that the draft be reinstated.

Nevermind: Please explain the video footage put out by the IRANIANS showing their new missiles.

Please explain their admission that they had a secret nuclear facility outside of Qum.

And please explain why Iraq is not better off without Saddam Hussein?