Job Summits Do Not Create Jobs 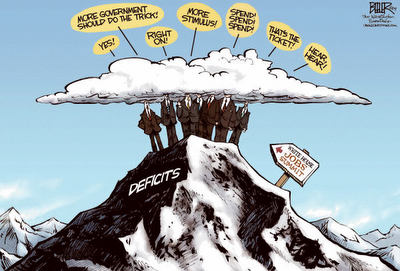 It has taken less than a year for most Americans to conclude that the Obama White House is all about appearances. The “Job Summit” is a classic example. Just how does one hold such a conference without inviting representatives of the U.S. Chamber of Commerce to participate?

Most administrations worry about their credibility, whether most of the public believes what they are saying, but this one doesn’t really care. The result is an endless succession of staged events in which the hand-picked participants all say what the White House wants.

The December 2nd edition of Business Week, however, had something different to say on the subject of “The Slow Road to Jobs.” Reporter Jane Sasseen began by asking, “Could it take as long as five years for the economy to replace all of the eight million jobs lost since the Great Recession began? The most bearish economists think so.”

“Job creation,” reported Sasseen, “is proving to be painfully slow, and Washington is starting to panic. With unemployment at a 26-year high of 10.2% and climbing, the Democrats are scrambling to rev up the economy before the midterm elections next November.” Unofficial estimates put the unemployment rate closer to 17% which would put it in the category of a full-blown Depression.

The notion that the White House or Congress can create any jobs other than government jobs is a fallacy. Real jobs are largely created by small business owners and by major corporate enterprises, but the latter keep leaving the United States because they are paying among the highest corporate taxes to be found anywhere in the world. Neither can plan ahead thanks to the uncertain penalties that Obamacare would impose.

The prospect of an increase in the costs of healthcare insurance and/or the complete government takeover of healthcare is enough to make corporations look for a friendlier place in which to set up shop.

The present recession differs from previous ones. “The U.S. economy, once the greatest job-creation machine in the world, has taken longer and longer to replace the jobs lost in recent recession,” reported Sasseen. “This time could be even worse. U.S. payrolls peaked at 138 million in December 2007; today they stand at roughly 130 million.”

As household and businesses reduce their spending, the prospect of any near-term increase in hiring or economic recovery is unlikely.

Though fond of blaming President Bush for all the ills of the economy, President Obama “shattered the budget record for first-year presidents, spending nearly double what his predecessor did when he came into office and far exceeding the first-year tabs for any other U.S. president in history.”

The stimulus bill has billions allocated for so-called “green jobs” in the area of solar, wind, and biofuels; so-called “renewable energy.” In a December 2 commentary in The Washington Examiner, Thomas J. Pyle of the Institute for Energy Research pointed out that, “At the height of its construction this past summer, the largest solar plant in the United States employed 400 workers. Now that it's complete, the DeSoto Solar Center in Arcadia, Florida, stakes claim to two – yes two – full time ‘green jobs.’”

Contrast this with an estimated 1.2 million energy jobs that would be made available if the Obama administration would permit exploration of the nation’s vast continental shelf for the vast oil and natural gas resources going untapped. There are an estimated 115 billion barrels of recoverable oil and more than 565 trillion cubic feet of natural gas. The Institute for Energy Research estimates those jobs would generate $70 billion in annual wages. Then add in the savings in the cost of importing these energy sources, plus the bonus if increased national security.

The costs of the proposed economy-killing healthcare “reform” could be reduced starting with tort reform, opening the marketplace for the sale of insurance, and a serious effort to reduce the estimated $70 billion in Medicare fraud.

Instead of taking billions out of Medicare and thus likely causing some hospitals to shut down and the widespread denial of care to the millions of seniors who paid into the system, the Obama administration is more focused on government control of one-sixth of the economy. Or what will be left of it after they run it into the ground.

All manner of steps could be taken to energize the economy, not the least of which would be tax cuts that would encourage spending and hiring.

But no, the Obama administration would rather put on a show for the cameras.
Posted by Alan Caruba at 7:33 AM

This article by Tamara Lytle says so much about the liberal left, and their insistence on sucking up Obama's philosophies without questioning where he's taking us, or why...

Tammy, a typical liberal whiner, complains that the business execs who are being asked for ideas to stimulate jobs and put an end to this recession are the same execs who laid people off in the first place. Imagine that ... asking the people who have actually hired employees in the past what it will take to hire them back. What a concept it would be if Obama was actually serious about it. Sadly, it's all just a dog and pony show though. The thinkers among us realize that if Obama was serious about helping businesses recover, he'd simply ease their tax burden and growth would naturally follow.

I wonder if Tamara realizes that employees have to be hired BEFORE they can be laid off? These businesses must have been doing SOMETHING right if they hired all those people in the first place. Does she realize that businesses can't keep paying people when poor economic conditions, excessive regulation and rampant taxation destroy the cash flow that a business needs to make payroll? Who does she think will be doing the hiring if these businesses collapse?

This article pretty much supports what Rush Limbaugh claimed yesterday ... that the Obama administration is looking to blame businesses for our economic woes, thereby turning public opinion against them. He thinks this will allow him to tax them into oblivion and "redistribute" their wealth to others without objection from the American people. And, right on cue, the left-wing media jumps on the bandwagon and begins playing the same tune, right along with him ...

I have news for the Obama administration and their liberal lackeys. We may be slow, but we aren't stupid. The fools and the liberals among us may be willing to swallow this garbage, but the rest of us know a load of crap when we see it. Tamara needs to get her head out of her hind end and start thinking for herself instead of simply regurgitating the garbage her party is feeding her.

Health businesses make up a healthy economy .... anything else is just smoke and mirrors. Atlas Shrugged - read it Tamara.