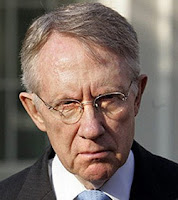 Is it my imagination or does Harry Reid, Majority Leader of the Senate, resemble Ebenezer Scrooge saying “Bah! Humbug!” whenever anyone suggests that Obamacare is possibly the worst piece of legislation in decades?

As of this writing, Harry cannot find enough DEMOCRAT votes to pass this horror. He doesn’t need Republican votes, but like his counterpart, Nancy Pelosi, he is being forced to find millions with which to bribe those hold-out Senators to vote for a bill that exceeds two thousand pages and creates a literal madhouse of new bureaucracies.

For old people—-and that includes me—-it is a virtual death sentence in the event we become ill and, for most older people, that is a virtual certainty.

As Mortimer B. Zuckerman, Editor-in-Chief of US News & World Report, had to say this month, “Save the cheers for the looming healthcare ‘reform.’ It looks more and more like something that will take us over a cliff. None of the proposals offer credible solutions for reining in the runaway cost inflation that is crippling us.”

But there may not be any GDP or health insurance programs by then because the United States will be in default, unable to pay back the money it has borrowed; not unlike a lot of Americans who charged too much on their credit cards or took out mortgage loans they could not afford.

Moody’s Investors Services just announced that both the United States and Britain must take action soon to get their public finances in order if they are to avoid being downgraded from their top triple-A credit ratings.

Let me put it this way, the United States of America cannot afford a healthcare “reform” in its present form and cannot afford a “Cap-and-Trade” bill that would tax all energy use. It is impossible to add people to Medicare at the same time it is approaching insolvency. When you make energy more expensive, manufacturers move to places where it is affordable. Places like China where they are opening a new coal-fired plant every ten days to generate electricity.

Terence P. Jeffrey of Cybercast News Service put it quite accurately and quite bluntly in early December when he wrote that Obama will bankrupt America. Citing figures developed by former U.S. Comptroller General David Walker, Jeffrey reported that the total value of the federal government’s ‘unfunded liabilities’ stood at $56.4 trillion. The nation’s annual GDP is about $14 trillion and we are in the hole by a factor of 4.

The financial crisis has been stabilized. Much of the TARP funds have been is returned by the banks, some of whom were literally forced to take it, and Obama’s “solution” is to borrow from TARP for more bogus “job stimulus”, even though the law expressly forbids it

Jeffries noted that, “In 2008, President Bush’s last year in office, the federal government spent $2.983 trillion. Under Obama’s plan, according to the Congressional Budget Office, annual federal spending will climb to $4,982 trillion by 2019.” Over the next decade “Obama’s plan would increase the national debt by a total of $7.137 trillion, running deficits averaging $713.7 billion per year.”

And I haven’t even discussed what a horror Obamacare is! Americans would be in absolute bondage to the proposed healthcare system that Harry Reid is trying to pass.

A government committee would decide what treatments you would receive.

Healthcare would be provided to all non-U.S. citizens, illegal or otherwise.

A National ID Health card will be issued and government will have real-time access to your financial records.

No company could sue the government for price-fixing. There would be no “judicial review” against a government monopoly.

An employer must enroll employees into the public option plan and must pay for healthcare for part-time employees and their families!

Any individual who doesn’t have an acceptable healthcare plan according to the government will be taxed 2.5% of their income.

This kind of tyranny goes on for two thousand or more pages. It is worse than you can even imagine.

And Ebenezer…er…Harry Reid, doesn’t care. Neither did Nancy Pelosi and, since it is one of his key legislative initiatives, neither does President Obama.

“Apre moi, le deluge” said Louis XV of France as he watched the end of the monarchy that led to a bloody revolution. President Obama may well say something similar, but for him it will be said in triumph.
Posted by Alan Caruba at 12:51 PM

Off topic, and I apologise, but would like to draw this to your attention, comment re emails between Tom Wigley and Phil Jones of the CRU...this is just one of the smoking guns...

"the person he was rebuking in this email, Michael Mann, was an author of this same IPCC who had his now discredited “hockey stick” included prominently in the third IPCC report to “prove” what now seems almost certainly false - the today’s temperatures are the hottest for more than a 1000 years. The Keith Briffa he attacked in the first email is also an IPCC author, whose similar attempt to “prove” there was no medieval warming is now also regarded as completely discredited. The Phil Jones that Wigley sent the first email to is another IPCC author, who vowed to keep out sceptical papers from the IPCC, urged the destruction of evidence and boasted he had used a “trick” to “hide the decline” in temperatures in anothe graph used by the IPCC..."

Andrew Bolt is doing some of the best reporting on Climategate.

And it's not necessarily off-topic if you consider that it is part of the huge world of lies being foisted on everyone everywhere.

It is sometimes dizzying to deal with what the politicians and the Greens and others are claiming day-in and day-out.

To your specific point, NOTHING that the IPCC reported has any measure of scientific truth to it and yet there's a huge conference going on in Copenhagen devoted to it.

Take a good look at the face of this clown, and then look at the "gutless appeaser" here.

Dr. Seuss was a prophet? Who knew?

And what is the gutless ebenezer in the game for? Why, the profits, of course.

Like you say, Alan, it's not necessarily O.T., to point out that the filth in one corner of the pig sty is the same as the filth in the others.

Just saw this posted over at DirectorBlue. It speaks for itself.

You cannot just look at "the" polar ice cap (there are two). Why is the ice coverage at the South Pole growing?

"A picture is worth a thousand emails and pictures of the polar ice caps show a 20% decrease since 1979." Katie Couric in her Notebook."

I can only guess that Katie is not aware of the South Pole & that the Antarctic ice sheet increased 5% during this same 30 year period.

This might be off-topic but it's not off the mark :)