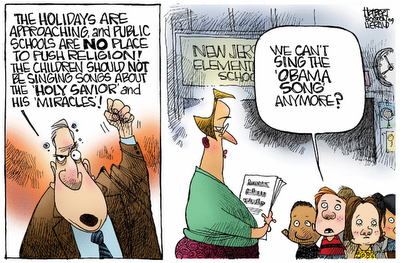 It’s become the new Christmas tradition; a handful of people who demand that everyone else stop celebrating Christmas by displaying manger scenes in public places or stop singing Christmas carols in school, or stop saying “Merry Christmas.”

These people are annoying twits, but they too often get their way because the courts back them with the claim that the state cannot condone any religious expression in public places. Given the long history of religious faith and practice from the nation's founding and earlier, this is as idiotic as it gets. It runs contrary to America’s long tradition of tolerance.

While holiday music could still be taught in music classes and songs with religious content “not specifically related to the holidays” could be performed in concerts, the music of Christmas was banned. The court rejected the plaintiff’s claim that the school was unconstitutionally restricting student’s access to ideas.

“Those of us who were educated in the public schools remember holiday celebrations replete with Christmas carols, and possibly even Chanukah songs, to which no objections had been raised. Since then, the governing principles have been examined and defined with more particularlty,” said Judge Delores Korman Sloviter in the 22-page opinion.

The controversy dates to 2004 when the Maplewood-South Orange district extended a 20-year-old 1990 ban on singing religious songs in school performances to include instrumental versions of those songs. An appeal of the decision is being considered.

Many, many years prior to the 1990 ban, I passed through the Maplewood-South Orange schools, from kindergarten to graduation from twelfth grade. In the earliest years, America was at war in Europe and the Pacific. In Europe, it was not only against the law to sing Chanuka songs, it was against the law to be a Jew and punishable by death. Following victory in 1945, Christmas took on a particularly joyous quality when the troops returned home and began families. In 1955 I bade goodbye to Columbia High School.

All through those years, Christian and Jewish students sang Christmas carols, many about a world at peace with good will to all men. In my experience, none of the Jewish students ever gave a single thought to singing the carols beyond sharing the joy with their Christian friends. Those songs brought everyone together.

Now they drive apart those who respect the traditions of all religions and those atheists who insist that everyone else reject belief in a higher power or give voice to it. Not content with toleration, they appeal to the courts and, as is the case in New Jersey, they get their way.

I am no jurist, but it seems to me that the First Amendment says “Congress shall make no law respecting an establishment of religion, or prohibiting the free exercise thereof or abridging the freedom of speech…” Singing a Christmas carol or Chanuka song is not the “establishment” of religion and banning them in school-sponsored “holiday” concerts is a complete absurdity. Too bad the U.S. Third Circuit Court can’t understand this.

For myself, I am happy that I attended Maplewood’s school in what surely were better times, guided by teachers who taught us that we could all take joy in each other’s holiday celebrations.
Posted by Alan Caruba at 7:29 AM

Alan, you write, "Now they drive apart those who respect the traditions of all religions…".
This is the goal. The country cannot stand together if we find ourselves enclaved in a thousand different ways none of which is American.

You would think that Al Sharpton and Jesse Jackson would be all over this!! OH WAIT!! There aren't any Ho's involved...well the ACLU and Rainbow Coalition and other organizations will....er...naw. There wouldn't be an enormous sum involved..what about "Da Prez"????,nope. Congress??,(shudder the thought).
Maybe the UN??, again no.
Perhaps Santa will bring US some hope this year. I don't think we can take much more change...
I believe Dave's DDD, has it right.

IS there ANYTHING these jerks LIKE about our country? And if not, one has to wonder ... Why are they even living here? I'm getting so sick and tired of trying to defend our country and our way of life from all these assaults. I have no idea who said it first, but I'll say it again ... AMERICA, love it or LEAVE it!

What a great post, Alan! Yes, I still today remember the Hannukah song we sang for our grade school concert, even though I was a Christian. It didn't matter then and it doesn't matter now. The only way they can justify these types of things is because they ignore the Constitution.
Guy, I feel your pain. It's exhausting sometimes.