I Do Not Forgive You, Jimmy Carter 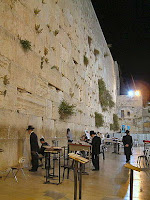 The news of the day before Christmas is that former President Jimmy Carter has apologized for anything he has said or done to offend America’s Jewish community and presumably around the world.

The news was welcomed by the national director of the B’nai B’rith Anti-Defamation league, Abraham Foxman, who said that it was “incumbent for us to accept” the apology, but Foxman does not speak for me or for the American Jewish community.

I do not accept the apology and neither should anyone who holds the state of Israel as the fulfillment of a 2,000 year old dream of return to the land in which Judaism took root and flourished through exiles and dispersion.

My reasoning is that Carter has spoken only with the prospect that his grandson, Jason, is anticipated to run for public office in Georgia in a congressional district with what is reported as “a vocal Jewish population.” It’s politics. It’s not a confession of the heart. Jason hailed the apology as a “great step towards reconciliation”, but I suggest that it is deeds, not words, that matter.

The former President is credited with trying to resolve the Palestinian conflict with the Israelis and gained a Nobel Peace Prize along with the terrorist, Yassir Arafat, but that prize has long since been tarnished and discredited for having also been awarded to the charlatan Al Gore and the United Nations Intergovernmental Panel on Climate Change, and most recently to President Obama who has done nothing of significance to earn it.

It was Carter’s 2006 book, “Palestine: Peace Not Apartheid” in which he compared Israeli efforts to defend themselves against wars and a campaign of terrorism with South Africa's hateful system. Present attacks have abated only with Israel's action against Hamas in Gaza, a part of Israel from which the Israelis withdrew in yet another effort to achieve a peace that is still rejected.

If the so-called Palestinians and the greater Muslim community throughout the Middle East continue to plan war against Israel, an apology by Carter pales in the face of this reality. If the Jordanians and Egyptians could sign peace agreements with Israel, surely other Middle Eastern nations could do the same.

Jerusalem is mentioned more than 700 times in the Jewish Holy Scriptures, but not once in the Koran. Jews pray facing Jerusalem. Muslims pray with their backs toward Jerusalem. The Al-Aqsa mosque in Jerusalem was deliberately built over a site sacred to Jews, deemed the rock where Abraham was commanded by God to spare the life of his son.

Al-Aqsa has twice been destroyed in earthquakes. Jews are forbidden access and restricted to prayers at the Western Wall.

The calumnies and lies about Israel that the former President has lent his name to and the support he has demonstrated for the enemies of Israel cannot be wiped clean by an apology.

A million Christian and Muslim Arabs call Israel home and enjoy full citizenship. They face an Iranian nuclear annihilation with their Jewish neighbors.

It is time for Israel’s enemies to embrace the message of peace on Earth, but a militant Islam forecloses that elusive goal for all mankind and the land where it was first proposed.
Posted by Alan Caruba at 8:03 AM

I believe your assessment is absolutely correct. For carter to change his tune there had to be an ulterior motive. Politics as usual for the inconsequential moron.

Couldn't have said it better myself. I think at this point we need quite a lot more than a few simple words, even if he asked someone how to say it in Hebrew.

Thank you both, Sailingbum and Dani.

Jimmy Carter is no friend of Israel or of Jews.

The only way I would believe him is if, in addition to an appology, he worked VERY hard to undo the extensive damage he's done, something that would probably require a full time effort for the rest of his life.

Funny, but I don't seem to have gotten the memo where Abe Foxman asks me if I mind if he speaks for me. I certainly do not.

OK, Muslims, let's see the "respect" you show Al Aqsa. BOTTOMS UP! Yeah, that's about what I would expect from them.

Defending Hamas and the people they represent is indefensible.
Alan C.

"Defending Hamas and the people they represent is indefensible."

Yes, and unforgivable. And they were probably able to murder the Rabbi because Israel was forced to dismantle checkpoints at the behest of the State Department and others who side with the Arab enemy over perhaps the best ally America has ever, could ever, have.

Carter never was the brightest pebble in the brook.