The Bigger They Are... 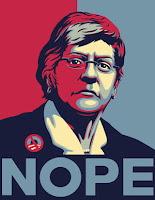 The phrase, “The bigger they are, the harder they fall” comes from the world of boxing, but it applies increasingly to government.

Americans have seen that the bigger the government grows, the less able it is to respond to both the major needs of Americans, like national security, and the immediate ones such as the victims of Hurricane Katrina.

The thing I liked most about our response to 9/11 was the fairly swift response of President Bush and the U.S. military. It wasn’t long before bombs were falling in Afghanistan’s Tora Bora. The thing I liked least was the astonishing incompetence that followed in the wake of Hurricane Katrina.

The consolidation of several agencies under the umbrella of the Department of Homeland Security was possibly a good idea though it has its detractors. Americans are forced to believe that both they and our intelligence community are functioning well enough to protect us right up to the moment we learn they are not. It is thankless work to know you have deterred terrorist attacks only to have that wiped out with an incident like the one on Christmas.

It is made worse when, as in the normal course of things, the people at the top of the departments and agencies are too often the end result of politics, not competence. Janet Napolitano, the former Governor of Arizona, is a classic example of someone with virtually no security experience being tasked to oversee a department entirely devoted to security.

It is clear to everyone that Janet Napolitano needs to be replaced. She poses a danger to the nation’s security because she has probably demoralized her entire department and because her judgment is severely impaired.

Beyond Napolitano, there are the many “czars” that have been added to the White House payroll, the director of what has become a rogue agency, the Environmental Protection Agency, and serious concerns about an Attorney General who dismisses action against union thugs at election centers while extending the rights asserted by the U.S. Constitution to admitted enemy combatants.

The November 2010 midterm elections will afford Americans the opportunity to rid itself of as many Democrats as possible in Congress and, presumably, Republicans that will replace them will have learned their lesson since 2006. There is one overriding requirement facing Congress and that is to put our fiscal house in order, pay down debts, and get out of the way of Main Street so they can begin to create jobs again.

The only jobs government can create are government jobs and there are clearly far too many of them.

I must confess I do not see the Obama administration doing any of this. What I expect is more idiotic “Cash for Clunkers” and “Cash for Caulkers” programs, more billions wasted on “clean energy” industries that cannot attract private investment, and in the fullness of time, more revelations about corruption in the body politic.

If the Republic should fail from the prolificacy we are witnessing, it will take all of us with it.
Posted by Alan Caruba at 10:46 AM

I love all the comments I'm reading today equating Janet Napolitano's failures to what happened on 9/11. Considering the fact that the Department of Homeland Security didn’t even EXIST at the time 9/11 happened, I find it difficult to buy into their arguments. We all remember that after 9/11, a lot of people, including George Bush, WERE questioning how our intelligence system had failed us, and the result was the establishment of the Department of Homeland Security. Now, after all these years, can’t we expect it to be FUNCTIONING and doing the job it was created to do? Blaming Bush, which has become a VERY tired argument, doesn’t change the fact that Janet Napolitano clearly failed to get the job done, and from recent comments, appears to lack even a basic understanding of the situation. Claiming that this attack was “stopped” and that the “system functioned” is ludicrous. I suppose she would have made the same claim if the bomb had gone off and they had successfully cleaned up the 300 bodies that were scattered all over Detroit. I don’t want to make this into a left vs. right issue. This has to do with competence vs. incompetence. She should be replaced immediately with someone who understands the threat we face and has the skills and knowledge necessary to get the job done. While we’re at it, we should probably also replace the guy who hired her. He obviously failed to adequately examine her qualifications. Oh, that would be Obama wouldn’t it? You probably won’t see him taking any responsibility for this, and I seriously doubt that he will have the stones to fire Janet Napolitano until she fails us again. Let’s hope that when that happens, we won’t be watching television footage of a major American city in ruins …

Meanwhile, despite her claims to the contrary, it is NOT safe to fly today, nor will it be safe any time soon. Our struggling air transportation businesses have taken a big hit this weekend, and you can expect to see more airlines failing, more satellite businesses wiped out, and more jobs lost. Hope and change? Not exactly what I had in mind. You?

Janet the Nappy-looking lowlands gorilla is only the tip of the iceberg...

The entire Obama administration is the perfect example of EPIC FAIL, and it's only going to get worse...

Oh gosh, Alan, I never thought of that, having been in VietNam in the sixties. Where is MacNamara when we need him?

Excellent post Mr. Caruba- I can't add anything to that. It's been a hard year for a lot of us, and even though I don't see anything looking better, I still say, Happy New Year to you and your family! God Bless~