Obama: What a Difference a Year Makes 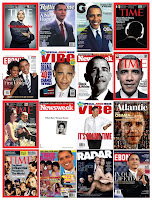 Historians are likely to look back at 2009, the first year of Barack Obama’s term in office and assess the damage it has done to Americans and to the image of America as the primary line of defense against the world’s thugs.

I long ago stopped reading news magazines like Newsweek, Time and U.S. News and World Report because they became increasingly useless as a mean to know what was actually occurring. Throughout the 2008 campaign they and others devoted cover-after-cover to the face of Obama, becoming in the process a very bad joke. It was a total abnegation of objectivity.

I am soon to drop my subscription to The Economist, a still widely respected news magazine because it has ceased to meet even the most fundamental standards of accuracy regarding an alleged “global warming” even though the planet has been cooling for a decade.

I am one of those people, though, that saves his magazines as a lens to look back over the year and a review of the reporting of The Economist in 2009 regarding Obama provides a useful measurement of his first year as seen by the magazine. Below are quotes that track his progress or lack of it.

January 17-23 edition: “Mr. Obama seems to be different. By offering the most prized cabinet job to his rival, Hillary Clinton, and by keeping Robert Gates, the defense secretary, who has done a good job, Mr. Obama has shown a determination not to surround himself with cronies.”

March 28-April 3 edition: “Hillary Clinton’s most effective quip, in her long struggle with Barack Obama for the Democratic nomination last year, was the Oval Office is no place for on-the-job-training. It went to the heart of the nagging worry about the silver-tongued young senator from Illinois; that he lacked even the slightest executive experience, and that in his brief career he had never really stood up to powerful interests, whether in his home city of Chicago or in the wider world. Might Mrs. Clinton have been right about her foe?”

June 27-July 3 edition: “If he were starting from scratch, there would be a strong case (even to a newspaper as economically liberal as this one) for a system based mostly around publicly funded health care. But America is not starting from scratch and none of the plans in Congress shows an appetite for such a European solution. America wants to keep a mostly private system—but one that brings in the uninsured and cuts costs. That will be painful, and require more audacity than Mr. Obama has shown so far.”

August 1-7 edition: “If the opinion polls are to be believed, Barack Obama is now, six months into his presidency, no more popular than George Bush or Richard Nixon were at the same stage in theirs. His ratings are sagging particularly badly with electorally vital independent voters: two-thirds of them think he wants to spend too much of their money.”

October 17-23 edition: “Most of all, Mr. Obama needs to fight this war (in Afghanistan) with conviction. His wobbles over the last month have done more to comfort his enemies and worry his allies than any recent losses on the ground. Only if he persuades his troops, his countrymen and the Taliban that America is there for the long haul does he have a chance of turning this war around.”

November 28-December 4 edition: “Which will he be, clever or weak? Does this president have a strategy, backed if necessary by force, to reorder the world? Or is he merely a presidential version of Alden Pyle, Graham Greene’s idealistic, clever Quiet American who wants to change the world, but underestimates how bad the world is—and ends up causing harm?”

December Special Edition: The World in 2010: “By 2010, moreover, Mr. Obama will no longer be able to fall back on the excuse that all of this was beyond his control…The coalition Mr. Obama marshaled in 2008 around the alluring but ambiguous banner of ‘change’ will splinter…Mr. Obama will find no consolation on the world stage…In his second year, it will become increasingly clear to people at home that America risks losing its status as the world’s sole superpower and undisputed top nation as its relative economic power wanes.”

I learned as a journalist that news is history written in a hurry and usually without all the information easily at hand. The Economist’s editors have reacted to Obama in the same way as a growing majority of Americans and others around the world.

Americans and the rest of the world have had a year in which to watch Barack Obama and it has been one of constant disappointment and growing fears. That trend is unlikely to change.
Posted by Alan Caruba at 2:22 PM

He probably don't care or give a ..well...rip,(I'll keep it PG). The minute he took the Oath he was set for life. Pension, Medical Care, 24 hour protection, etc., etc. ALL paid for by US. I have always been wary of people that have written an autobiography in their early 40's. I will say this, Mz. Hillary sold out BIG TIME!!! She was the working man's kind of man. Just look at the leash she put on Bill..

If the courts find he was ineligible to hold the office, he will be stripped of the perks and pensions...and, best of all, every law he signed will be automatically null and void.

It is our only hope at this point.

Hopefully the harm he has done to the Democrat party will last through the 2012 election, so that the left leaning spendthrifts, including himself, are weeded out. If that happens, in my opinion, he will have done a great service to this country.