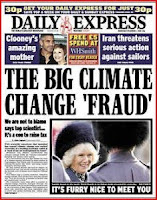 To those who think that the revelations about the massive international fraud called “global warming”, now called “climate change”, will deter the efforts of those who have devoted years and millions to convince the public that drastic measures must be taken to “save the Earth”, let me put you straight on that topic.

A vast Green bulldozer of propaganda will be let loose upon everyone watching television, reading newspapers and magazines, or visiting websites in order to smear those standing up against this juggernaut of foundations, environmental organizations, government agencies, and the central organizer of the fraud, the United Nations Intergovernmental Panel on Climate Change.

A legion of “science” and other reporters will do everything in their power to “explain” the many emails between the perpetrators of the “global warming” fraud and to repeat the lies that underwrite the passage of laws such as “cap-and-trade” and the Obamacare legislation, both of which are a dagger aimed at the heart of the American economy.

The good news is that it will not work.

“In a statement today, the Obama administration announced that the President will attend the international climate talks in Copenhagen on December 9th…more than a week before international leaders will arrive to show their commitment to shaping an ambitious and comprehensive climate deal,” said Moglen.

“The administration’s announcement proposed the same inadequate emissions targets that were included in the House-passed climate legislation. By taking his cues from a Congress heavily influenced by the fossil fuel industry, Obama continues to shirk domestic and international leadership on climate policy.”

Lies! The Greenpeace “attack” on President Obama is a subterfuge to distract everyone from the FACT that so-called greenhouse gas emissions, primarily carbon dioxide, have nothing to do with the equally bogus “global warming.” More to the point, the Earth has been cooling for the past decade!

“Science calls for the United States and the developed world to cut pollution by at least 26 to 40 percent below 1990 levels by 2020, and to reduce greenhouse gas emissions by 80 to 95 percent by 2050,” said Moglen.

Carbon dioxide is not “pollution.” It is the one gas vital to the growth of every kind of vegetation on Earth. It is to plants and trees what oxygen is to human beings and other creatures.

The “science”, however, has been revealed to have been deliberately rigged by a cabal of previously “respected scientists” who fed their false data to the UN Intergovernmental Panel on Climate Change over the years to support the hoax. That, in turn, was used to justify the UN Kyoto Protocols and the treaty being put forth at the upcoming climate conference, beginning December 7 in Copenhagen.

Greenpeace is just one of many Green organizations that have devoted themselves to the hoax. On November 23, Keya Chatterjee, Acting Director of the World Wildlife Fund’s Climate Program, released a statement commending President Obama for supporting “an emissions reduction target” in Copenhagen, adding that there was a need to provide financial support for “poor and vulnerable countries that are suffering the impacts of climate change and those that aspire to contribute more to the clean energy economy.”

At the heart of the global warming hoax has always been the intention to force a reduction in the use of coal, natural gas and oil by industrialized nations and to secure the transfer of funds to underdeveloped nations that were exempted from the original Kyoto Protocols. Also exempt, China and India!

One must wonder what the World Wildlife Fund has to do with climate science. However, the same day, the WWF released another statement predicting that “sea level rise could dramatically increase risks to buildings, transportation, infrastructure and other assets exposed to severe storm surges in the coastal areas of the U.S. A WWF “study” had been underwritten by Allianz SE, an insurance company. But the seas are not rising beyond an inch or so every century.

“With each new study, the alarm bells become deafeningly clear that climate change will have devastating consequences for our economy and way of life,” said David Reed, Senior Vice President of Policy at the WWF.

These “studies” and the rigged climate data of the IPCC have nothing to do with science, nor will they cease any time soon.

Indeed, as the world draws nearer to the Copenhagen climate conference, they will increase in intensity because this is possibly the last change the Green juggernaut has to strip America and other nations of access to and the use of the energy sources they need to continue providing a modern and improved standard of life to the people the world.

The global warming fraud is an attack on humanity.
Posted by Alan Caruba at 6:59 AM

Thank God we have the fraudulant fraud, Senator "Don't call me Ma'am" Boxer defending the fraud.

Leave it to the Democrats to institute a tax to change the weather.

"An attack on humanity" that is doomed to fail.

At the risk of sounding naive, I believe the worst is over. In spite of shonky ethics and lies true science will always win, and those who hope to benefit from disinformation, exaggeration and fraud are being uncovered. Thank Big Al. He invented the net and the power it gives to his enemies.

Hey everybody, are we having fun yet?

I sure am...and I am just warming up...no pun intended!

We are so lucky that is so happens to be cooling now - it could be just as well be warming given the unpredictability of the weather.
I feel a bit like we've been shot at and missed somehow.

The cat is really out of the bag, now. Phil Jones and Micheal Mann are trying to scratch at each others eyes with Mann making the biggest barge pole he can muster while accusing Jones of 'errors of judgement'.

Oh boy, this is fun to watch as these thieves of the truth fall out. They are all on the back foot as they try to minimise and obfuscate what they have written in their cocky, emboldened emails.

As far as the MSM is concerned they have given the cause of Truth the best present of all. They have choked and spluttered and delayed over this Revelation of Warmist Lying and cover-up by delaying any meaningfull comment in their pages and airwaves.

On a golden platter, collectively, they have given the Truth cause some twelve days of unopposed comment to lambast these fraudulent trick-scientist whose actions and lies brought the world to the brink of economic disaster and civilisation retrograde.

It may still happen; the momentum will not stop at Copenhagen but it will be minimised as truth and realisation permeate into the collective psyche which will be translated into physical opposition.

I feel that utter disaster has been diverted off course for the time being. The Truth cause has to keep up the momentum and pressure. People power will overcome these charlatans in science and government and Wall Street.
Keep hammering the subject, Alan.

I've been thinking about it, and this "attack on humanity" thing just might make some sense. Perhaps the planet WOULD be better off if we could thin our population out a bit, especially if we could be selective about it and focus on getting rid of the people who present the biggest danger to the planet....

I'd like to formally volunteer to be on the committee that decides who gets to stay and who has to go. I'm sure we could easily come up with some sort of "widely accepted" scientific procedure to help with the process, and once it's in place and we've declared that the "debate is over", who could argue with it? We'll call it the Climate Rejuvenation and Protection Protocol, or CRAPP for short.

We could start with the current crop of bogus "climate scientists" and work our way down to the numerous tax-and-spend politicians and traitors in our government. Any one of these clowns represent a much bigger danger to the planet than our incandescent light bulbs or gas guzzlers ...

Ain't it amazing how politics resemble the book "Animal Farm". Makes me wonder if Orwell was pointing at DC in most of his writings. Feed them pigs! There will just that much more to go around when the time comes.
No wonder there is such a drug trade up there. Most of them need something so they can sleep at night.

Something happened with the comments organization.
My comment was printed under 'Abbie S'...
She does exist, in England, and I am not her. I am a male engineer in Calgary, Canada.

Could you both have the same ID so far as Google is concerned? Beyond that, I have no idea for the mix-up. I either approve or reject comments for posting and that is the limit of my participation in the process.