How the U.S. Can Become Greece 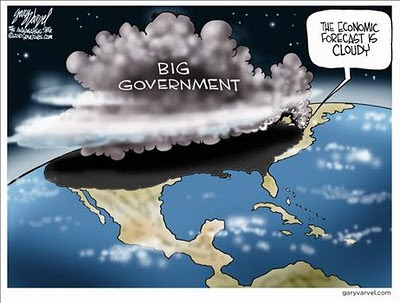 I find it interesting that an entire nation like Greece can face bankruptcy.

Greece will be loaned billions that it is not likely to ever repay. Meanwhile, Spain, Portugal, Italy, and Ireland are financially shaky as well. England is not much better off and the United States is printing money in the basement of the Federal Reserve while also borrowing it from China, Japan, and everyone else.

Our current miseries can be traced in part to too much government intervention and too many regulations. My hero, Wayne Crews of the Competitive Enterprise Institute, keeps track of such things and, in April, pointed out that last year Congress passed 125 bills, but federal agencies issued 3,503 final rules. Congress tasks its agencies to fill in the blanks when it passes new laws, but this now constitutes “regulation without representation,” says Crews.

The prime internal directive of government agencies, i.e., all bureaucracies, is to expand in power and budgets.

“Last year alone, the deficit was $1.4 trillion. This year’s deficit is expected to grow to around $1.8 trillion,” wrote Crews. “The hidden tax of federal regulation cost businesses and consumers an additional $1.187 trillion last year—none of which shows up in the federal budget. Regulation eats up an additional 8.3 percent of GDP.”

Capitalism can give you fits, but socialism is the doorway to financial disaster. Even the People’s Republic of China gave Karl Marx the heave-ho and has embraced capitalism. After Mao died, his successor told everyone “to get rich is glorious.”

The global embrace of socialism, particularly following World War Two, may have had something to do with a desire to avoid further wars the likes of which left all the nations involved in terrible shape. Only the U.S., shielded from the devastation of Europe, Russia, and Japan, came out in a position to thrive.

One result, however, was the creation of the United Nations, no doubt the most corrupt international organization of the modern era. It needs to be replaced with something less predatory and less in control of demagogues. A coalition of democracies is needed.

The U.N. was followed by the European Union, an organization rapidly discovering that a huge, centralized bureaucracy and its currency is vulnerable to the kind of trouble being caused by Greece. There’s a lot to be said for individual nations being in control of their own affairs and forming mutually beneficial partnerships with other nations.

In the U.S. the generation after World War Two became the Baby Boomers, born between 1946 and 1964, who were possibly the most spoiled and infantilized group in our short history.

They yielded the “counter culture” of the 1960s and the folks who have since risen to power in Congress and other elements of our society. The result was the rise of many of the nation’s societal ills that include the drug culture, the rise of feminism, and the emergence of gay and lesbian demands that, along with abortion, have undermined the keystone of society, marriage and families.

Does it surprise anyone that the president has nominated a second woman, Elena Kagan to the Supreme Court; a person who, like himself, has no paper trail, but who reportedly has a preference for abortion, gay rights, unions, and an antipathy to corporate America?

The push for “social justice” has played a major role in our current financial problems. The prime examples are two government sponsored entities, Fannie Mae and Freddie Mac. Having been previously bailed out to the tune of billions, Freddie Mac has requested $10 billion more while Fannie Mae is asking for an additional $8.4 billion. The taxpayers were on the hook for $145 billion in losses when the government was forced to take control of both in 2008.

There is no legitimate reason for government to be in the mortgage business or for owning General Motors and other private enterprises. Amtrak, for example, has never made a profit under government ownership. This kind of insidious nationalization is the road to ruin.

Socialist detours into Social Security and Medicare (both programs now teeter on collapse) culminated in the election of the first Marxist president the nation has ever seen. The intention of the President and the Democrat Party in Congress is to push the nation fully into the socialist camp. That would bring about a predictable collapse.

The pushback has begun, however, in States like Virginia and New Jersey where bedrock Republican conservatism elected two governors and, even in Massachusetts where a new senator won election by opposing Obamacare.

The midterm elections in November, if power in Congress changes hands to similar minded Republicans, remains our only hope that Obamacare can be defunded and even repealed. After that, the sobering fact that government is spending and regulating far too much may occasion the changes necessary to return the nation to a philosophy of fiscal responsibility and restraint.

The Founding Fathers had a profound distrust of too much government and fashioned a Constitution that would divide power among the legislative and executive branches. It expected the Supreme Court to protect the original intention of the Constitution.

Now it is up to a new generation or two of Americans to save the greatest experiment in democracy from itself.

"Congress tasks its agencies to fill in the blanks when it passes new laws, but this now constitutes “regulation without representation,” says Crews."

This is one of the biggest challenges in getting America back to a representative form of government. These agencies don't answer to the public but instead actually believe they are the bosses.