"A Date that will live in Infamy" 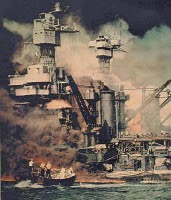 A 2008 commentary is a reminder of what this day means.

December 7, 1941, “A date that will live infamy” is a fading memory for those alive at the time and most certainly for those born since that day. For most Americans I suspect it is just a date they may have read about in a high school history book or seen dramatized in documentaries or films.

It was, if you are still trying to recall its significance, the day the Empire of Japan attacked the U.S. fleet in Pearl Harbor. It was the date that Franklin Delano Roosevelt referred to in his speech to Congress calling for a Declaration of War against, not only Japan, but the Nazi regime and its Axis partner, Italy. It was the date when the term World War took on a whole new meaning beyond the WWI trenches in France.

In Hawaii, when I rode out to visit the USS Arizona memorial in Pearl Harbor, the thing I noticed was that I was sharing the ferry with dozens of Japanese tourists. It had never occurred to me that it was, of course, part of their history as well. I recall their pausing before the wall with the names of the sailors still entombed below to offer prayers for them. That is what peace is all about.

The cliché is that those who do not learn the lessons of history are doomed to repeat them. It is a cliché because it is true.

To be a child in America from 1941 to 1945 was to know that America was at war. If you did not know exactly what that meant, you understood it was important. For me, it was the memory of trains filled with young men in uniform as I and my Mother made the trip to visit my grandparents who lived on the drowsy Shrewsbury River in Monmouth County, New Jersey. Years later I would be one of those young men leaving Fort Dix in uniform.

From the end of World War II until 1991 the Cold War continued as the United States and its allies stood firm against the Soviet Union. We extended our protection in the Pacific to Taiwan, waged hot war in Korea and Vietnam, and waited until communist China concluded that capitalism was a good idea, as least in terms of building a viable economy, if not in terms of human rights.

To grow up during World War II was to know that there was absolute evil in the world, the likes of which would be revealed in the Nuremberg trials and similar military trials for the leaders of Japan’s military solution to problems that have since yielded to the pursuit of profit. Today, it is in part Japan’s (and China’s) purchase of our treasury bonds that helps prop up our profligate government.

There is, however, still absolute evil in the world. On 9/11, another sneak attack reminded America of that fact. The evil is called Islamism or Islamofascism and all who support it either openly or covertly, eagerly or passively. It is a fever loose in the world that will kill a lot of people before it is destroyed. Neither communism, fascism, nor have dictators disappeared.

The good news is that, since the end of World War II in the lifetimes of many Americans and others, democracy has been gaining in nations around the world. Winston Churchill, of course, said it best. “It has been said that democracy is the worst form of government except all the others that have been tried.”

I suspect that few Americans living today have any idea of the significance of December 7, 1941. It literally changed the world and catapulted America from a Depression wracked nation into its current superpower status.

It also produced one of the all-time worst ideas, the United Nations.

Generations since those times live with the legacies of December 7, 1941. We need to rededicate ourselves to its best ideas; freedom, justice, tolerance, democracy, and human rights that individual nations pledge themselves to honor and uphold.

I was just seven years old, but some things are never forgotten. I had relatives interned by the Japs in Santo Tomas prison in Manila. My step-father flew B-24s out of Henderson Field on Guadalcanal. My father went ashore on D-Day.

I got guided tours of Midway and Wake in 1949 during refueling for our flight to Manila. War is indeed hell for those on the receiving end.

So pardon me while I shrug at the fact of "Made in America, tested in Japan." Kept my father and my step-father from being involved in further action...

I'm with you 100% Desertrat. Those who start wars deserve little pity until vanquished.

I was not quite 6 years old, and I heard that speech on radio. Since I was a farm lad, what it meant to me (and other farm boys and girls) was that my older brother and I would have to take the place of hired men and get the farm work done. So we did exactly that.

I was driving a tractor when I was 5 years old, and also was taught how to properly fire a rifle and hunt when I turned 6 years old. We needed the meat to eat.

Once a week, Saturday, we went to the movies, and a news reel, actual combat, was shown. We knew what was happening, and knew that winning was the most important thing in the world.

We children back then did lots of work in support of the war effort.

When I could, I spent time with my grandfather and grandmother in Sergeant Bluff, Iowa, next to the Sioux City Army Air Corps base. There was a community center which had been quickly converted to a "canteen" for the soldiers, and our soldiers were friendly to us children, being as most of them were what would be called "children" today. A good many were but 16 years old.

Yes, those of us of a certain age share those memories. Mine are of trains filled with soldiers coming and going to Fort Dix, NJ whenever I visited my Mom's folks.