The EPA Versus the USA 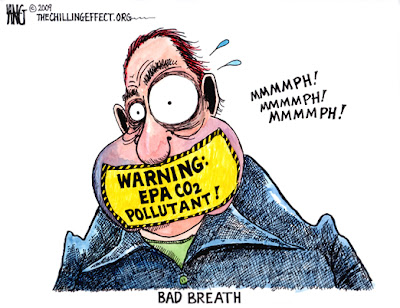 It seems almost beyond reason that a single U.S. agency could so hate America that it was prepared to ignore the Constitution, distort a Supreme Court decision, and impose its will on the nation in the name of totally discredited science.

That, however, is what the Environmental Protection Agency is seeking to do while Americans are distracted by the Christmas celebrations.

The agency’s objective is to regulate so-called greenhouse gases (GHG) on January 2, 2011. More specifically, it would regulate emissions from power plants and other large emitters, but in reality it would end the role of coal as the provider of 50% of the electricity Americans require.

It is essential to understand that the primary GHG is carbon dioxide (CO2) and it was this gas, naturally produced by the Earth and vital to all vegetation and life on Earth, that was falsely identified as the “cause” of “global warming.” Humans individually exhale some six pounds of CO2 every day.

First, there was no “global warming”; only the normal and natural warming that had been in effect since around 1850 when a 500-year “little ice age” ended in the northern hemisphere.

Second, the Earth is now in a normal and natural cooling cycle, though with the added concern that it is also at the end of an 11,500 year interglacial cycle between the last major ice age and the next.

Third, the data put forth by the UN Intergovernmental Panel on Climate Change has been almost entirely discredited, based as it was on rigged research by corrupted university centers and governmental agencies. Some people need to go to jail, but it is unlikely because the fraud was so vast in its extent.

On November 22nd, The Wall Street Journal published a lengthy editorial, “The EPA Permitorium” noting that “The scale of the EPA’s current assault is unprecedented, yet it has received almost no public scrutiny. Since Mr. Obama took office, the agency has proposed or finalized 29 major regulations and 172 major policy rules.”

It can be said that, in terms of its original mission, cleaning the nation’s air and water, that the EPA succeeded, but like any government agency, the EPA has also sought to constantly expand its powers and has, from its beginning, also seen as part of its mission the restriction of virtually all chemicals—invariably called toxic—with a particular emphasis on pesticides that protect human health and property.

The reason there is a nationwide infestation of bed bugs after a half century or more in which this insect had been virtually eliminated is that the EPA has restricted the use of almost every pesticide that might exterminate bed bugs. Now multiply that against EPA restrictions on a host of chemicals vital to the manufacture of thousands of products.

The effort of the EPA to regulate CO2 and other GHG gases has no basis in science and none in law. The Clean Air Act does not authorize it.

Moreover, by its own admission, restricting GHGs would only reduce global temperatures—if that were even possible—by 15 ten-thousandths of a degree Celsius in the next century.

The EPA has also proposed new rules calling for a reduction in the national ambient air-quality standard for ground-level ozone, a precursor of smog, from 75 parts per billion to between 60 and 70 parts per billion, a cut of up to 20%.

To most people that means nothing, but the reality is that hundreds of U.S. cities and counties don’t meet the current standard and compliance would destroy what is left of an ailing U.S. economy. If you think unemployment is bad now, it would increase as so-called “emitters” of GHG either undertook costly measures to reduce their emissions or just closed their doors.

Along with those who tried to impose a Cap-and-Trade Act on the nation in order to limit so-called GHGs and profit from it by creating a bogus exchange for the sale of “carbon credits”, the EPA is seeking to exercise a totalitarian control over every aspect of the provision and use of energy in America and it is all based on lies.

Congress can put an end to this nightmare by overturning the EPA’s “Endangerment Rule” and with it the GHG regulations. A new Congress can and should defund as much of the EPA as possible.

The use of fossil fuels---coal, oil, and natural gas---accounts for 85% of America’s energy sources. The EPA proposes to limit or end their use. As such it is an enemy of the people and Congress must act to stop this insane agency before it destroys the nation.

It is not only the US that is rapidly being destroyed by the followers of the eco-whacko religion, Alan, it is all of western cultures, and the oil producing nations will follow, with no market.

Any nation's economy is directly proportional to the amount of energy its citizens consume.

Japan is attempting to leave the economic sinking ship of eco-whacko controlled fools, but what was once a vibrant economy has already been given to China, and won't return.

If I were younger and Chinese, China is where I would be headed as of now.

Eco-whackos all loath humankind, and desire that more than 90% of humans die rapidly.

"Eco-whackos all loath humankind, and desire that more than 90% of humans die rapidly."

I agree with you there, they've even come right out and said that the planet would be better off without us.

I think they're half right. I think the planet would be better off without THEM. However, I have too strong of a conscience to do unto them as they would like to do unto me.

I applaud you, Alan, for your straight talk against the crooked politicians and the liar-scientists who promulgate this nonsense. I'm 76 and I will have on my tombstone, "CO2 is beneficial to life." Everything these amateurs do is designed to distort Free-market capitalism and strangle what makes America Strong.