No Peace for the Prince of Peace...Or Anyone Else 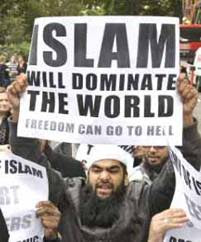 As Christians around the world prepare to celebrate the birth of Jesus, an apostle of love, the other two monotheistic religions view from the sidelines.

While Christians have nothing to fear from the tiny minority of Diaspora Jews and those in Israel, a very real threat exists from Islam.

Islam holds Christianity and Judaism in contempt, but because these two faiths have, as any Muslim will tell you, “a book”, they are spared an even worse judgment of Hinduism or Buddhism which do not have a central text around which their faiths revolve.

In this decade, in March 2001, the world witnessed the destruction of two ancient Buddhist statues, 114 feet high, carved out of a mountain at Bamiyan, Afghanistan. It signaled a new stage in an ancient war. It took place six months before the attack on the World Trade Center and Pentagon on 9/11.

The statue's destruction was ordered by the fanatical fundamentalist Taliban. How fanatic? They told the Shiite Muslim residents of Bamiyan that they could either convert to Sunni Islam or they would have to leave their homes. To those who fled, the destruction was an evil and repugnant act. The outcry worldwide was unanimous.

After 9/11, the American response was a military operation to drive the Taliban and al Qaeda out of Afghanistan. Afghanistan is ancient, invaded many times over the centuries, and its people still cling to their tribal ways. As in all guerrilla wars, the land belongs to the people who live there and foreign occupations won’t change much.

For Christians and Jews, the struggle against Islam has defined the last nearly 1,400 of the two thousand years that are measured from the birth of Jesus and establishment of Christianity.

Had Islam not been driven from Spain and stopped outside Vienna, there would have been no Europe, no Renaissance, no Enlightenment, and most surely no Western civilization. Christians and Jews would have been dhimmi, second class citizens in their own lands, forced to pay taxes and show their obedience to Muslim overlords.

Following 9/11, the invasion by America and forces from allied nations in Afghanistan and later Iraq are reflections of the Crusades sent to reclaim Jerusalem and Muslims know it. That it was occasioned by their own actions is immaterial to them. If Iran is ultimately attacked to destroy its nuclear facilities, it will claim it is the victim, not the aggressor.

The same need to destroy the Buddha statues in Bamiyan was the same need to build Al Aqsa, a huge mosque over the holiest place in Jerusalem for Jews, the Dome of the Rock sits atop the spot attributed to where God intervened to stay Abraham’s sacrifice of his son, Isaac. It was to signal an end to human sacrifice, to idolatry.

The same drive to conquest led to the proposal to build a mosque within sight of Ground Zero in New York, a triumphalism that ignores the feeling of Americans that the martyrdom of those who died there at the hands of Muslim terrorists imbues the site with a sacred memory. The contempt the mosque represents is palpable.

I think Americans sense that an ancient war, a religious war, continues in their time, but are loath to believe it even as we fight a hot war in Afghanistan or reduce our troop strength in Iraq. As a fighting force, we may not fully leave the Middle East for a very long time because, put simply, we dare not.

After clinging to a belief in tolerance, Europeans are stirring from their reluctance to confront Islam and beginning to draw lines between themselves and the many Muslims who moved there to find work, but who never assimilated as French, as German, as Dutch, as Swedish or as British. Europeans have slowly come to realize they have an enemy in their midst.

It is why travelers fear to board airlines at this time of year.

It is why British authorities just arrested jihadists planning attacks during the Christmas holiday.

It is why Christmas mass has been abandoned in Iraq this year because of countless assassinations of Christians. Many are now fleeing that nation.

It is why the U.S. Attorney General has warned that Americans “have to be prepared for bad news” if Muslim terrorists, domestic or foreign, are successful.

It is why Americans still wait to bring a U.S. major to trial for killing thirteen soldiers at Fort Hood.

It is why we detain jihadists in Guantanamo.

It is why Palestinians have spurned any overture of peace with the Israelis.

As Christians celebrate the birth of the Prince of Peace, they and others, Jews, Hindus, Buddhists, know there will be no peace so long as Islam makes war on all other faiths, not in the name of God, the universal Creator, but of a former Meccan moon deity named Allah.

Editor's Note: To see and hear the message of Islam, view this short video:
http://www.youtube.com/watch?v=dSftYIGH6-w&feature=player_embedded
Posted by Alan Caruba at 1:19 PM

Very compelling and timely Alan. I thought perhaps your readers might also like to view the best short documentary about Islam ever produced. Islam: What the West needs to know, "Here's Fitna!"
http://www.jihadwatch.org/2008/03/here-is-fitna.html

We Americans do everything wrong these days. And it is that "tolerance" nonsense. That and the foolishness that "new" ethnic groups should be welcomed here, and the mistaken belief that America has been a "melting pot" of nationalities. Never happened.

"New" ethnic groups were never welcomed here, but we did need their labor. Always, new immigrants lived in enclaves, but did have to find ways of making a living. Usually poor paying jobs, long hours, but at least in America they could make a meager living, which they couldn't where they were coming from. It wasn't until the second or (usually)third generation born in America when those of that generation began mixing socially. Coming to America meant opportunity, perhaps only for future generations, not instant prosperity.

The Mormons had to publicly change that part of their religion which allowed multiple wives before Utah (an enclave of Mormons) could become a state.

For Muslims to emigrate here, they should have to publicly renounce the religious concept that Islam should take over as a state religion by any means needed.

When Muslims here break American laws they should be tried and punished, just as Christians, Jews and those of other religious persuasions are. It is up to them to live in accordance with American laws, and embrace our culture, not we embrace or adopt their laws and customs.

Concepts of the liberal intelligentsia never have worked in the past, so there is no reason to think that those concepts will work in the future.