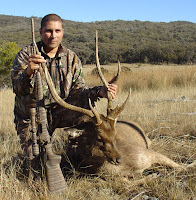 Here's a news item from the editor of The Tribune, a weekly newspaper published in North Carolina.

The state of Wisconsin has gone an entire deer hunting season without someone getting killed. That's great. There were over 600,000 hunters. Allow me to restate that number. Over the last two months, the eighth largest army in the world -- more men under arms than Iran ; more than France and Germany combined -- deployed to the woods of a single American state to help keep the deer menace at bay. But that pales in comparison to the 750,000 who are in the woods of Pennsylvania this week. Michigan 's 700,000 hunters have now returned home. Toss in a quarter million hunters in West Virginia  and it is literally the case that the hunters of those four states alone would comprise the largest army in the world. America will forever be safe from foreign invasion of troops with that kind of home-grown firepower.

Hunting - it's not just a way to fill the freezer. It's a matter of national security!
Posted by Alan Caruba at 5:37 PM

Thank you Mr Caruba!
That's the best news I've heard in a while..

Very interesting essay... thanks for the insight...

Great post. We all need to be vigilant and keep a close watch for any attempt to infringe on our right to bear arms. It's looking like it's about the only thing we have left between freedom and total tyranny ...

Based on recent statements, Eric Holder and the rest of the Obama administration clearly view Americans who exercise their right to keep and bear arms as a serious threat. Turning a blind eye to that fact would be foolish.

And if ANY of those hunters want to send me some ground deer meat, I will make an awesome DEER CHILI!

"free from foreign invasion"? Mmmh, not so sure. Look at whom is currently occupying the White House!!

I fear that soon we will be seeing numerous enforcement agencies in the USA wearing the black ski masks, to protect the identity of their international U.N. and NATO troops that will be used against us.
but rest assured that...
Hunters, Sovereign Patriots, Natural Rights, Common Sense, Human Nature, Freewill, and even Animal instincts are all coming together to prevent and destroy the Corporate controled, Globalist, Socialist take over of all the worlds resources !!!. We are not government or U.N. Property !!!, and we will not be controled as such !!!.

Hunters are the Armed Forces of the Second American Revolution.

I haven't hunted in a long time, but I still have the means right at hand.