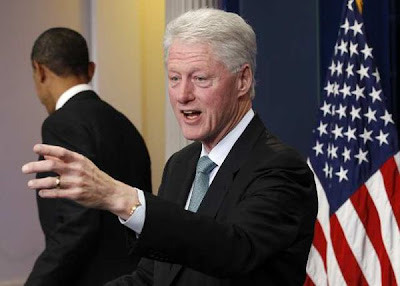 If ever a president looked impotent and helpless, it was during the press conference hastily called to secure a former president’s aid to pass the extension of the Bush era tax rates.

It was the image of a former “community organizer” unable to organize even the support of his own political party.

We are witnessing the shrinking presidency of Barack Obama.

When Obama excused himself to attend a family Christmas party, leaving the podium to Bill Clinton, he demonstrated the futility of his efforts to divide Americans along class lines of rich and poor.

Obama has never understood that the American dream is that anyone can get rich thanks to hard work and the opportunities provided by capitalism. Over the past two years it has become obvious to everyone he has been engaged in an effort to destroy the nation through an obscene increase in its debt and the deprivation of its own sources of energy.

The bill to extend the tax rates, in place now for a decade, has been encumbered by the usual “earmarks” that have turned it into a Christmas tree of pet projects by the same Congress whose two previous stimulus bills failed to increase employment and which continues to spend the nation into bankruptcy.

The best thing now is to let the bill die and to wait until a new Republican-controlled House of Representatives can extend the tax rates and rid the present bill off even more deficit spending. Congress has not demonstrated the ability to do the best thing or even the most sensible thing.

The most articulate advocate of rejecting this “compromise” bill has been Senator Jim DeMint (R-SC), chairman of the Senate Conservatives Fund, a political action committee dedicated to electing true conservatives to the U.S. Senate.

In a statement by Sen. DeMint, he reflected the expectations and wishes of all taxpayers having been fighting for years to extend the tax rates. “It’s the people’s money and we should not raise taxes on hardworking American families.”

The compromise that the Republican leadership in Congress agreed to was dismissed by President Obama even as he grudgingly tried to get his own party to support it. It has not been the GOP that has held Americans “hostage” as they waited for action on the tax rates, but the White House and the Democrat Party.

Sen. DeMint noted that “it includes approximately $200 billion in new deficit spending and stimulus gimmicks. That’s a lot of money that will have to be borrowed from China and repaid by our children and grandchildren.”

“If we are going to increase spending on new programs, we must reduce other spending to pay for it.”

Perhaps the worst aspect of the bill is that it extends rates for only two years. “We don’t have a temporary economy so we shouldn’t have temporary tax rates.” As this is written, trillions are sitting idle in American corporations and businesses because they are unable to plan ahead to make new investments and hire new employees. A two year extension is futile because businesses must make long-range plans and investments.

Another noxious aspect of the bill is its failure to extend all of the tax rates. “It actually increases the death tax from the current rate of zero percent all the way up to 36 percent. One economic study shows that this tax increase alone will kill over 800,000 jobs over the next ten years.”

It will also destroy the ability of countless small farmers to pass on their legacy of hard work to their families who will, in many cases, have to sell their farms whose wealth is measured in the land they own, not the money they possess.

“I appreciate the efforts made by my party’s leaders to negotiate this deal, but I believe Americans deserve much better.”

The November elections that demonstrated the greatest transfer of power in the House and to some degree the Senate since the late 1940s are ample proof that Americans want and expect better results.

Starting on January 2, 2011 a new Congress could attend to the proper and sensible extension of the Bush era tax rates. Those who know how the Congress functions, however, warn that it would take three to six months to achieve this. The further stagnation of the economy would continue during that time.

And the Dems are saying it's all a part of the plan, that Obama is only doing what many other presidents have done, he's calling in *THE BIG GUNS* to help him out..

Seriously, I don't remember ANY president calling in his predecessor and turning the mess over to him...

@Fred: When Obama leaves office in two years, he is going to be one bitter SOP.

DeMint has it absolutely right. This bill is garbage, and if it's allowed to pass, I fear we have nothing but years of business as usual to look forward to out of this Congress ...