Is Anything Secret Anymore? Depends on Whose Secrets! 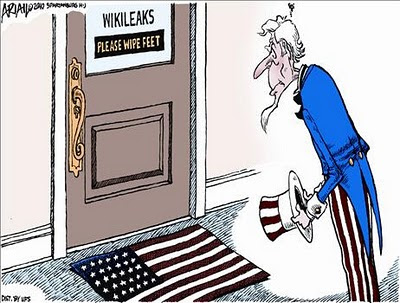 The one thing that the pundicracy---the columnists, former government and other folk who express themselves in print and broadcast media---have missed about the latest WikiLeaks outrage is that, like the earlier one regarding Afghan military operations, both have been directed solely at the United States of America.

Are we really surprised that the Saudis want the United States to bomb the hell out of Iran’s nuclear facilities? Is it some kind of revelation that many leaders of many nations cordially dislike one another?

After growing tired of paying bribes to the Barbary pirates, Thomas Jefferson commissioned our first naval warships and sent in the U.S. Marines. Today we have two carrier groups off the coast of North and South Korea. As the French say, plus ça change, plus c'est la même chose—the more things change, the more they stay the same.

It is instructive that Julian Assange, the face for WikiLeaks, has not hacked into and exposed the secret files of Russia, China, North Korea, or comparable nations that are unfriendly to American interests and policies.

The reason, simply stated, is that Assange knows we would be talking about him in the past tense if he had.


We have been told that these revelations have materially affected our relations with other nations, but it would be a good idea to keep in mind that they, too, have their phalanxes of spies and analysts who examine everything that is said and done by America, diplomatically, militarily, economically, and politically.

They are the counterparts of our Central Intelligence Agency that essentially does the same thing. These functions are also carried out by the Pentagon and the Department of State. Intelligence is the currency of national survival. Other U.S. agencies keep track of crop statistics, maritime activity, and just about anything and everything else that can be measured.

That said, we were absolutely astonished to learn that North Korea was so advanced in its production of nuclear weapons and missiles. We had no idea that Saddam Hussein had not stockpiled weapons of mass destruction, despite widely believed, but flawed intelligence. Et cetera. Et cetera.

The great revelation of 9/11 was that the U.S. generated tons of intelligence, much of which was, in spycraft terminology, “stove piped”; isolated within an agency and not shared. In the effort to make that intelligence more available to more people within our vast government, WikiLeaks found a way into it.

One of those ways was an openly gay Private First Class in the U.S. Army who, in less politically correct times, would never had been inducted or permitted to serve.

All intelligence is vulnerable to spies and turncoats. When it is stored digitally, it becomes even more vulnerable and that is the downside of the most extraordinary technology ever invented by man.

It is one thing to deliberately hack into it—something the People’s Republic of China, the Russians, and others try to do on a daily basis—but it is quite another to make it available to anyone who wants to look at it and I do mean anyone.

All of which brings us back to Julian Assange, a rather pathetic individual who would otherwise be ignored except for his “talent” for hacking other people’s computer data. Somewhere along the way Julian developed a deep animus for the United States of America.

No doubt he and others see America as the modern version of the Roman Empire, but Julian is likely unaware of the success of the Roman Empire, a republic that lasted some five hundred years. Indeed, Romans were always reluctant to go to war unless either attacked or, as was frequently the case, invited to offer the protection of Pax Romana.

There is only one nation on planet Earth to which small nations and large can turn for protection against the aggression, real or anticipated, of the current rogue’s gallery of despots and lunatics that threaten peace in the Middle East, those nations on the Red Sea and the Persian Gulf, nations bordering the Sea of Japan, and the Somali Peninsula, to name just a few places.

When and if the Swedes get through prosecuting Julian for alleged sexual crimes, the United States should reach out and bring him here for the crime of espionage. After which he should be subjected to a firing squad as an object lesson to others.

The most curious aspect of the WikiLeaks crimes is the failure of the Obama administration’s Department of Justice to take any action whatsoever. We are either witnessing that most inept DOJ in the history of the nation or one shot through with people who might actually sympathize with Julian Assange.

Labels: US government, US Military, WikiLeaks

An Adult Administration would have sent special ops against Wikileaks long before the first document dump and placed dear Julian the cage with the rest of the terrorists at GITMO.

NOTE TO "EM"
Stop trying to comment on my blog. The reason is because it is MY blog and I don't agree with you or appreciate your snide comments. I see no reason in posting your views. Get your own blog. And go away. -- Alan C.

Wikileaks don't "hack" people's computers: they publish leaked data that they are sent.

Wikileaks have published leaks concerning many other nations, including Somalia, the Cayman Islands, the UK and the Ivory Coast. In fact the first leak Wikileaks published concerned Sheikh Hassan Dahir Aweys of Somalia.

Last month Assange said "The Kremlin had better brace itself for a coming wave of WikiLeaks disclosures about Russia."

Any curiosity over the failure of the DOJ to act can be assuaged by reading the First Amendment or the decision in New York Times Co. v. United States, 403 U.S. 713 (1971).

@Chippy:
Thank you for the clarification. Once again it would appear that I have been misled by the mainstream media's reporting.

However, I do not believe the First Amendment applies to an act of espionage, though some might argue that it does.