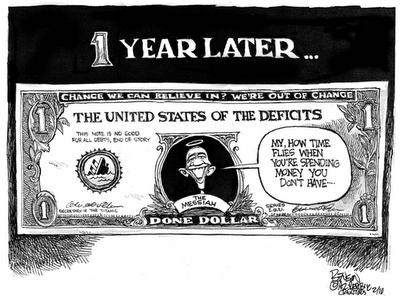 If Ronald Reagan was the "great communicator", then surely Barack Obama is the Great Bloviator.

We have reached the unhappy point in his first term when virtually everything he said to get elected and everything he’s said since being elected is either a lie or of such dubious merit as to be easily dismissed.

Consider his 2008 promise to go through the federal budget “line by line” to eliminate waste. At this point his administration has not produced a budget for the fiscal year. Even so it is unlikely he would find any element of any budget merits a reduction. This man is all about spending.

Watching him grandstand on Friday, Jan 7th, concerning the Bureau of Labor and Statistics announcement that the U.S. economy added 103,000 jobs in December and that the unemployment rate had dropped from 9.8% to 9.4%, I was happy that the Heritage Foundation’s “Morning Bell” analysis pointed out that that we are in the twentieth month in which the unemployment rate is over 9%, a post-World War II record.

Let us pause now while everyone at the White House says in unison, “It’s Bush’s fault!”

The Democrat Party is bleeding members, particularly white ones. I wonder why? Maybe it’s because from early 2007 through the end of 2010 when they had strong majorities in both houses of Congress, they did not do so well in comparison to when Republicans were in charge from 2003 to 2006.

In an American Thinker article by Yossi Gestetner, he noted that by comparison, under the Democrats 1,583,000 jobs were lost whereas, under Republicans1,672,000 were added.

This isn’t rocket science. The numbers tell you everything you need to know, but listening to Obama’s numbers as he does another “photo op” can be as mentally destabilizing as his economic policies have been on the economy.

He just waved goodbye to his first team of economic advisors and everyone in the business community is praying that their replacements are not aliens from outer space.

You want to know what socialism looks like? Let’s just take tax rates as a measurement.

Bear in mind, we all had to suffer through a down-to-the-wire “compromise” to get Obama to go along with merely extending the Bush tax rates.

When you add income tax rates and value-added taxes that all Europeans must also pay whenever they purchase anything, it looks like this:

Suffice to say, I will not be moving to Denmark any time soon!

Under socialism, Europeans pretty much work for their government, giving up the majority of their earnings to taxation.

As Obama begins the final two years of his first—and hopefully last term—a December Bloomberg National Poll survey indicated that “more than 50 percent of Americans say they are worse off now than they were two years ago when President Obama took office, and two-thirds believe the country is heading in the wrong direction.” It was noteworthy that “The pessimism cuts across political parties and age groups, and is common to both sexes.”

Here’s a prediction, Democrats in Congress will fight any and all Republican efforts to get the budget under control before the nation goes belly-up. Why? Because they're socialists!

Oh-oh, I think I hear Obama about to give another TelePrompter-perfect speech on how great things are. Excuse me while I reach for the remote and hit the mute button.

Truth is, the SOB isn't worth a bucket of pee...

Too bad the remote doesn't have a "delete" button...
Americans voted for him as if they were participating in an American Idol contest. 50 years of lousy socialist public education and lousy socialist mainstream pravda, eh, media.
Eddy

@Don. Thanks. All writers enjoy hearing that.

I have to pull you up on those UK tax rates. Income tax rates start at 20%.
The 50% rate only kicks in when you are earning over $225,000, and then is only levied on the amount you earn over that figure.
VAT rates are 20%
However, when I was earning about $45,000 dollars a year, I paid a third of my earnings in tax without even counting VAT. That hurts.And all I got was this lousy Iraq War!