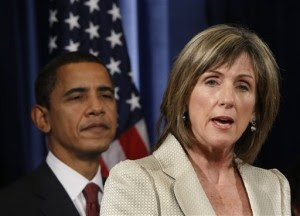 The announced departure of Carol Browner as President Obama’s climate “czar” is very good news for America, given her long record of contempt for the truth regarding “global warming” and a range of other Environmental Protection Agency initiatives when she served as former President Clinton’s director of the EPA.

The decision to leave could have been motivated to put some distance between herself and the White House to afford the President some political cover.

Whatever reason will be put forth for her leaving, the real reason is her justified concern that she will be summoned before a congressional committee to explain why, for example, she deliberately misled Americans during the BP oil spill, going on national television to say that most of the oil was gone. She cited a White House commission created to investigate the spill, implying that the scientist’s report had confirmed the need for a moratorium on oil drilling in the Gulf when, in fact, they had not supported it.

Browner has been a dedicated socialist, serving as a Commissioner of the Socialist International, an umbrella group for 170 “social democratic, socialist, and labor parties” in 55 nations. According to its “organizing document”, the SI cites capitalism as the cause of “devastating crisis”, “mass unemployment”, “imperialist expansion” and “colonial exploitation” worldwide. This is straight out of the Communist Manifesto.

When her role with SI was revealed, its website scrubbed her photo and evidence of her commission membership. No doubt several of Obama’s “czars” have shared similar views of capitalism. One, Van Jones, was forced to resign as the "Green Jobs Czar" when it was revealed he was a communist.

Obama’s election was, in effect, a socialist takeover of the executive branch of the U.S. government.

Browner’s dedication to the Big Lie of “global warming” goes back to her days when she served as then-Senator Al Gore’s legislative director from 1988 to 1988. Browner’s devotion to environmentalism resulted in her being named Florida’s Secretary of Environmental Regulation from 1991 to 1993. After the 1992 presidential election, she served as a transition director for Vice President-elect Gore.

Global warming is the assertion that the Earth is rapidly warming as the result of the buildup of “greenhouse gases”, most particularly carbon dioxide.

The “theory” is now totally discredited, but continues as justification for a variety of policies such as the administration’s emphasis on wind and solar energy, attacks on the coal and oil industries, and efforts that would drive up the cost of electricity to business, industry, and all consumers.

Browner is on record saying that global warming is “the greatest challenge ever faced” despite revelations in 2009 that the UN’s Intergovernmental Panel on Climate Change had rigged the computer model's global temperature records to advance the fraud.

Global warming is the basis for the Cap-and-Trade legislation that was stalled in the Senate during the first half of Obama’s term. Since then, the EPA under Lisa Jackson, a Browner acolyte, has asserted that it intends to regulate CO2 and other greenhouse gases. The EPA has no such authority under the Clean Air Act. Such regulations would have a devastating affect on the nation’s economy.

In December 1992, President-elect Bill Clinton named Browner as his choice to head the Environmental Protection Agency and she was confirmed by the Senate on January 21, 1993. She would become the longest-serving EPA director.

Despite a J.D. degree from the University of Florida College of Law in 1979, Browner has frequently shown a contempt for the law. In 1995, she used her position at the EPA to lobby more than a hundred grassroots environmental groups to oppose the Republican-led Congress’s regulatory initiatives to curb the EPA. In doing so, she violated the Anti-Lobbying Act. The Browner-led EPA was strongly rebuked by a bipartisan subcommittee of the House Government Reform and Oversight Committee.

On her last day as EPA Director, Browner ordered a computer technician to delete all her computer files despite a federal judge’s order requiring the agency to preserve those files. It was later learned that three other high-ranking EPA officials had also violated the judge’s order. U.S. District Judge Royce Lamberth held the EPA in contempt of Congress in 2001.

During secret negotiations with auto industry executives on behalf of the Obama administration, Browner directed them “to put nothing in writing” as she orchestrated an agreement to increase federal Corporate Average Fuel Economy (CAFÉ) standards. Federal law requires officials to preserve documents concerning significant policy decisions.

In these and countless other unknown ways, Carol Browner has used the reins of power as EPA Director and later as President Obama’s climate advisor to assert EPA and government control over every aspect of the lives of Americans, limiting their choices, and in the process harming the nation’s economy.

Until the nation is released from the grip of such environmental/socialist zealots, its future remains in jeopardy.

The biggest problem I have with these issues is simple. Once Browner (or anyone else in such a position), has been proven to be a lawbreaker why should she not go to jail,and be barred from any elected office or governmental position for life? These outrages will continue until very real and certain penalties are attached to such behavior

I see by the remarks here some of you have been missing the Daily Socialist Brain Washing Session!

"Anything a socialist does to advance the cause of socialism is legal."

"The ends justify the means."