Who the Hell is Reince Priebus? 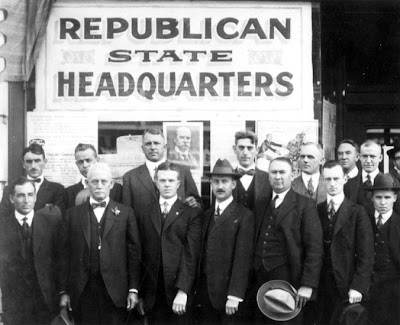 Okay, we have had two years of the token black man as the chairman of the Republican National Committee and it’s goodbye Michael Steele. Thanks for whatever, but the party’s broke and still has to raise a ton of cash for the 2012 elections. Bring in the white guy, Reince Priebus.

Reince Priebus? Who the hell is Reince Priebus? Well, for one thing he is the new RNC chairman. A former GOP leader in Wisconsin where the citizens were so totally fed up with the Democrats they voted in a score of Republicans. Priebus could and did take credit for it. Some say it was largely the Tea Party movement in Wisconsin that was responsible, but a win is a win.

Inside the Beltway Priebus is referred to as a “nuts and bolts” guy, another way of saying his job is to raise the money the RNC needs. Given that the Democrat candidate in 2012 will be Barack Hussein Obama that is not likely to be a problem.

I just sent the Republican National Committee my annual $25 contribution and my reward to be to get a call every two weeks for the rest of the year from the RNC asking for more. Believe it or not, I actually stop being unbelievably polite after the seventh or eighth call. No, really.

Of course, it is hardly my contribution that matters at this point. The real question is whether Wall Street will embrace the Republican Party and start backing whoever emerges as the GOP presidential candidate, along with the others.

As far as Wall Street is concerned it’s all about “access” to whoever might win and, aside from disliking Obama even more than he dislikes them, Wall Street has examined the tea (party) leaves and concluded Obama is, as the kids say, so over.

Beyond the money crowd there’s the business crowd and they have zero reason to back Obama unless they are solar panel and wind turbine manufacturers. Corporate America, with the exception of General Electric, is just sick of Obama and all the uncertainty he has created for them.

Obama and the Democrats have only two constituencies on which they can depend in 2012. One is the unions and the other is Afro-Americans. The Dems have a solid lock on the 25% to 30% of Americans who are so liberal they wish Obama, in addition to being black, was gay, a cross-dresser, trans-gendered, and a card-carrying member of the Communist Party of the USA.

Back to Priebus; in addition to having to raise a boatload of cash for the GOP, he has to worry about who gets selected to be its 2012 presidential candidate. His job is to remain neutral, but I’m betting he’s hoping it’s not the Great Straddler, Mitt Romney, capable of bestriding both sides of any issue.

The other reoccurring nightmare for Priebus is Sarah Palin. The Momma Grizzly says the right things for meat-eating, gun-shooting, fish-clubbing Republicans most of the time, but she would never get elected President.

Americans have tried electing a “novelty” with Obama and now they want a nice, old white man, but not too old as in John McCain. McCain spent so much time “crossing the aisle” they never knew where to seat him during a State of the Union speech.

There are, at this point, just way too many Republicans who want to be President and we shall have to wait for one of them to catch fire and ignite Republican passions.

In the end, it will be INDEPENDENTS who will defeat Obama in 2012 and elect, well, someone-anyone else.

I suppose, at this point, it doesn’t matter who Reince Priebus is unless he turns out to be as prone to making goofy public gaffs as the departing Michael Steele. If he does, all bets are off.

What's in a name? This Wisconsin guy, Reince Priebus, may have a very strange sounding name, and look slight and geeky, but if he assumed a Bronx accent, he could have name identification such as show host, Regis Francis Xavier Philbin. The latter has been in front of TV camera nearly since they were invented. Alan accurately says that it will be Indepentents who elect our next president.