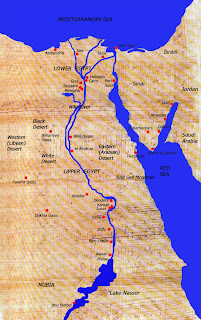 Those of us around at the time of the 1979 Iranian student revolution that deposed the shah are having strong feelings of déjà vu because that uprising was swiftly co-opted by Ayatollah Khomeini who hated the Great Satan, America, as much as he hated the Little Satan, Israel.

The U.S. lost a major ally in the Middle East. The Shah may have been a bastard, but he was our bastard. The CIA had put him on the Peacock Throne.

The uprising in Egypt, if taken over by the Muslim Brotherhood, will severely endanger American interests that have largely been coasting along in the belief that Egypt’s President Hosni Mubarak would engineer a smooth transition of power to his son. This was the scenario in Syria when its dictator, Hafiz al-Assad, passed away.

That scenario just went out the window. Given the depth of opposition to Mubarak, it is unlikely power would pass to his son, Jamal who, with his wife and daughter have fled to Great Britain. Moreover, since Mubarak has no vice president, there is a major power vacuum.

The fate of the Suez Canal is the biggest geopolitical concern at this point. A lot of oil transits through it in much the same way it does through the Strait of Harmuz. Years of growing dependency on Middle East oil while our own vast reserves were locked up and neglected will demonstrate why the policies of several administrations have been not just short-sighted, but incredibly stupid.

As big a pain as Saddam Hussein was, I always believed that he was overthrown as much because of his control of Iraqi oil as for any other reason. The U.S. backed his war on Iran until it fizzled after eight years. When he invaded Kuwait, we pushed him back into Iraq. After 9/11 it is likely that the calculation was made that Iraq and the Middle East would be better off without him. His overthrow might also been seen as an object lesson to others in the region of what happens when Uncle Sam is unhappy.

Mubarak has been “our man” in Egypt since he took over after the assassination in 1981 of Anwar Sadat who had been killed because he made peace overtures to Israel. Up to then, Egypt had been repeatedly defeated, especially in the Six Day War. After thirty years of dictatorship Mubarak is hated by most Egyptians for all the usual reasons.

To understand the current unrest in Egypt and elsewhere, it is necessary to understand that most of the population of the Middle East and northern Africa’s Maghreb are young people. They are fed up with the oppression of their governments, with unemployment, with inflation, with the region’s endemic and historic corruption, and its lack of political freedom.

They rioted in Lebanon against Syrian oppression after the assassination of their prime minister. They rioted recently against Hezbollah control of Lebanon. Within the past weeks, there have been riots in Tunisia, in Yemen, and now Egypt. It is a contagion.

We are running out of friends in the Middle East. For all of the talk of supporting freedom in the Middle East, the U.S. has usually backed its despots. Given our dependency on Middle East oil, we have had very little choice. That’s what happens when you don’t allow drilling in Alaska’s ANWR, anywhere off our coastlines or domestically where billions of barrels are estimated to exist.

Now, however, we have a President who is VERY different from any that came before him going all the way back to Truman and Eisenhower.

A neophyte when it comes to foreign affairs, no matter what nation is involved, Obama has demonstrated extraordinarily bad instincts and judgment. He has regarded the United States as just one nation among others. He has apologized for the sixty years of relative peace the U.S. has provided as global sheriff. He has been eager to “reach out” to Middle Eastern nations. The result is that Obama has appeared weak to everyone.

He failed to speak out strongly in June 2009 when ordinary Iranians filled Tehran’s streets to protest the despicable and detested ayatollahs that rigged its election in favor of Mamoud Ahmadinejad. He lost a major opportunity while saying at the time that he did not want to “meddle” in Iran’s affairs.

Although he increased combat strength and supported Afghanistan’s Hamid Karzai, the results there have been a predictable failure for a regime that lacks popular support.

Ironically, the only actual and natural ally the U.S. has in the Middle East, Israel, has been beaten about with Obama’s absurd demands that it not construct new housing in its own capitol, Jerusalem.

In the first two years of Obama’s presidency, it has become obvious to everyone, friend and foe alike, that he is anti-Israel. Perhaps he was trying to signal some kind of accommodation with Iran? Or maybe he just doesn’t like a Jewish presence in the Islamic Middle East?

That is why the rumor that the U.S. will not veto yet another anti-Israel resolution in the UN Security Council worries a lot of people. Failure to do so would make Obama the first U.S. President ever to abandon Israel in the UN.

Throughout the Middle East, people risking their lives for freedom know that if the U.S. abandons Israel, it will abandon them.

That is why, also, there can be no accommodation with Iran. Every other nation in the Middle East knows this. Hezbollah and Hamas are both terrorist organizations and both are funded and directed by Iran. It is the single greatest threat to peace in the Middle East. Syria is Iran’s closest ally and agent.

By contrast, Jordan, Saudi Arabia and the Gulf States, all monarchies, all protected by the U.S., fear Iran.

No Middle Eastern nation is safe so long as radical Shia Islam is directed from Tehran and operates with impunity in Yemen and in Pakistan.

No nation in the world is safe if Iran acquires nuclear weapons.

If Egypt is lost to the Muslim Brotherhood as the result of the current insurrection and rebellion, the implications for the U.S. and the world would be a major game change.

A lot of nations who found it fashionable to oppose and criticize the U.S. as a big military bully are going to be looking to it to avoid an ugly, expensive, and dangerous future.

On Friday, the White House released a statement that was made in Platitude Heaven:

Politico.com reported that “President Obama called for Egypt's government to respect the rights of its people. ‘The people of Egypt have rights that are universal,’ he said.”

“Calling for Egyptian authorities to respect citizen’s right to speech and protest, he said, ‘suppressing ideas never succeeds in making them go away.’ The president also urged the people of Egypt to refrain from violent protest. Obama spoke with Egyptian President Hosni Mubarak for 30 minutes earlier Friday.”

The problem, of course, is that we have a President who is intellectually, emotionally, philosophically, and in all other ways not up to this crisis.

when will he accept the wishes
of the american people ?

I would only note there is another rebellion waiting loudly in the wings - The Second American Revolution that is taking shape before our eyes for many of the same reasons you cited for the Egyptian revolt including millions of well educated students with no future due to economic conditions authored by the Powers That Be.

Hence, I were a member of the Leftist ruling class in this country, I would be very afraid of instant revolution by Twitter and the Internet.

@elmerbittlinger. What or which declaration are you referring to?

As to the wishes of the American people, I doubt he care that much.

Could all the turmoil we are seeing in Muslim countries be an offshoot of perceived weakness on the part of the United States and her allies! I for one have always felt this President is firmly on the side of the Muslim world as a whole. Certainly he is the most antagonistic President as in his stance on Israel I have ever seen. As we now are at the point in which we have our elected officials telling the Muslim world this country is full of racist hate and an administration that in almost every stance is extremely ” Anti-American ideals” why should one be surprised that these radical Muslim Fundamentalists are taking their shots now? After all, the administration only yesterday as an example declared the Egyptian government was stable. No surprise from the blind mice running the show in D.C. now is it?

@joetote. I suspect these demonstrations are the result of years and years of pent-up anger against the Mubarak rule. Thanks to television, the Internet, etc., more people are able to see what life is like here and elsewhere. This is a genuine people's revolution. What direction it will take, no one knows at this point.

Now can we say that Sarah Palin is right about "drill baby drill" ? Depending on the Middle East loons for oil has been a mistake from day one.
The people in those regions are as volatile and violent as the cult they belong to.

Polish, Czech and German TV (the 3 I am able to watch in their original language)all are trumpeting surprise and awe about the USA stand on the Egypt issue...they are stressing the importance and delicate balance adding quickly anticipated Obama's resolve as an inexperienced leader...
@Mr Caruba,
I would tend to agree with you...but can not help thinking about some politician years ago...maybe even Churchill said something like:
nothing in politics is happening as a result of coincidence....

somehow the timing of all events is bugging me...
I just don't have a good feeling about any of it...

Déjà vu all over again...

They say that GREAT minds think alike, I'm not sure where that leave US Alan, but our recent posts are eerily similar.

History is Repeating Itself in Islamic Nations

@Joanna: The turmoil in the streets was spontaneous, based on an incident a few days ago, but the anger behind it has been building for years, if not decades. Egyptians are really angry at Mubarak and his government. So I doubt that the timing reflects anything more than this.

@TexasFred: I have talked to a local gypsy and she says you're channeling my aura while I am asleep and stealing all my brilliant ideas!

Food prices all over the world have risen sharply, to the point that the masses simply can not afford to buy food.

Of course there will be widespread revolutions. Famine always brings revolution and war.

Coming to a venue near you soon indeed.