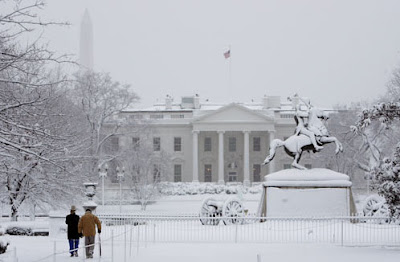 For New Yorkers and those in my part of New Jersey across the river, snow has fallen eight times since December 14, an average of once every five days, 56.1 inches in Central Park as of Jan 27th, and people are, shall we say, taking notice?

Along with the snow come power outages, disrupted bus schedules, air travel delays, commuting by car becomes an auto body repair business bonanza, schools shut their doors, and some people die from weather-related accidents or just from trying to shovel the snow from the driveway.

Having battled the “global warming” hoax since it was first perpetrated in the late 1980s, I have had the good fortune to make friends with many of the world’s top meteorologists and climatologists who joined in the long effort to educate people to the fact that there never was a rapid rise in the planet’s overall temperatures.

Even so, some mainstream media news outlets have continued to file stories incredulously blaming the winter snow storms on “global warming.” The hoax for too many media folk has long since become a religion in which blind faith replaces the objective fact obvious to everyone. It is cold. There is snow. Lots of it.

Indeed, the Earth has been in a cooling cycle since around 1998 as verified by meteorological satellite and other data. Piers Corbyn, an astrophysicist and leading forecaster, said “We’re now headed for a Maunder minimum of very low solar activity. The globe will be much cooler until about 2035, so there will be a lot more of these cold winters in Europe and the USA.”

Considering how the climatologists and meteorologists of the United Nations Intergovernmental Panel on Climate Change have been telling everyone for decades of a coming warming, why should we believe Corbyn and others predicting decades of cold weather? Corbyn studies solar cycles and they determine how warm or cold the Earth is.

Corbyn’s astonishing record of accuracy has put his native England’s meteorological service to shame for deliberately misleading the British to believe the “global warming” hoax. Not given to vague talk, Corbyn recently said, “The claim that 2010 is the second warmest year on record is delusional, irrelevant and disingenuous. Warmist (warm is cold) explanations for extreme events are as useless as saying ‘Wet days cause rain.’”

It is useful to keep in mind that U.S. agencies such as NASA and NOAA have been issuing similar politically correct and meteorologically incorrect “global warming” claims for years.

Consider weather events just since the beginning of the year.

For the first time since 1945, the maximum daytime temperature in North Korea has remained below zero for nearly a month. In neighboring China, the snowfall in northwest China was accompanied by extreme cold and a snowfall that flattened or damaged 100,000 homes. All around the world there have been similar reports, including sunny Italy that set new cold records, -48.3 degrees on January 19.

In the United States, Minnesota shattered its cold records on January 21 reaching an astonishing -46 degrees. In Florida, eight new record lows were set by January 17 and there was snow in every State of the lower 48. And spring will not debut until March 21!

It’s not like this is a new weather phenomenon. As any meteorologist will tell you, the Earth has gone through numerous warming and cooling cycles. In its 4.5 billion years, scientists estimate there have been at least seventeen full-blown Great Ice Ages. In near past history, the last Little Ice Age is well documented, having begun around 1300 and not ended until 1850. Whatever warming occurred since then, however, has amounted to just over one degree, but that was enough!

Reaching its peak in the 17th century, in England the Thames River froze over. The Little Ice Age is credited with bringing down the French monarchy and ruining Napoleon’s subsequent Russia campaign. In America, the tiny army of George Washington weathered a harsh winter at Valley Forge.

As in previous cooling cycles, it was low solar activity that determined the temperature, not carbon dioxide or other so-called greenhouse gases.

People’s lives depend on our government’s ability to measure and forecast the weather. A government that continues to tell people that “global warming” is real and then throws billions of money on “research” to prove it, while issuing utterly false claims, must be forced to acknowledge reality. The same applies to the energy policies on which everyone depends for electricity, a reliable supply of heating oil, and other elements of the infrastructure.

The lies must end. The end of the cooling cycle is nowhere in sight.

You are are right about "it's the sun", but it is even worse than that, Alan.

To add to our woes, the prices of foodstuffs are rapidly increasing throughout the world due to many reasons.

The prospects for a good harvest this next year are not looking good, and there is a good probability that great famines around the world will occur this coming year, which will destabilize many governments.

@Larry. You are right, too, but there is just so much one can cram into a commentary without losing the reader at some point.

I have been watching the increase in volcanic activity worldwide (big one just blew in Japan) and will likely write about this at some point.

Unlike yourself, I doubt that most Americans and others around the world realize what lays ahead.

"Unlike yourself, I doubt that most Americans and others around the world realize what lays ahead."

You, me and Larry know the shape of things to come because we think outside the box.

Unfortunately we are voices crying in the wilderness.

@Ronbo: I don't know about you guys, but this one is read on a lot of websites/blogs around the world...so maybe someone out there is getting the message...I hope!

Here in Sri Lanka, we've had the lowest recorded temperatures since 1955. Colombo 18C, Batticaloa 16C (at sea level) and Nuwara Eliya 07C (at 1780m above sea level). This might not be much for those in far North, but this is quite cold for a country just 07 degrees North of the equator. We also had the worst floods since 1957, displacing 900,000 people, destroying much of the rice harvest and breaching bunds of 400 irrigation reservoirs. The flood was such that an elephant calf was found dead on a tree 15feet above ground!

@Ravana. Thank you for your feedback on the weather in Sri Lanka. I must admit it took me by surprise, but it supports the view that the entire planet is cooling and is likely to do so for a long time to come. Let's hope it does not tip into a new Ice Age.

Dealing with the science is all well and good but the battle that needs to be fought is over the power and control that AGW was intended to confer on its proponents. We can talk science until we're blue in the face but it will make no difference.
Remember your Alinsky. "The "issue" is never the issue. The "issue" is always power and control."

@Choey. If the Nov 2010 elections were any indication, the power has shifted away from the Democrats.

What the Tea Party and GOP do now is critical. That is why the first House vote was to repeal Obamacare. Symbolic, yes. But important, too.

In other news, the UN's World Meteorological Organization has announced that it was once again the hottest year ever (http://www.theaustralian.com.au/national-affairs/climate/earth-posts-hottest-year-as-rain-cools/story-e6frg6xf-1225992591732). So despite your myopic "gee golly it's cold during winter" the facts remain stubborn. But hey, just because eight out of the past ten years have been records for heat doesn't mean there's a trend.

Your "facts" are all WRONG.

Moreover, the UN is the WORST source of information given that it's the source of the global warming hoax. (International Panel on Climate Change.)

You are free to be WRONG, but not on this blog if you continue to spread global warming lies.

It provides the actual data regarding the claim that 2010 etc was the "warmest" ever.

I question the credibility of any blog that would state, "you are free to be WRONG, but not on this blog..."
It's when we suppress or discourage the free exchange of opinions and information that we get ourselves into trouble. Misinformation can be corrected with education and more valid information. Shouldn't that be the very purpose of a blog that seeks to positively educate and influence movements? If you just encourage or accept like views and opinions...what's the point?

Grace: This is a blog written by someone who has spent decades researching and debunking the false claims of environmentalists and so-called consumer advocates.

I oppose chemophobia and global warming, among the many false claims made it their behalf.

I see no reason to allow those spreading lies to use my blog as a platform for those lies. They already have the mainstream media to do that.