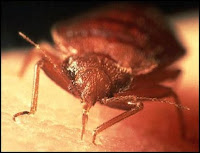 There really is no mystery to solving the nationwide bed bug epidemic. In 1946 the solution was DDT. Today the solution could still be DDT if it hadn’t been banned by the Environmental Protection Agency in the 1970s and, since then, any number of other beneficial pesticides.

I know something about this because, as a public relations counselor I have worked with pesticide manufacturers in the past and elements of the pest control industry today.

The problem isn’t so much the bed bugs as the brainwashing of Americans to believe that pesticides are worse than the pests. One of the reasons Americans live in an essentially pest-free environment in their homes, offices, restaurants, hotels, and elsewhere is the widespread use of pesticides, despite decades of effort by environmental organizations to spread and maintain an irrational fear of pesticides.

In the years following World War Two, the pest control industry had eliminated bed bugs to a point where today’s generation of pest control professionals literally had no experience dealing with them when they began to reappear in American homes, hotels, and other structures.

What is the Environmental Protection Agency’s answer? It is to hold bed bug “summits” in which industry and other experts testify to the obvious necessity to authorize the use of existing pesticides and expedite the registration of new formulations to rid the nation of this pest.

Today there is only one pesticide, Propoxur, known to effectively knock down a bed bug infestation, but when Ohio pest control professionals asked the Environmental Protection Agency for permission to use it, it was denied.

In December, Forbes magazine had an article, “America’s Most Bed Bug-Infested Cities.” Is it any surprise that three of Ohio’s cities, Cincinnati, Columbus, and Dayton, were identified as the most infested?

A January 11th article in The Wall Street Journal, “City’s Problems with Bedbugs Getting Itchier” reported a seven percent increase in complaints about bed bugs. “Nationally,” the article noted, “one out of five Americans has had a bedbug infestation in their home or knows someone who has encountered the pests at home or in a hotel, according to the National Pest Management Association.”

The bed bug epidemic owes more to governmental regulation than to the experience and expertise of pest control professionals, all of whom must be licensed and certified by their respective States. Given the pesticides to address the epidemic, the industry could eliminate it.

It is shameful that America has to endure this epidemic, not just in terms of the physical harm that people encounter from it, but because it is entirely preventable. We are fortunate that bed bugs do not spread disease, despite the discomfort of their bites.

The last EPA bed bug summit heard 34 suggestions that would expand the bureaucracy at every level of government and expand training and licensure requirements. The answer is not more bureaucracy, but less. Not more paperwork, but the application of existing and new pesticides to rid America of the bed bugs.

The answer is more realism, less fear-mongering about pesticides, and the removal of regulatory barriers so that the pest control industry nationwide can do what it does best, eliminate bed bugs and other insect pests that spread disease and destroy property.

This madness, the banning of workable solutions like: internal combustion engines, DDT, Nuclear Power Staions, Coal Fired Powered Stations, Dams, is to my mind, the result of an over indulged, brain-washed, TV couch-potato population.

I do hope that the bed bugs spread, through-out the whole of the USA, into the offices of the sheriffs, Mayors, and Governors of your states. Maybe some groin and cajones scratching, in sympathy and concert, with the poor in Africa is required for the people to realise that they've been had!

You sure got this one right, Alan, and TheJollyGreenMan is absolutely correct.

However, I have a better reason for the madness, and it is yellow journalism, which has run rampant ever since 1963, following the publication of Silent Spring in late 1962, a book chock full of sensational pseudoscience.

Yellow journalism has been propelled greatly by television, then color TV, then the Internet.

And it was not exactly "the EPA" which banned DDT. The scientists working for EPA at the time recommended that the use of DDT be continued, only in a much more directed fashion. I.e., not spray it around so abundantly. It was William D. Ruckelshaus who personally banned DDT, over the objections of EPA staff scientists.

I don't guess that any competent scientists would even take jobs at EPA anymore.

While DDT may be worth a try, last time I checked, almost all bedbug populations frolic in DDT like a day at the beach. By all means, try to find a pesticide that will control bedbugs for the time being. However, natural selection being what it is, sooner or later [usually about 25 generations and bedbug generation time is about 2 months, so about 3 years] the bedbugs will frolic about the newly applied pesticide without effect.

Its called pesticide resistance and it is 100% guaranteed with continuous exposure to a pesticide.

On the other hand, sustained 130-145 degrees F for an hour or 2 or prolonged periods below freezing is and always will be 100% fatal to bedbugs.

deal with the sad realities and stop living in a fantasy.

@Sandy: It's not quite as simple as you describe and I am well aware of pesticide resistance.

The point is that we do not have an equivalient to DDT in terms of dealing with a nationwide bed bug epidemic and for that we can thank the EPA.

The heat and cold solutions you offer are used in a variety of ways and situations by pest control professionals these days, but not every space lends themselves to them.

I'm not a big fan of DDT, but I'm a lesser fan of bedbugs. I had them this summer, Columbus style. I cannot begin to describe how awful they are. At least they were isolated in 3 rooms, but they ruined my summer, and I've still got scars from their bites. One of the worse things about bedbugs that I don't see discussed outside of bedbug forums, is the psychological ramifications and stress. Lay down for 5 minutes and you can feel them crawling on you, even if they aren't. Luckily I found a very good local exterminator (not a chain or franchise) who got rid of them in one visit and a followup.

Bring back DDT, but develop other remedies as well. Bedbugs won't go away on their own.

DDT is worthless against bed bugs, as most chemicals are becomming against them, basically any generation that survives a blast of chemicals will breed and their offspring will become immune to the chemicals. After you are done reading this site visit http://www.bedbug-inspector.com here you will find an abundance of bed bug info.

Nice blog...Bed bugs have gotten bad! I've been reading a lot of material from http://www.pestmanagementinc.com/ on bed bugs. You should check it out.Bed Bugs Louisiana