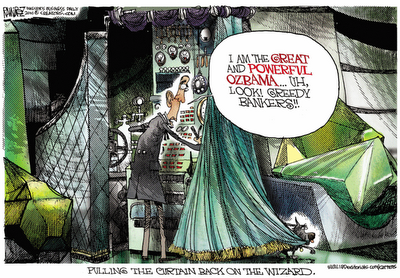 After the brief period of intoxication with candidate Obama’s rhetorical skills, the promise of “hope and change” became the business of governing a nation still reeling from a major financial crisis and issues of war in Iraq and Afghanistan.

As the euphoria subsided, reality in the form of growing numbers of unemployed, the homes that continued to be foreclosed, and the growing realization that Obama’s attitudes toward America and his view of the world were antithetical to our well-being and completely out of touch with what was actually occurring.

John F. Kennedy’s first thousand days in office included continuing and expanding the nation’s space program. Obama has, in effect, shut it down. The Bay of Pigs fiasco in Cuba was sobering and the expansion of U.S. participation in Vietnam’s civil war became a national tragedy, but Kennedy’s assassination, his martyrdom, as well as the myth of Camelot that included his beautiful wife, Jackie, lives on.

By contrast, Obama’s first thousand days, a marker in time he recently passed, has been one long series of astonishingly bad judgments that have his polling numbers heading south. There is a widespread and persistent view that he has taken America in the wrong direction.

As the 2012 campaign begins to gain momentum it is worth taking a moment to briefly review the record.

He has overseen the tripling if the national debt. It stretches to the Moon and back. For the first time in the nation's history its Triple-A credit rating has been reduced.

Billions spent as a “stimulus” to the economy have done little more than waste taxpayer’s money. It was and is a political slush fund, not much different from similar programs during the New Deal era of Franklin Delano Roosevelt. It is distinguished by its emphasis on “green jobs” that are best symbolized by the Solyndra scandal; jobs created that are each measured in millions “invested.”

Obama’s focus from the beginning, however, was the imposition of universal health care in the form of a 2,000 page piece of legislation dubbed “Obamacare” which has already been repealed by the House and will be the subject of a Supreme Court case to determine its constitutionality or lack of it. Americans hate it.

All administrations have their scandals and Obama’s is no exemption. Still festering is the ATF program, “Fast and Furious”, that actually facilitated the sale and transfer of guns to the drug cartels operating out of Mexico. The Attorney General appears to have been caught in a lie regarding his knowledge of it. It cost the life of at least one Border Patrol officer and who knows how many victims of the cartels.

In addition to the many “czars” Obama appointed to oversee public policy---many of whom not vetted by Congress---his cabinet appointees have proven to be ideologues more interested in advancing the global warming hoax and restrictions on America’s access to its vast energy reserves than facilitating a greater degree of energy independence and job creation.

The Environmental Protection Agency has literally gone rogue, requiring Congress to constantly pass legislation to restrain it from further damage to the economy.

Obama’s greatest contribution to life in America has been to make Americans so jaded that they no longer even ask if he was or is eligible to be President. He has boldly hidden virtually all of the paper trail of his life from public examination and the “birth certificates” he has offered have been, according to experts, forgeries.

Throughout his first thousand days, he has expressed contempt and disdain for almost every aspect of American society; its “millionaires and billionaires”, for the “corporate jets” used to facilitate travel in the pursuit of business expansion, for Wall Street "fat cats", for the entire medical profession who he suspects of recommending expensive treatments to patients when a cough drop will do. But oh how he loves those unionized teachers!

More recently his support of thuggish union behavior has been on display along with support of the “Occupy Wall Street” protesters that mock American values in favor of vague demands for “social justice.”

In pursuit of a second term, he is using class warfare and the race card. He is claiming falsely that Republicans have never offered him a jobs program when it is perfectly obvious they have.

He has gone from having a Democrat-controlled Congress from 2009-to-2010 that had to be bribed and threatened to pass his Obamacare law to the loss of the House of Representatives, largely due to the spontaneous rise of the Tea Party movement. His latest “jobs” legislation, introduced in an unprecedented joint session of Congress, was unable to secure even the support of Democrats.

There is a word to describe his first thousand days. It is “failure.” As this is being written, he has some 460 days left of what is surely his first and last term in office.

Alan, you might also remember that the very first act passed by JFK was to authorise The Peace Corps, an organisation which still operates today to alleviate poverty and illiteracy around the world. Almost 50 years ago, what a legacy.

And what did the current incumbent of the White House first sign into law? The law to cover his past. How shameful!

Obama's First Thousand Days were 999 too damned many...

Has anyone heard of a “Guns and Religion” counter-revolutionary movement - or perhaps “Guns and Bibles?