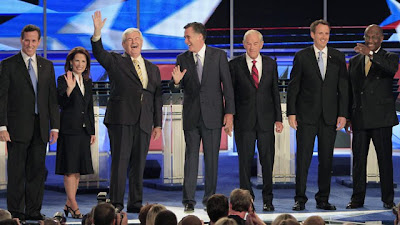 I had an undemocratic thought recently. Is it possible to have too many political debates? Maybe it’s my age or just impatience with these sound bite marathons, but I think it is impossible for any candidate to sensibly reduce his or her political philosophy into a thirty-second response to a question or a minute’s reply to a follow-up. In fact, I think it is idiotic.

There’s much more to be said for the individual interviews accorded the candidates on various news shows. The extended format, even if it is merely five or ten minutes, provides a candidate the opportunity to more reasonably explain themselves and, at the same time, more time for the viewer to get a sense of their personality, their demeanor when challenged, and to determine if they are making any sense.

Understanding this, Herman Cain came up with a clever “9-9-9” gimmick to offer as an economic plan. It is entirely likely that a lot of people have not even visited his website to find out what it is or even understand it after it has been explained in the debate format.

I like Cain, but I mostly just heard the word “taxes” and had to check further to discover he wants to level them out and add a national sales tax. I live in New Jersey that has more taxes of every description known to man and God than any other state. I don’t want another one.

What I really want to hear from any candidate is a vow to eliminate the Departments of Education and Energy, along with the Environmental Protection Agency for starters.

Even President Reagan said he wanted to eliminate the Department of Education, but that did not occur.

Now I hear you say, but Alan the last debate on Bloomberg television lasted two hours. And, yes, there was a lot of lively discussion, mostly supplied by Newt Gingrich who has more good ideas in two minutes than are heard from all the others. By contrast, Ron Paul has more nutty notions to fill the void. Neither has any chance of securing the nomination and both knew that going in.

Then there’s Jon Huntsman who nobody had ever heard of and Rick Santorum and Gary Johnson, none of whom has a realistic chance of securing the nomination. Rick Perry has performed so poorly in the debates as to eliminate himself from serious contention. Add to them, Michele Bachmann whose star flashed brightly in an Iowa straw vote and burned out within days. Tim Pawlenty is already long gone.

So, yes, debates are a good thing.

As of November 6th, we shall be a year from the next election and what we are witnessing is an insane scramble among various primary states to be the first in line. If it keeps up, we shall be see the first primary set for just before Halloween.

Debates have been a staple of the election process and in earlier times before there was radio or television they provided entertainment and education for Americans who have always loved the blood sport of politics. The Lincoln-Douglas debates are etched into the nation’s history, but I can barely recall what Obama had to say when he campaigned against Hillary for the nomination. For that matter, it doesn’t matter because he was lying then and about everything ever since.

There is a law of diminishing returns on the value of debates and I doubt that too many people will be tuning in to hear those yet scheduled.

The irony of the debates is best seen in the autopsies performed on them by the various news personalities and political pundits who participate by asking questions or who are enlisted to comment on them. The fact that they may likely have their own biases is rarely calculated, but they all seem to agree at this point that Mitt Romney has the Republican nomination sown up so that voters can just skip the remaining debates.

Despite my opinion regarding the number and manner in which the debates are conducted, the fact remains that they are very useful for those who are actually likely to show up and vote. If a lot of Democrats stay home on Election Day, it will simply confirm that even they have concluded that Obama is a dunce. I have no doubt that Republicans will turn out in record numbers.

The debates between the Democratic nominee, Barack Hussein Obama, and whoever the Republican nominee may be are going to be the ones to watch. Obama will no doubt bring a long list of people and events to be blamed for his failures. The Republican will only need to show up.

After there is a field set, a Dem and thought to be GOP guy, then, let them debate, no holds barred...

It may be your age of course; or mine for the matter of that. Apart from the waste of precious time which I'd rather put to more useful purposes like just hanging around: who cares much what politicians have to say? Only fools. Most of those guys are mostly lying. It's decennia ago when I judged, maybe wrongly, that it's all part of the Entertainment Industry. And a pretty rotten part, at that.

Current circumstances call for bolder action.
The Phase 1 Enhanced Plan incorporates the features of Phase One and gets us a step closer to Phase two.
I call on the Super Committee to pass the Phase 1 Enhanced Plan along with their spending cut package.
The Phase 1 Enhanced Plan unites Flat Tax supporters with Fair tax supporters.
Achieves the broadest possible tax base along with the lowest possible rate of 9%.
It ends the Payroll Tax completely – a permanent holiday!
Zero capital gains tax
Ends the Death Tax.
Eliminates double taxation of dividends
Business Flat Tax – 9%
Gross income less all investments, all purchases from other businesses and all dividends paid to shareholders.
Empowerment Zones will offer additional deductions for payroll employed in the zone.
Individual Flat Tax – 9%.
Gross income less charitable deductions.
Empowerment Zones will offer additional deductions for those living and/or working in the zone.
National Sales Tax – 9%.
This gets the Fair Tax off the sidelines and into the game.

Please do not become a part of the MSM!

Rush Limbaugh has it right - the name of the Ruling Class Republican game is to get their stooge RINO Romney nominated as soon as possible.

Hence the early primary elections made even more EARLY, before the Republican rank & file can get behind a stalwart Republican who I hope is Lincoln reborn, because we will have a major insurrection soon.

Environmentalism is a pseudo-pagan religious movement which represents a host of issues that cannot be outlined on a balance sheet. Environmentalism has caused prices to soar and jobs to be lost….a lot of them. Fix that and you fix a basic problem. Everything will get better automatically.

So this brings me to my point. Why aren’t they bringing up (either positively or negatively) these people’s past records on environmentalism as a prime issue, especially global warming? Here is one site worth looking at.
http://www.redstate.com/streiff/2011/10/07/mitt-romneys-troubling-appointments/

Rich: You're right. Why, indeed, haven't the candidates been asked their views on global warming or climate change? Or, for that matter, about foreign affairs issues?