Will Warmists Face Justice for their Deceptions?

When you murder someone the case is never closed. The same holds when you murder the truth. No matter how long it takes, truth is defended despite all the calumnies heaped on those who stand firm against the lies and the propaganda intended to persuade those who have been deceived.

Ultimately, truth is its own defense. There never was a shred of truth in the claim that humans were causing the Earth’s climate to heat up by using so-called “fossil fuels” and engaging in manufacturing and other activities. There was no dramatic “global warming” in the 1980s until the present.

The Earth’s climate has warmed very slightly since the end of the Little Ice Age, dated to around 1850. Five hundred years of extremely cold weather had gripped the northern hemisphere starting around 1300. The much heralded “climate change” is, unlike the weather, measured in terms of centuries, not days, weeks or years. It is used by politicians that do not know what they are talking about. It is also used by charlatans, but I repeat myself. 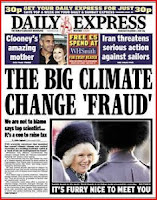 Under the direction of the United Nation’s Intergovernmental Panel on Climate Change (IPCC) a massive fraud was engineered. The object was to turn carbon dioxide (CO2), a common though minor atmospheric gas, into a commodity that could be traded in exchanges around the world that would issue “carbon credits” to utilities, industrial facilities, and others who would be required to pay for permission to produce energy and products. It was an audacious scheme.

It began with the UN Framework Convention on Climate Change, otherwise known as the Kyoto Protocol. It set binding targets for the reduction of CO2 by 37 industrialized nations and the European community and was adopted on December 11, 1997 and entered into force on February 16, 2005. The U.S. never signed the Protocols. They were rejected by a unanimous vote in the Senate.

It was a complete lie without any basis in science. C02 plays no role in climate change and reducing whatever amount industry and other human activities might produce would be meaningless.

Surely the people behind the scheme knew this. The IPCC charged a small clique of climate scientists to come up with “proof” that global warming was happening. In England they were located at the University of East Anglia’s Climate Research Unit and, in America, they were led by Dr. Michael Mann working first at the University of Virginia and later at Penn State University.

Mann’s research, assisted by co-authors Bradley and Hughes, was published in 1998. “Northern Hemisphere Temperatures During the Past Millennium: Inferences, Uncertainties, and Limitations” became famous for a graph dubbed the “hockey stick”. Its sudden upward curve, intended to demonstrate a dramatic increase was based on tree ring reconstruction of climate over a thousand years.

To say it attracted attention is an understatement. It and other studies produced by the IPCC clique became the cornerstone of the “global warming” hoax. The problem for Dr. Mann was that Steve McIntyre, a Canadian mathematician in Toronto, along with Ross McKitrick of the University of Guelph concluded it was bogus science and published a paper in 2004 criticizing it.

In science, when a theory or hypothesis is put forward, the data supporting it is as well. Years went by before McIntyre could get access to it. The tree ring data had been provided by Keith Briffa of the Hadley UK Climate Research Unit. Neither Dr. Mann, nor Briffa made it available, but McIntyre was able to secure it from another source. When he plotted all the tree ring data, not just the parts cherry-picked by Mann, the “hockey stick” disappeared.

In November 2009, thousands of leaked emails between Dr. Mann and other "warmists"---scientists responsible for the global warming hoax, revealed nothing less than a massive fraud.

Flash forward to a freedom of information (FOI) request by Chris Horner on behalf of American Tradition Institute’s Environmental Law Center. Despite stonewalling for years, Dr. Mann’s former employer, the University of Virginia complied in May 2011, agreeing to release Dr. Mann’s computer files containing the data he had kept hidden for more than a decade.

Serendipitously, a similar FOI issued to the National Aeronautics and Space Administration (NASA) has revealed the level of financial gain received by another key player in the global warming hoax, Dr. James Hansen, a longtime NASA employee and the man credited with generating the hoax with testimony before a congressional committee in 1988. He has been the director of NASA’s Goddard Institute for Space Studies since 1981

It turns out that in 2010 alone he received “between 236,000 and $1,232.500 in outside income”! When you add in all the awards and speech fees Dr. Hansen has received over the years it is a tidy sum while he exploited his taxpayer-funded position. The agency had resisted disclosing this information for years, but as a federal employee Dr. Hansen waives privacy interests as a condition of employment.

A former government employee, Vice President Al Gore, became the face and voice of the hoax, earning millions in the process.

What has the global warming cost Americans? Joanne Nova and the Science and Public Policy Institute has estimated that the U.S. government spent more than $32.5 billion on climate studies between 1989 and 2009, nor does that include about $79 billion more spent for related climate change technology research, foreign aid, and tax breaks for “green energy” (solar and wind).

For deception on that scale, one might think they will be punished at some point, but it will likely be years more before those responsible for the global warming fraud will stand before the bar of justice, if ever.

Well Alan, the Australian Parliament votes this week on introducing a Carbon Dioxide tax - the biggest tax fraud to be committed against the country. Our Prime Minister and Fabian Socialist, Julia Gillard has stated that the science is in and she would rather believe the UN, NASA and other 'reputable' organisations before believing the crazy "denyers". We are beholden to the Green Party, who have hi-jacked the minority government. Unfortunately, the conservative Opposition will not win the vote count unless a few politicians from the other side - those who still have some morals - also vote against it. Two out of three Australians oppose the tax, yet the government - with a current primary approval rating of 27% - are going to force this tax down our throats. That will mean even more jobs lost to China. China in the meantime build a new coal-fired power station every week and we want to destroy the ones we have so that a few loony Greens and our illustrious PM can feel warm and fuzzy about themselves - and build solar and wind energy pie-in-the-sky to replace our power stations. Keep the Aussie tax payers in your prayers - we're going to need it when our unemployment levels rise and our standard of living drops to where our socialists can clap their hands on a job well done. And another Western country falls...

Lime Life, this is a vote to destroy Australia and demonstrates the way Greens want to drag everyone back to the stone age.

I hope the carbon tax will be defeated. Beyond that, only a citizen revolution will reverse the impact on Oz.

The press are getting excited in the UK because one forecaster has claimed that the UK is heading for a record cold winter. What is for certain is that there are many players in the debate who use the pretext of global warming for their own political or corporate ends. Here in the UK, our Government uses it as justification for increasing taxes on gas, electricity and petrol and for increasing overseas aid whilst cutting domestic spending. Conversely, the oil industry funds the opponents of global warming for very obvious reasons. Meteorology has made great strides in recent years with respect to forecasting up to about five days ahead, but beyond that, the weather and climate system is simply too complex to be modelled fully. More here: http://durotrigan.blogspot.com/2011/10/uk-winter-forecast-2011-2012-blowing.html

I say to arrest everyone who was complicit in furthering the global warming fraud. Treason in the form of the violation and usurpation of everyones Natural Rights, even when done under the guise of enviromentalism or disguised as bipartisanship legislation, is still treason !!!. Treason is a capitol offence, that deserves capitol punishment !!!.

I fear that there will never be a satisfying outcome in this matter. We are too far gone, too many too stupid and too many too beholden.
Here in Santa Cruz, a green, nuclear free, hate free town (honestly, by city council resolve), ones dares not suggest that there is no AGW for fear of getting your car keyed or worse. It is being taught as science at the school on the hill (dare I call it a university?) and preached as gospel by every docent at every nature walk,slough crawl and slug search.

Lobster;
While I agree with the sentiment of your post, my Grammarnasty side sez: "Look up 'capitol'." It doesn't mean what you think it does.

In nature, stupidity and bad spelling are the only capital offenses. Or SLT.