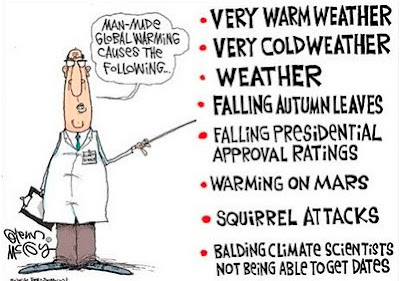 I used to write obituaries when I was a young journalist and I daresay they are one of the best read sections of any newspaper. We have arrived at a time when the obituaries for global warming (now falsely called climate change) are increasing.

The October 25th edition of The Wall Street Journal sports an editorial titled “The Post-Global Warming World” commenting on the fact that the 17th annual United Nations-sponsored climate change conference in November is likely to be an even greater flop than recent ones. Few, if any, nations will sign on to the huge hoax of reducing carbon dioxide (CO2) to save the world from burning to a crisp.

Considering the long years of media-driven drivel about global warming, the hoax should have been over by now, given the exposure in 2009 of thousands of emails between the UN Intergovernmental Panel on Climate Change (IPCC) conspirators and growing body of evidence that everything they asserted was a great steaming pile of horse manure.

If there was ever a reason for the U.S. to stop funding the U.N., this is it.

I have predicted the death of global warming several times, but like a Hollywood zombie global warming is kept alive by its massive propaganda machine and useful idiots in the media.

Since the late 1980s The New York Times has engaged in the most horrid effort to convince its readers and the world that the IPCC should be taken seriously even though its successive reports have proven to be an offense to real science and the truth. No opportunity was ignored to advance the hoax even in the face of incontrovertible facts of every description.

Global warming has become a green religion to be taken on faith, but its claim to legitimacy was the “science” it put forth. That science began to come into question when a natural cooling cycle began in 1998. Glaciers began to noticeably grow along with the ice shelves of the Arctic and Antarctica. Snow arrived earlier and in greater abundance than previous decades.

Global tropical cyclone activity has been at historic lows and the frequency of U.S. hurricanes has declined. The latest, Irene, was rapidly downgraded to a tropical depression by the time it made landfall.

So, naturally, when Elisabeth Rosenthal, a blogger on “Green” topics for The New York Times wondered out loud “Where Did Global Warming Go?” I was curious to know her answer. Turns out that, despite being heralded on the covers of Newsweek, Time, The Economist, and countless other “news” magazines, in TV documentaries, et cetera, it hasn’t gone anywhere

After lamenting that, since his visit to the 2009 Copenhagen UN conference on climate change, President Obama has failed to mention global warming every day, Rosenthal wrote “But two years later, now that nearly every other nation accepts climate change as a pressing problem, America has turned agnostic on the issue.”

No, nearly every other nation has concluded it was a massive and very expensive fraud. That is why the forthcoming UN conference is going to implode. Policy makers are trying to extricate themselves from the useless solar and wind projects to which billions were committed. As soon as Obama is out of office and the Environmental Protection Agency is scaled back to its original 1970 objectives we can begin to attend to the rebuilding of the nation’s economy.

Note Rosenthal’s use of the term “climate change” rather than “global warming.” Note, too, that the 2009 Copenhagen conference was a huge failure with none of the nations in attendance agreeing to do much more than get together again, preferably in Cancun, Mexico, 2010, where the weather, unlike Copenhagen’s was not at risk of the huge blizzard that forced Obama to leave early lest he be trapped there until the snow melted.

“Though the evidence of climate change has, if anything, solidified,” Ms. Rosenthal lamented that “Mr. Obama now talks about ‘green jobs’ mostly as a strategy for improving the economy, but not the planet.”

People who worry about “the planet” and not about real problems such as how to feed seven billion of its human inhabitants or how to provide enough electricity to keep the lights on in the world’s cities or who think “improving the economy” is a poor choice to make when more than 14 million Americans are out of work are seriously out of touch with reality.

“He did not mention climate in his last State of the Union address,” said Rosenthal, pouting over something about which neither Obama, nor anyone else on planet Earth can do anything except to clean up the mess left behind by hurricanes, floods, and other forces of nature..

The climate, measured in hundreds of years, as opposed to the weather which is unpredictable more than a week from now, is the result of the activity of the Sun, the oceans, volcanoes, clouds, and cosmic rays. It is determined by the immutable laws of physics.

“The fading of global warming from the political agenda is a mostly American phenomenon,” wrote Rosenthal, apparently unaware that the European Union is about to collapse because several of its member nations are so deeply in debt that makes the U.S. look like a paragon of prudent fiscal policy. Rosenthal appears to be unaware of the rapid political changes occurring across the northern tier of African nations called the Maghreb and elsewhere throughout the Middle East.

Since when is valuing personal freedoms, many of which are protected by the Constitution, and being suspicious of those scientists who have been claiming we’re all going to die, or questioning sweeping government intervention anything other than a deeply embedded American tradition and a very good idea under any circumstance?

Since 2008 the Heartland Institute has sponsored six International Climate Change Conferences, the last in Washington, D.C., June 30-July 1. Haven’t heard about them? Maybe that’s because the mainstream media has gone out of its way to ignore them. The conferences, however, have contributed to the growing body of knowledge disputing global warming to the point where, even in the nation’s capitol, the topic has become little more than the slow revelation of the utter mendacity of the hoax and its perpetrators.

Where has global warming gone? Onto the ash heap of the history of the last twenty-plus years of bad policies, wasted billions of the public treasure, and all of it driven by the UN’s mendacious “science.”

Before I started blogging I used to send article links to many in the pest control industry that debunked all the green issues. My view was that once you understood one of their issues you understood how to defeat all of them because they use the same logical fallacy junk science thinking in all of them.

It was so obvious that AGW was a crock that I told everyone that I was not going to send out anything more on that subject. That was about nine years ago, and I had to keep sending out article links anyway because it just wouldn’t die!

I would have never thought it possible for anything so obviously false to hold on this long. As I told a group at one meeting discussing the removal of the fumigant sulfuryl fluoride: If the internet had been around for the Montreal Protocol we wouldn’t have lost methyl bromide in the first place and this fluoride issue wouldn't be a problem now.

It is interesting that those who jumped on the ozone bandwagon in pest control and worked to eliminate methyl bromide styled themselves as "world problem solvers", by promoted sulfuryl fluoride, are now themselves in the hot seat. There really isn't any fixing stupid.

Alan - don't worry about AGW. Haven't you heard that Australia is going to save the planet with a carbon dioxide tax? We are so powerful that our taxes are going to cool the overheating planet from a room in Canberra! All hail the mighty Australian government and the soon to be impoverished tax payers.

I have one billion carbon credits for sale in this here paper bag...

I wish Mr. Caruba would comment on Richard Muller's article in' Real Clear Politics' of October 25.He purportedly was a skeptic ,but now is a true believer and even confirms the famous "HOCKY STICK" graph.

It is very confusing to have such a report, without Mr. Caruba's rebuttal.

@Joseph: Suffice to say you can dismiss the BEST report by Muller. Bottom line: There is no way to know what the Earth's temperature is as there are no enough weather stations and too many that exist are placed near structures that generate heat! The IPCC computer models are now widely known to have been deliberately distorted and falsely based on thin "data." You can visit www.climatedepot.com to get more information.

There are a number of articles outlining how Muller is a farce. Please go to Climate Depot.

I would like to add that I am somewhat confused by your comment. I hope you’re not being disingenuous! “Say it ain't so Joe”.

The truth about Muller has been blasted all over the internet. How did you miss it?

Especially this one "WaPo Punked by Berkeley Warmist Posing as Skeptic".
http://www.newsbusters.org/blogs/tom-blumer/2011/10/23/wapo-punked-berkeley-warmist-posing-skeptic

--quote--"Considering the long years of media-driven drivel about global warming, the hoax should have been over by now, given the exposure in 2009 of thousands of emails between the UN Intergovernmental Panel on Climate Change (IPCC) conspirators and growing body of evidence that everything they asserted was a great steaming pile of horse manure.

If there was ever a reason for the U.S. to stop funding the U.N., this is it. [emphasis added -hro]--quote--

Hear! Hear! This is also the conclusion one might reasonably infer after reading (my fellow Canadian) Donna Laframboise's recently published exposé of the IPCC: The Delinquent Teenager Who Was Mistaken for the World's Top Climate Expert, now available for Kindle, paperback (via Amazon) - and in tree-conserving print-it-yourself PDF.

My own view of this book (perhaps somewhat biased by the citation of some of my own work!) is:

One cannot over-estimate the importance of this book in addressing the shortcomings of far too many so-called science journalists (and other media mavens) who have been content to let the UN’s IPCC rest on its self-anointed laurels for far too many years.

Until this book, far too many questions about the IPCC had been unasked – by far too many influential people. Donna has asked these questions, and meticulously researched the answers, which she presents in an eminently readable (and easily verifiable) fashion.

(Links to details and other reviews can be found on my blog.)